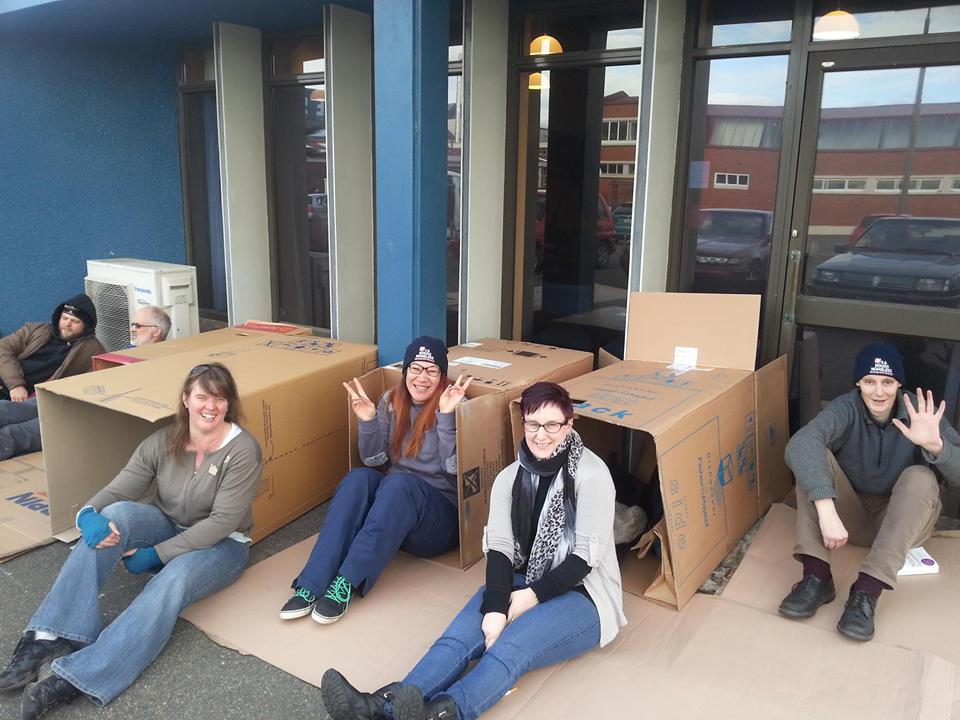 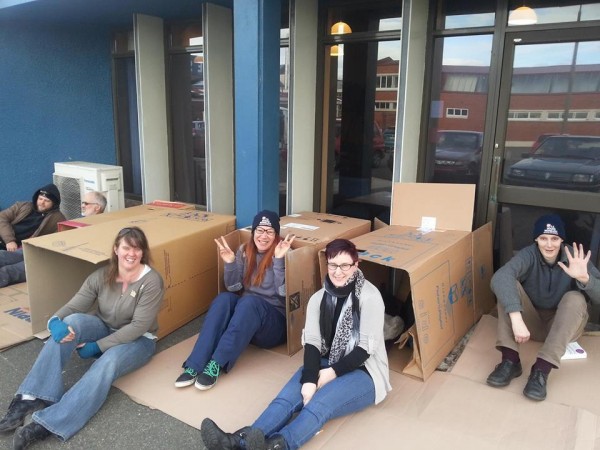 On Friday night groups of Invercargill activists and plain ole people who care took part in the 14 Hours Homeless event – sleeping out in the balmy southern climate on cardboard and couches at our Salvation Army Citadel.

It’s a rare event for locals to do something like this and it was a privilege to take part as a Green politician who once was homeless for real.

Was it like being a real homeless person? Well – honestly, no. Pics were taken on smartphones, journalists visited, books were read by torchlight, guitars were strummed, chocolate was consumed, we had a toilet, and we went back to our homes the next morning to warm up and have a hot shower.

But the experience was still worth it for all involved, including the Salvation Army and Invercargill’s Breathing Space Trust – who are fighting for a new homeless shelter in Invercargill after earthquake risk shut down our only shelter last year. They need to raise $90,000 to make this viable – so if you’ve got some pennies to spare, please donate here.

The typical response from locals on this issue is ‘Invercargill has a homeless problem???’. Yes – yes we do. And homelessness isn’t just sleeping rough under a hedge in a park. Homelessness covers yes, sleeping rough, but also those reliant on temporary shelter, such as Women’s Refuge, boarding houses, emergency housing and shelters, as well as those reliant on a friend being able to provide a couch or a floor for a night; and finally those packing into one house in unhealthy numbers, or living in dilapidated housing.

One in 120 of our people are statistically homeless. That’s around 440 Invercargill people in need of a secure, stable home. The Sallies reckon that we have around 6-8 people at any one time sleeping rough, but clearly many many more are relying on friends, whanau or organisational help for a roof over their head.

I was in this situation 14 years ago. Like many youth coming out of foster care, I found myself thrust into the world woefully underprepared for independence. Wanting to outrun my demons, I headed to Christchurch with nothing but demons and found myself gathering more of them. I bounced from an airbed (which reliably wasn’t full of air by morning) in the corner of my brother’s room, to a boarding house, to the floor of a friends Hall of Residence room, to sheltering in a student flat abandoned over the holidays with no power. After a traumatic event I ran back to Invercargill – boarding first for a few weeks with a friend, to boarding with a stranger who turned out to have a violent ex-partner who smashed my window in – getting so desperate I went back to the very people landing me in this situation – my natural parents – ran again – finally finding a secure flat and building an ‘ordinary’ life.

15 months of no place to call home, one beg away from the streets – an experience that helped shape me into the activist I am today. And since then, I have had many experiences with others who struggle to find secure housing. A close friend spent 3 years bouncing around couches before she was finally granted a 1 bedroom HNZ flat. Also a foster kid, this was the first time in her entire life she had her own home – at 30. My spare room has almost always been occupied by someone with nowhere else to go. It’s certainly not always easy to house these precious human beings, but I couldn’t live with myself if I didn’t offer practical help.

Another big issue surrounding homelessness down south is those who have a roof over their head – yes – but that roof is dilapidated and the rest of the house is too. There are a few streets in Invercargill where pretty much every house needs torn down and safe, healthy housing rebuilt. I have been in some of these houses and I’m unfortunately not shocked at what I saw. Most recently I went to one of these houses to pick up a TradeMe purchase. Floorboards missing and rotten, no back door, ripped wallpaper and scrim exposed, no carpet – and that was only what I could see standing at the broken front door. How much do you pay for this place, I asked. It’s being ‘looked after’ by a property manager who rented it to him in this state, and they charge him $150 a week because it has 3 bedrooms. Now $150 might sound cheap to Aucklanders, but in Invercargill, only a few years ago it would have been $80-100. That house was only fit for a wrecking ball, not human habitation.

So to see the government fiddle the numbers (people staying in a camping ground no longer count, says Paula Bennett), deny the gravity of the problem, refuse to build or buy more housing, decide to spend yet more time and money on figuring out how to get rid of the problem we already know how to solve by pondering who-knows-if-it-will-work hackjobs of social housing models, whinge about HNZ as if it’s a ball around the governments neck – when in fact it’s a corporation making a huge profit ($186m this year), sell a huge chunk of our state housing stock, refuse a WOF for rentals and continue the clearly grossly inappropriate spiel about ‘work’ fixing everything for everyone drives me up the wall.