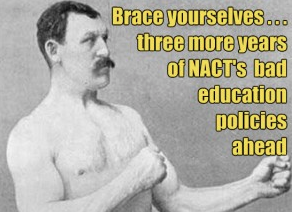 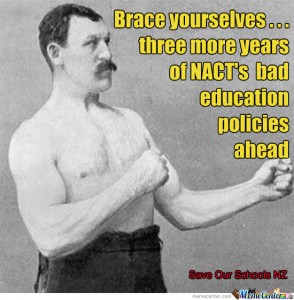 How can the government justify spending additional taxpayer funding on such a position when the existing five charter schools enrol a total of only 358 students?  How will Mr Seymour fill his time – visit each school every week, with a day a week devoted to each one?  The news that four more schools are to open next year might see Mr Seymour’s workload nearly double, with only fortnightly visits possible!

Or is it now abundantly clear that the original 2011 Agreement to “pilot” a new system was just another meaningless offering from the political spin doctors?

The latest National/ACT Confidence and Supply Agreement hints at problems that we know already exist.

The Agreement states that National and ACT have

There is a desire to see

“…strengthening and enhancing the application and governance processes in order to foster high quality applications and high-performing schools.”

Is this a coded slap in the face for both Seymour and former ACT Party President, Catherine Isaac?

Seymour, we are now told, was apparently the “policy wonk” behind the development of the NZ charter school model and the supporting legislation.

So that may be why the original NZ Model of Charter School Working Group, chaired by Isaac, did not produce any written reports, recommendations or advice to its sponsoring Ministers, even though its Terms of Reference required it to do so. (1)

Any written reports would surely have required the Working Group to have documented what it found and to set out the evidential base behind the proposed model.

Is that why there is also confusion about the real policy objective behind the charter school initiative?

On National Radio recently, Catherine Isaac stated quite clearly that charter schools were about “Alternative Education”.

But in parliament, under questioning, Hekia Parata has stated that the purpose of charter schools is to provide “Choice”, as is the American mantra.

And Jamie Whyte, philosopher and former ACT Party Leader, delights in the dream that every school in New Zealand could one day be a charter school.

After the Working Group concluded its “work”, Isaac was then appointed to chair its replacement, the Partnership Schools Kura Hourua Authorisation Board.  The primary purpose of this body was supposedly to screen the charter school applications and make recommendations to the Minister.

So why are they now keen to “foster high quality applications”?  What does that reveal about the quality of the applications seen to date?  Is this a coded response to the problems seen already in at least one of the first five schools?

And why was there not greater public debate about the creation of the four new schools, as called for by the Ombudsman, in a report released in July 2013.

“I do not accept the Ministry’s position that later disclosure of the [application] information at issue will satisfy the public interest.

The partnership schools policy involves substantial public funds and significant changes to the way in which publicly funded education provision is controlled, managed and delivered.  I consider a more informed public discourse about the creation of such schools is in the public interest.” (2)

The Ombudsman’s observation that there is “substantial public funds” involved is clearly borne out by the detailed funding provided to each school.

So, why have we seen no change at all in the lack of public involvement in the authorisation process?

Monitoring the schools is also supposed to be the function of the Authorisation Board.  But recently, in the same radio interview, Catherine Isaac had no idea what had happened at the first five schools.  This included not knowing that three schools were still below the “guaranteed minimum roll” at which they are funded for 2014, regardless of how many students are actually enrolled at the schools.   And, furthermore, two schools had experienced falling rolls.

And all this “monitoring” is supposedly on top of the normal monitoring carried out by the Ministry of Education and other education agencies, such as the Education Review Office.

So, what on Earth are all these people actually doing to earn their taxpayer funded remuneration?

Since its inception in the mid-1990s, the ACT Party has supported the privatisation of New Zealand schools.  Sir Roger Douglas’s viewing of the charter school glorification film, “Waiting for Superman” probably formed the basis of the ACT agreement with National to trial charter schools in New Zealand.

Douglas wrote a blog on the ACT Party website in March 2011 waxing lyrical about the film.  However, “Waiting for Superman” portrays an idealistic view of the “reform” agenda in American education.  Public schools are slated as failing poor children, teachers are portrayed as incompetent, unions are motivated to act only to protect their members’ interests, and parents are desperate to escape from being locked into badly under-resourced and decaying neighbourhood schools.

If only they had “Choice” like the rich people have, goes the mantra, then all their problems would be solved…

Buzzwords and clichés go a long way in politics, so, in the blink of an eye, charter schools were promoted here as the solution to “…the educational underachievement of children in poor communities.”

But hang on a minute.  If they are the solution to “…educational underachievement” then why do ACT and Mr Seymour now want to convert every school in New Zealand into a charter school?

Welcome to another three years of complete nonsense – fully funded by the NZ taxpayer of course.