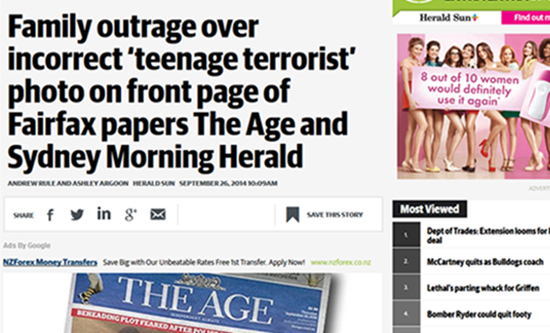 The reckless and inflammatory reporting on terrorism and national security in Australia makes ABC columnist Jonathan Green wonder whether we’d be better off without a media apparatus that can sink so low.

OPINION: HAVE we reached a tipping point where, with its mix of anxious desperation and crazy-brave self-confidence, our mainstream corporate media does us more harm than good?

Everywhere it’s under pressure from declining markets and battling business models, a situation that is as pressing for newspapers as it is becoming true for TV.

The response of news producers has been trapped somewhere between the sentimental and the self-serving. How will journalism survive, ask the journalists. Maybe we ought to wonder both whether it matters and whether something better might not evolve to replace it.

It might be that journalism is just a writing style.

I should declare here that I’ve spent my working life as a journalist, from 1979 to now. But now, reading the newspapers and watching the news, I can’t help but wonder if this is a craft that is not only losing its centre of corporate gravity and support, but also some fundamental sense of its mission and responsibility.

What sentient members of the Fourth Estate could ever set foot, for example, inside the offices of the Courier-Mail? This is, let’s not forget, Brisbane’s only morning newspaper, a monopoly provider, and, by dint of journalistic volume, the most significant newsroom in Queensland.

This is the newspaper that in recent times advised its readers of an “AUSSIE FATWA” just days after it reported on the terror raids that swept through the suburbs of Sydney and Brisbane on September 18.

“Terror Australis: Cops foil horror attacks,” said the Courier-Mail, blending the journalist’s fatal instinct for a pun with the paper’s absolute commitment to distortion, amplification and the propagation of fear to sell papers: for commercial gain.

It would only be days before a man was shot dead in Melbourne after the brutal, angry stabbing of two police officers. Did the Courier-Mail report the simple and sufficiently horrifying facts? Well no, it reported the most sensational peak in the sea of supposition surrounding them: “Gunned down after PM terror threat: POLICE KILL ABBOTT JIHADI.”

There was of course no plot against the Prime Minister, unless what is described here by the Courier Mail constitutes an elaborate conspiracy:

The Courier-Mail is of course just one among many. This is the house style of the major market tabloids that are the dominant organs of news in all our capital cities. They cry wolf, they cry terror, they fan the flames of disquiet and distrust.

‘Teenage terrorist’
Then there are the Fairfax papers, either so depleted or abjectly derelict they managed to splash the face of an utterly innocent man across the country after the Haider killing, with the indelible label “teenage terrorist”.

The Daily Telegraph sends a columnist to write a slovenly and misanthropic caricature of Lakemba, or as the Tele put it, “Sydney’s Muslim Land” as evidence of the threat that walks among us.

And then we discover that the sword carried so ominously from the police raids of mid-September, the one featured in page after page of reporting of raids that had apparently prevented “demonstration killings” and was thus by implication a weapon that might be used to sever innocent necks from heads, turns out to be a piece of plastic souvenir shop junk.

In this moment of high anxiety, the players in our commercial media have seen opportunity in a population made fearful and anxious for information.

Who threatens us? Where are they?

To which the answers seem universally to be “them” and “everywhere”.

Our politicians are not much different, but in the best of all possible worlds it would be our journalists who hold them to account.

And the consequence of this self-serving collusion in the fostering of paranoia?

This summary from the #WISH (Women In Solidarity with Hijabis) campaign is self-reported, and thus tricky to verify. But even if half right, it’s telling.

There is an issue here in the treatment of a serious social issue and one highly sensitive to the sort of reckless, and inflammatory reporting that has become typical – almost universal – in the Australian media mainstream.

But beyond that point, there is a lack of restraint, a grasping of commercial opportunity at whatever the cost and a lack of regard even for the fundamental truth, that is even more worrying.

In these end times for corporate journalism, in these desperate days when any sale is worth the compromise of basic standards of integrity and social tact, we might we wonder whether we’d be better off without a media apparatus that can sink so low.

Jonathan Green hosts Sunday Extra on Radio National and is the former editor of The Drum. View his full profile here. Republished on Cafe Pacific with the author’s permission.