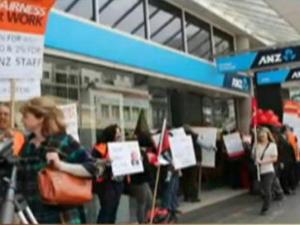 If you’ve been paying attention to the news this week, you may have noticed that ANZ bank workers across the country have been taking strike action.

Workers are walking off the job due to an offer from the Bank that offers a low pay rise for many workers, no pay rise for some, and a proposal to introduce a new “flexi-worker” role where a workers’ shift days and times can change from week to week.

For many bank workers who rely on regular, secure work on a decent hourly rate, the proposal is a significant deviation from the current state where hours are permanent and can only be changed by mutual agreement and following a fair consultation process.

Bank workers are some of the most professional people you will meet. They are loyal, diligent, smart and extremely hard working people. They care about their customers and their fellow workers. The job involves risk management, lots of training on product knowledge and processes, attention to detail, integrity and a customer service ethos. The workers who do the job deserve respect, fair remuneration and job security.

Unfortunately, this is not the environment that ANZ as a large corporate bank is creating for its staff. Bank workers are expected to serve customers quickly, while also selling banking products and reaching demanding sales targets. Some of our members are under significant pressure at work that impacts on their personal lives, their confidence and their job performance. Often the pressure has the opposite effect and leads to a demoralised worker performing poorly in the workplace and questioning their ability to do a job they’ve performed well for many years. I’ve had ANZ workers ring me in tears because they are so frustrated and upset at the culture within the workplace.

Bank workers don’t go on strike for no good reason. The Bank has put a proposal on the table that will allow them to chop and change a worker’s roster with only one week’s notice for each four week period. Never mind the worker’s family responsibilities, sports, attendance at church or voluntary work. Some workers have only been offered a two per cent pay rise. Others would receive no pay rise at all under the Bank’s offer.

All this from a Bank that made well over $1 billion in profit last year and is on track to beat that this year.

To add insult to injury, the Bank’s CEO received a 14 per cent pay rise on the backs of the workers so that he is now paid $11,000 a day. Many New Zealanders would struggle to earn that in a year.

In small towns where there aren’t large numbers of full time jobs on offer many bank workers feel trapped in a job where they struggle to speak out and can’t find another job that will pay the bills or the mortgage.

Fair pay is one thing.

Decent work with fair work conditions and practices is another equally important component of a good job.

ANZ bank workers are standing together to send a strong message to the bank that they deserve a fair deal. Many customers are supporting their stand.

I’m proud to stand with them. I ask you to support these workers too.

Rachel Boyack is a Nelson-based Organiser for FIRST Union.