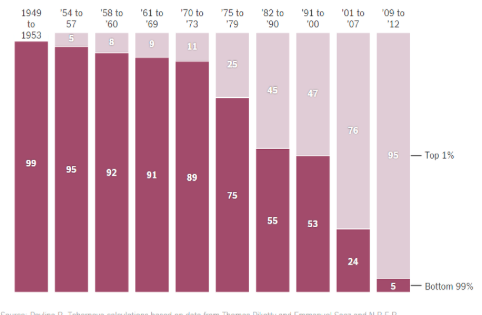 Nobel prize winner Paul Krugman highlights the growing inequality in this article in the New York Times. The left wing slogan that the “the rich get richer” is a fact of almost perverse power. The most recent period of expansion in the USA the top 1% got 95% of the income gains. They did this after creating the crisis in the first place. So instead of being put in prison for fraud and negligence they continue to rob us blind.
It is little wonder that some of the 1% are beginning to worry that “the pitchforks are are going to come for us” as US entrepreneur Nick Hanauer wrote recently in Politico in an open letter to “my fellow zillinaires”.

But why don’t citizens of the US do something about it? The Public Research Institute’s American Values surveys show overwhelming support for action to reduce the gap between the rich and the poor. In fact, the results from the Institute’s latest survey, released last week, shows a two to one majority in support for more stronger action to reduce inequality. By nearly the same margin Americans agree that the nation’s economic system “unfairly favors the wealthy.” Some 69 percent also agree that “corporations do not share enough of their success with their employees.”

I am sure opinion surveys in NZ would produce similar results. Overwhelmingly the issues of concern this election in NZ were around inequality, low wages, and poverty.

The problem is that in the US and New Zealand there is a lack of belief that voting for any of the establishment parties will actually produce the changes we need. At the same time a more radical critique of capitalism which is beginning to be advanced by the Mana Movement has yet to to win a hearing from a significant percentage of the voting public.

That doesn’t mean that radical voice should be silenced or moderated. I am confident that the continued failure of this system, and the parties that defend this system, will eventually open the eyes of many more people to what is needed. That is also reflected in the willingness of growing numbers to take action around issues like climate change, child poverty, deep sea oil drilling in just the last few weeks. Ultimately real change will come from a combination of action in the streets and at the ballot box. If Mana remains true to itself as a movement of both the streets and parliament they can be confident of future victories.