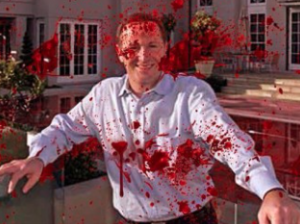 What’s the difference between John Key and a Drone? Nothing, both are remote controlled by Washington.

So after telling the country before the election that NZ would not send forces to Iraq, lo and behold now he’s won the election with a full spectrum dominance political majority, Key is suddenly now looking to join the re-invasion of Iraq.

The irony of reinvading Iraq after it was the devastating instability of the previous Western invasion for weapons of mass destruction that never existed to fight a new extremism we’ve generated is totally lost on most sleepy hobbits who have been as spooked as Australians with the latest ‘terrorism’ distractions. Australia’s 800 cops to arrest 1 person for a possible crime isn’t an anti-terrorism operation, it’s a false flag con job to silence critics of Abbott’s decision to send 600 troops back into fight IS.

At home our own hate speech merchant Cameron Slater has been steadily beating the anti-Muslim terrorism war drum, knowing what we now know about Slater’s under the table blogging practices, I wonder if it was a publicity contract with the Australian High Commission.

Let’s just go through some of the reasons sending in troops  is hypercritical madness.

-The last time we invaded Iraq was a cluster fuck of staggering proportions and has fed the current violence.

-Sure IS are extremist fundamentalists with zero regard for human rights as we define them, but so are a whole bunch of nations we cuddle up to. I haven’t seen us ban Israel for their war crimes against the Palestinians and I haven’t noted NZ doing much at all to invade Egypt or Saudi Arabia for their grave abuses of power. Hell we are apparently on the side of the Assad regime here for crying out loud. Where the Christ is the morality in that?

-There are still large questions over NZs role in Afghanistan and whether we committed war crimes by handing suspects over to known torture groups.

-There is no way we will win a UN seat on the Security Council when we are seen as America’s lap dog.

-Is NZ already helping by using 5 eyes to select targets for America? We may not pull the trigger on the drone, but are we pointing the drone?

Seeing how most NZers reacted to mass surveillance and dirty politics by rallying to Key, the sick thing about NZ right now is that Key might win 2017 if he invades Iraq.

Don’t worry, John Key is khomfortable with reinvading Iraq. All he is saying, is give war a chance and most NZers who voted gleefully agree.