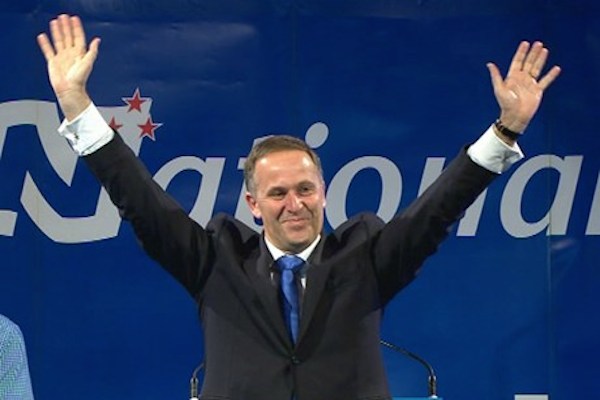 What does the National Party’s victory mean for climate action? Barring some sort of third term sea change at the heart of the government, it means another three years of business as usual.

John Key and his cabinet are apparently determined to carry on rowing the country up shit creek, and will no doubt attempt to ditch the paddle some time before the next election.

Key and Co may not recognise that they are up shit creek. In their world view, everything may still be wonderful. Their corporate sponsors are making money, and middle New Zealand is still voting for them.

But they are rowing against the tide. The laws of physics are not decided at the ballot box, and they are committing the country and the planet to future warming. As Thompson points out, we have no option but to live in a green future.

This is not a matter of politics, not a matter of left versus right. Just as the fight against apartheid was a moral imperative, we will need solutions for emissions reductions and climate adaptation whatever the ideologies of the politicians that make the policy.

This will be challenging for the National Party, which has long flirted with climate denial. But there will come a time when Key & Co have to adjust to the new reality. Time for the Bluegreens in the party to start lobbying the cabinet for action. They have been far too willing to cave in at the first sign of economic or ideological inconvenience, but they are as much a part of a climate solution for New Zealand as the Green Party or Labour.

As Nicholas Stern points out in a recent Guardian interview centred on his latest report on the economics of climate action:

“For me the two defining challenges of this century are overcoming poverty and managing climate change.

“We fail on one, we fail on the other. So I think to say that we should just switch off growth is to miss big aspects of what matters about poverty. And so it worries me. It’s also politically very naive. If you turn it into a pissing contest between growth on the one hand and climate and environment on the other and say you’ve got to choose, you’re setting yourself up for failure.”

John Key is clearly setting NZ up for climate failure. Environmentally-aware people of all political persuasions are going to have to put that right, and make sure that climate policy is not something that can be ignored for the next three years.