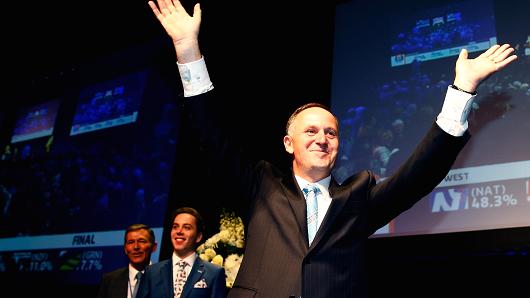 There are a number of past elections that can give the left in New Zealand guidance and hope. Two major points though. Major parties require leaders who can bridge the political divide through strength of personality, vision of what it means to lead a good life in a sustainable way, and adherence to policy that supports such a vision.

Possibly the only person who can do this for the left is David Shearer, now a more plausible leader than in 2012. He received a stunning personal vote in Mt Albert; a vote that suggests an appeal that goes well beyond party politics. I sense that Shearer is not dogmatic on economic issues, meaning that he might be open to a new approach.

Before taking kneejerk responses to change leaders, however, parties should always take time to reflect on the issues, as my review below of prescient past elections shows.

1969 should have been a dead cert election for Labour. Indeed Labour would have won despite itself had the election been in 1968, a year that the economy tanked.

1969 was our first election for which TV coverage was pivotal. And it was the first time the ‘sixties’ generation had an impact on politics. While Kim Dotcom was the joker in the pack this year, in 1969 it was Tim Shadbolt and the PYM (Progressive Youth Movement). This youth activism in New Zealand followed the huge influence of the protest movements in the USA and France in 1968.

The television and radio coverage showed a continuous barrage of shouting at National Party leaders, especially Keith Holyoake, Jack Marshall, and Rob Muldoon. The tactic backfired. National gained a fourth term, unprecedented since Seddon and Massey. W(h)anganui, a previously solid Labour electorate, even went National. (We remind ourselves that, before MMP, the electorate vote, while notionally a personal vote, was actually a party vote).

Norman Kirk, taking Labour in 1969 to its second defeat under his watch, would have been dog-tucker in today’s media environment. Yet three years later, in 1972, and in improved economic times, and despite the rise of the Values (Green) Party potentially splitting the anti-National vote, Labour won a historic victory with its two-time-loser leader.

By 1972 the sixties generation was now looked upon with substantial affection. The 1972 election result was inspired in large part by four issues of central importance to youth: the proposal to raise Lake Manapouri, compulsory military training (potentially conscription with the Vietnam War still on), French nuclear testing, and playing rugby with South Africa (especially the proposed 1973 Springbok tour). Although I was too young to vote, my birthday came up on the 1972 ballot for compulsory military training. The Organisation to Halt Military Service (OHMS) was actively planning a programme of civil disobedience. The new Labour government pre-empted this by abolishing the draft.

(In that election, former classmate who was 21 [just old enough to vote] changed his family name to Mouse and stood in Palmerston North as leader of the Mad Hatters Tea Party. A year previously, another former schoolmate, Bob Burgess, a few years older than me, took the long-haired look to the All Blacks, playing brilliantly against the British Lions and really helping to soften anti-hippy sentiment.)

Interestingly, the fourth term 1969-72 National government took a socially progressive turn, with the introduction of equal pay for women, with the McCarthy Commission reforms to the social welfare system, and with the introduction of free wage bargaining, the holy grail of the trade union movement at that time. (Indeed we should not write-off the presently elected government as also having the potential to become a progressive influence.)

My gut feeling is that either 2017 or 2020 will be an election in which a wave of issues will bring about substantial political change, regardless of the policies the 2014-17 National Government might implement. It is now that the left must conduct an open contest of ideas, so that it can robustly develop policy options that actually have a chance of improving the lives of the dispossessed, and in ways that unite rather than divide New Zealanders. The left must learn to shrug off ridicule from the mainstream media; and must learn to wear low poll ratings (in non-election years) that result from unreflective journalism. (A good example of this media cynicism was when the Green Party was contemplating a monetary policy of ‘quantitative easing’.) When it comes to new ideas, the mainstream media – especially TV and commercial radio – is the most conservative force in our society.

In 1931, the Great Depression had been in full force for a year. Economic growth was substantially negative that year, deflation was ravaging our businesses big-time, and mother Britain had been through its biggest financial crisis ever, or at least since 1720. Labour, which had supported Ward’s minority United government in 1929, offered plenty of socialist rhetoric, but (like Philip Snowden in the UK) was fiscally conservative. A counterfactual 1931-34 Labour government would most likely have pursued balanced budgets and retrenchment with at least as much enthusiasm as the hapless George Forbes. In 1931, Labour was trounced in an election that it should have won.

Labour’s somewhat Marxian leader Harry Holland was not deposed after that election. Fortuitously for the ‘progressive side of politics’ however, in 1933 Holland caught a chill (on Taupiri mountain) and died. Labour’s new leadership, especially the older Mickey Savage and the younger Jack Lee, caught the mood by promoting ‘new left’ equitarian values and monetary reform. Labour won in 1935 with the help of a split in the conservative vote, and triumphantly without help in 1938.

It was easy for Labour because Reform Finance Minister Gordon Coates paved the way by establishing his ‘brains trust’ – Bill Sutch, Horace Belshaw, and RM (Dick) Campbell – in 1933. After the 1935 election, the ideas necessary for recovery had already been subject to robust examination, and able to be implemented by a government subject to fewer political constraints than the Forbes-Coates (United-Reform) coalition government.

Who is the next Savage, and the next Lee? Could Bill English do a Coates this year, and establish a brains trust that includes genuine new thinking? While we have nothing like the distress today that there was in 1933, it is clear that the global economy in the 2010s faces huge risks. 2008 was a mere warning shot.

In 1987, the ruling Labour Party crowded out the National Opposition, appealing to voters on the right-wing side of politics. New National leader Jim Bolger was not crucified, however, for his party’s disappointing showing. (National had been ahead in the polls four months before the 1987 election.) Like Norman Kirk after 1969, Bolger won handsomely in the election after defeat. In 1985 National had dabbled with Jim McLay; but McLay never had the provincial centrist appeal that Bolger had. Was McLay a National equivalent of David Cunliffe? Was Bolger a National equivalent of Shearer?

The important lesson here is that – after 1931, after 1969, after 1987 – there were historically significant changes of government next time around. In each case there were new (but poorly understood) circumstances already under-way that eventually created a substantial change in public mood.

Yet after 1972 and 1990, the new governments revealed substantial shortcomings. Labour was unceremoniously dumped in 1975; and in 1993 the left scored what was probably its highest ever vote. It is not enough for the left to win in 2017 or 2020 by waiting for events to make a change of government inevitable, and then implementing inappropriate pet policies. New governments need new ideas that can be embraced by middle New Zealand. Roger Douglas’ 1974 superannuation pot of gold was not one of those new ideas. Nor was the 1991 Employment Contracts Act.

Another election to reflect on is the Australian election of March 1993. Paul Keating led the Australian Labor Party to victory, extending the life of the ALP government to 13 years. The Australian Liberal Party had dumped John Howard as leader in 1989, replacing him with the bohemian Andrew Peacock and then the neoliberal economist John Hewson. Neither of these men had Howard’s ability to appeal to the median voter.

When the Australian Liberals finally reinstated the right man for that job, the Liberals were able to establish a four-term government.

My final reflection relates to 2008 and the Maori Party. The left in New Zealand, to its shame, has little understood the necessity of the Maori Party joining the Key government. There were two reasons.

First, the Maori Party had to participate in government if it was to get Labour’s Foreshore and Seabed legislation repealed. That was the Maori Party’s founding purpose.

So, when Te Ururoa Flavell becomes Minister of Maori Affairs this year, please don’t write this off as sell-out. Flavell makes his party relevant by participating in government. The Maori Party, having survived the retirement of its founding leaders, now has at least a possibility of long-term relevance in New Zealand politics. By gaining a list MP (Marama Fox), voters of all ethnicities can now see that a party vote for the Maori Party is not a wasted vote. The Maori Party has the opportunity in 2017 to rejuvenate itself through its party list, and to become a constructive part of every government for the next few decades.

Learn from history. While history never repeats, those politicians (and political hopefuls) willing to take a nuanced perspective can take heart.