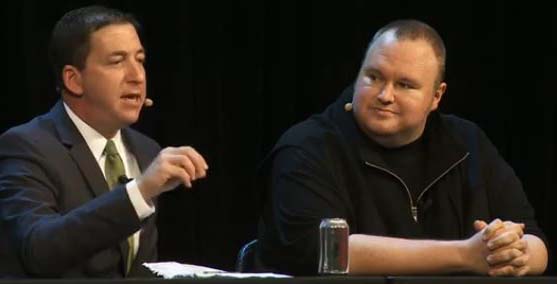 NEW ZEALAND Prime Minister John Key has been accused of allowing the secret installation of equipment that would enable spooks to tap into New Zealand’s undersea fibre optic cable as part of a covert mass surveillance system of citizens.

This was the word from globally acclaimed whistleblower Edward Snowden and Wikileaks founder Julian Assange (both speaking via video link), Kim Dotcom and US Pulitzer prize-winner Glenn Greenwald last night at a packed meeting of more than 2000 people in Auckland.

The hall was so full that another 800 people could not get into the venue at the Auckland Town Hall.

In a major political coup for the Internet-Mana alliance which organised the seminar and which is contesting the New Zealand national elections this Saturday, the three speakers painted a grim picture of individual privacy and internet freedom under New Zealand’s ruling National Party.

Dotcom told the meeting that there were only two ways to fight mass surveillance – through political mobilising, as the Internet Party was doing and through encryption.

Snowden, speaking from exile in Russia, said when he worked for the US National Security Agency (NSA), he could see the communications of New Zealanders through a network of sensors which allow spy agencies to search the content of all communications all over the world.

“So I can see everything, I can see what book you look at when you searched Amazon.com last week, I can see who you talked to, I can see the text messages you sent, I can read the emails you wrote” through the sensor networks, Snowden said.

“If the government is checking boxes off about our lives and how we are going to live it, election time is when we get to check boxes,” said Snowden.

‘Project Speargun’
Greenwald, the custodian of the archives of information leaked by Snowden, said Key had “radically misled the public” by failing to admit until last weekend that his government had created a plan to engage in mass electronic surveillance of New Zealanders.

Key had claimed that this was only a proposal which he never approved, but Greenwald produced a previously top secret document from the NSA  showing that this proposal had been named ‘Project Speargun’ and that phase one of the project had already been completed – the secret installation of equipment that would allow spies to tap into the Southern Cross cable – New Zealand’s main submarine data link with the rest of the world.

“For prime minister Key to stand up and say this was just a proposal…that never got implemented, the documents that we published today make clear that this is an outright falsehood,” said Greenwald.

Key had also lied when he said that changes to spy laws made last year would not enable government to spy on New Zealanders, said Greenwald, producing evidence that in fact, this law was specifically changed to enable the NZ government to engage in mass surveillance of New Zealanders.

Snowden yesterday published an article blowing the whistle on his own work at the NSA in which he interacted with “enormous amounts of metadata about the communications activities of New Zealand citizens, much of which has been processed by the GCSB”.

‘Five Eyes’ alliance
Greenwald told Radio New Zealand yesterday that New Zealand, as a member of the so-called ‘Five Eyes’ intelligence alliance of Australia, Canada, New Zealand, the United Kingdom and the United States, participated in briefings on all spy programmes that all the countries were carrying out and was “every bit as involved” in mass surveillance programmes as the other countries.

The GCSB used its “position in the Pacific…to spy on countries that the United States is unable to spy on” either because of hostile relations with those countries or because of a geographical disadvantage, Greenwald told RNZ.

Assange said Five Eyes was not an alliance of nations, even though it was often presented as this, but only an alliance of spy agencies which aimed to maximise their own power without the consent of their citizens.

Labour and the Green Party recently said they would “review” GCSB legislation if they won the elections this weekend, but stopped short of saying that New Zealand should pull out of the Five Eyes alliance.

Privacy International has issued a legal challenge against the British government at the European Rights Court, asking that the cross-border Five Eyes agreement that authorises the sharing of intelligence between Britain, America, Australia, Canada and New Zealand be made transparent.

The livestreaming video of the “moment of truth” political surveillance meeting last night.