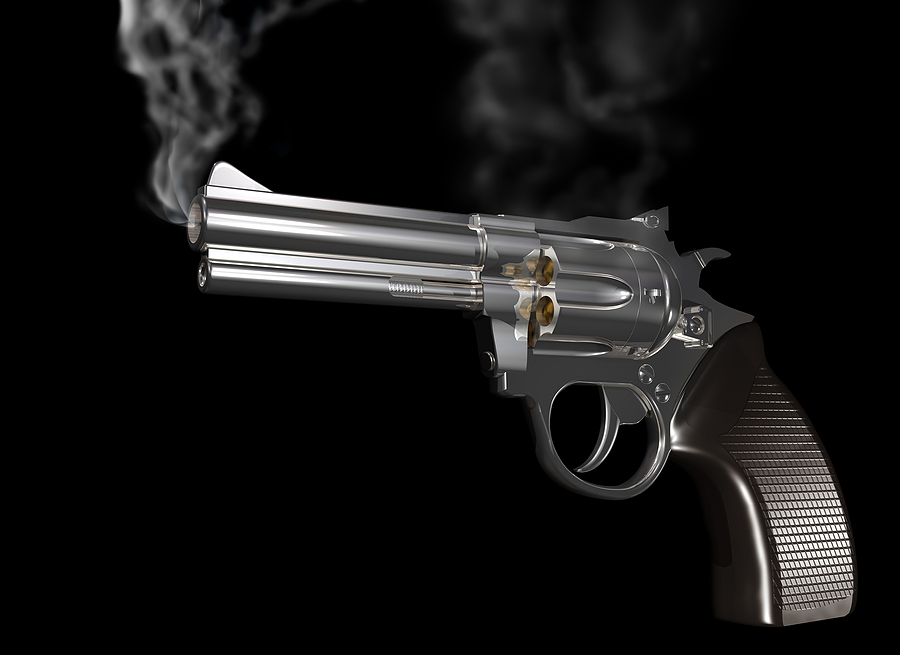 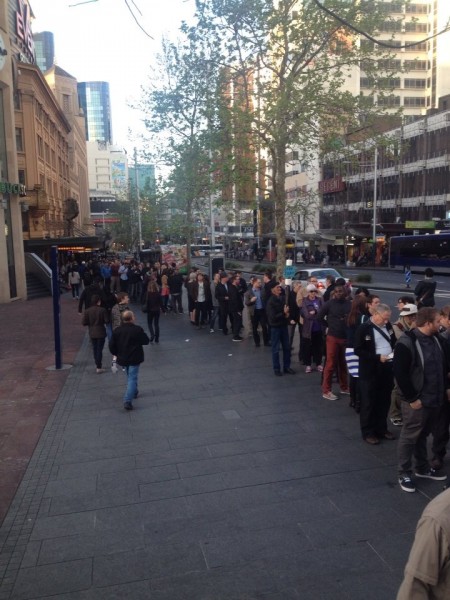 There were queues unlike any the Town Hall has seen, 1000 were turned away once it became full… 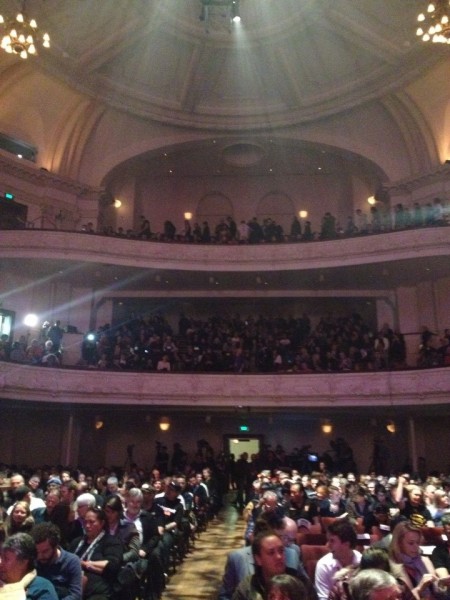 …full to the rafters. The energy and atmosphere within the room was extraordinary, and it begun… 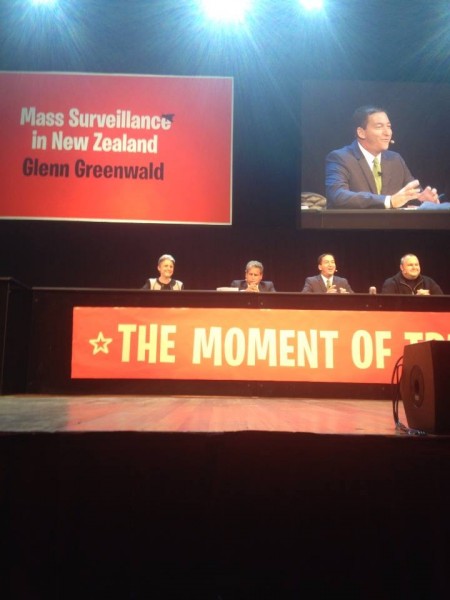 …Glenn Greenwald is amazing. His strong words and powerful argument are impossible to deny. When he talked about how unusual it was to have a PM call him childish names, the entire audience erupted in laughs and cheers. These are henchmen… 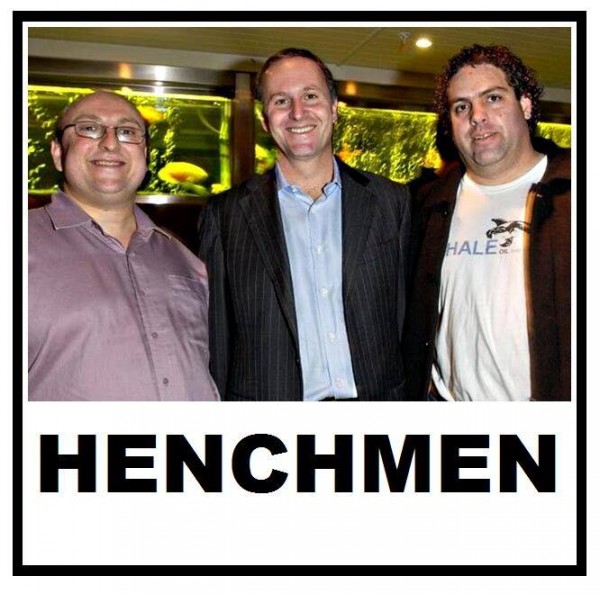 …Glenn Greenwald is no ones henchman.

Glenn’s credibility can not be dented by wannabes like Metro Editor Simon Wilson who had the audacity to attack him in the private media room.  Sad, so very sad.

Then, a moment that no one was expecting, Edward Snowden… 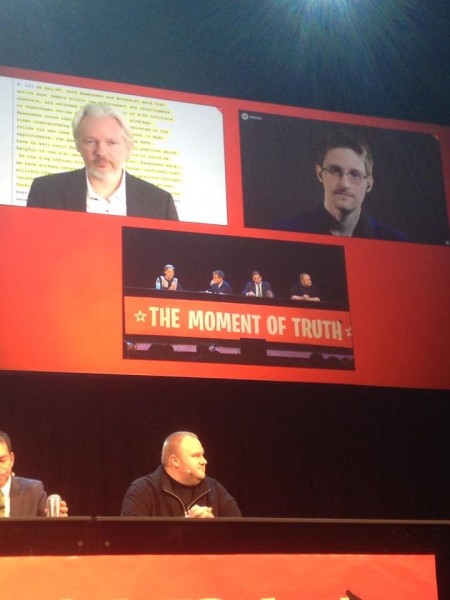 …Snowden spoke with such integrity, announced that there were 2 NSA bases in the North Island, outlined how he had personally been able to look at NZ metadata and how the NSA are running mass surveillance programs in NZ. It was compelling, it was detailed, it was the truth.

Operation Speargun was set up to tap our Southern Cross cable and was waiting for the new GCSB law to pass, the GCSB law that Key claimed stopped mass surveillance, yet every other legal expert said would allow for mass surveillance. So the evidence is that Operation Speargun was running and was simply waiting for the legislation to pass, the very legislation that the GCSB went and briefed the NSA on. The documents Key has released claiming that he stopped this plan show nothing of the sort. Operation Speargun went ahead, the NSA are now mass spying on everything.

One surprise was the decision to put Kim’s email to Parliament’s Privileges Committee. That was the legal advice given Kim and seeing as it’s his life that is about to be decided by the Court process, you have to allow him that, but I think it was a strategic blunder and stupid to not front with his Hollywood email mostly because NZ journalists would hold onto that and use that to stop the important information Snowden provided getting heard. In terms of the email being a fake, The Standard have pulled that claim apart and Gordon Campbell provides an incredible timeline that helps back up Dotcom.

It looks like Key not only betrayed the Unions in the manufactured crisis at The Hobbit, he also betrayed NZ sovereignty by entrapping Kim Dotcom for Corporate Hollywood.

Personally I love the blistering attack Kim made on the media…

“[The public] don’t care about my case tonight. They care about being subjected to this evil mass surveillance.”

Finally, he appeared to lose his cool and angrily lectured the media: “You have an obligation after what you have learned tonight to take the information you have learned from Glenn Greenwald.

“You have failed New Zealanders in the past — look at Dirty Politics,” he said, referring to the book about the alleged National Party attack politics campaign. “You need to wake up and do your jobs.

“My case only affects me. It doesn’t matter tonight. That’s why we didn’t make a big deal out of it. You need to get your priorities right. We have focused on the much bigger lie, which is every single New Zealander subjected to mass surveillance.”

If Kim has seriously presented a fake email as his evidence, then it would be the end of him being taken seriously. Let’s see what happens with the Privileges investigation.

So what does the media say? ‘There is no evidence’ – WTF? NSA documents talking about a mass surveillance plan, talk about the progress of that plan and talk about their expectations of the new law – BUT THAT’S NOT EVIDENCE???

NZ has one of the lowest corruption rates, not because there is no corruption but because NZers refuse to have the intellectual curiosity to ask questions! This is why the meeting had to be in the last week of the election, because the mainstream media who have been outed as contaminated by Whaleoil were always going to simply scream ‘no smoking gun’. I get the feeling that Radio NZ will not be happy until they actually see a smoking gun, Brent Edwards was a joke on the issue this morning by saying ‘there was no evidence’.

There have been some notable exceptions, Andrea Vance has written an incredible review, the Herald has written a solid article and Keith Ng has done a strong blog on Public Address.

Dirty Politics shows our media have failed in their obligations and that’s why the future is to talk past them and over them via social media. Snowden and Greenwald  have done our country a huge service, well beyond the timid, tamed and compromised NZ mainstream media ever have. It is far easier for the journalists to scream no evidence when evidence is presented, but note how they all seem to accept Key’s assurances that the GCSB is just some big misunderstood Norton virus protection… 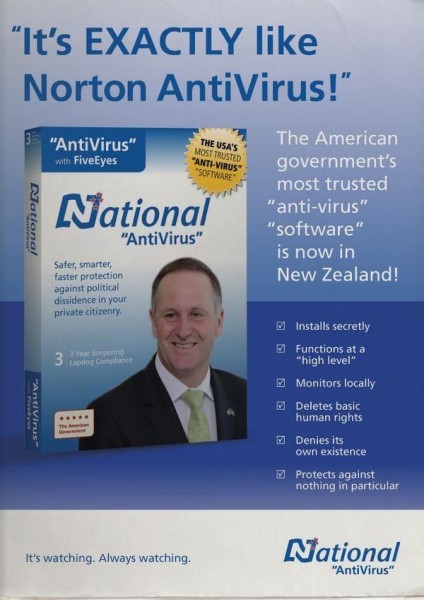 …the media’s small mindedness and narrow viewpoint will tell you there was no evidence. There was, they just didn’t want to see it. The media in NZ are the reason we can’t have nice things like a mass surveillance free state.

The triviality of the Key vs Dotcom ‘bombshell’ is secondary to Key vs our entire political, economic & cultural sovereignty – that’s the real moment of truth.