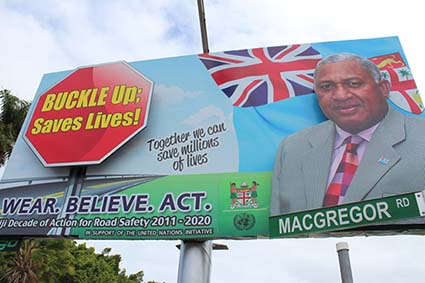 BLACKOUT DAY – Monday, day one of the “silence window” in Fiji leading up to the close of polling in the general election at 6pm on Wednesday. And this is under the draconian threat of a $10,000 fine or five years in jail for breaches.

These are the penalties cited in a media briefing distributed to journalists covering the elections last week. But a closer reading of Part 4 “Electoral campaigns and the media” in the Elections Decree 2014 reveals that there are even harsher penalties of up to $50,000 and 10 years in jail for offenders.

And this could include social media offenders. The International Federation of Journalists was quick to pick up on these heavy penalties and fired off a protest.

“This is a gross violation on the freedom of the media ahead of one of the most pivotal elections in Fiji history,” says IFJ acting Asia-Pacific director Jane Worthington.

In an interview with Radio New Zealand Mediawatch presenter Colin Peacock, who has a keen interested in digital media developments, the Pacific Media Centre’s Thomas Carnegie was told the penalties were “unduly harsh” and would restrict political debate just when it was needed the most.

Confusion and frustration was paramount in Suva as the global media contingent tried to get a handle on the full implications of the decree for their news operations. Some media tested the apparent boundaries.

Pacific Scoop ran a story about a massive hoarding with an imposing image of Fiji First leader Voreqe Bainimarama, finally hoping to cement the legitimacy of his prime ministership after seizing power in a military coup in December 2006, which appeared to be violating the blackout.

But when journalists challenged this apparent breach, the Media Industry Development Authority (MIDA) defended the “buckle up” billboard as a road safety advertisement and part of ongoing ordinary government business.

According to the Section 118 media guidelines:

“Media must not allow any political activity, including advertisements, interview and political actors, and conduct debates or commentaries that would be deemed to be advocacy or has the potential to influence voters – eg. no candidate can be interviewed on a radio talkback show [after] 7.30am.

“Publication of all material pertaining to political activity in the mainstream media, including magazines, must cease at 7.30am on Monday. Anything published in magazines prior to the blackout period may remain as is.”

But during this “silent” period, the media is still expected to report on electoral “administration” activity.

The International Federation of Journalists criticised the “gross violation” of press freedom and Reporters Without Borders condemned the “out of proportion” penalties for breaches.

A total of 450 journalists and media staff has been accredited to cover the elections, including 37 from foreign news organisations.

The largest contingent is from the state-run Fiji Broadcasting  Corporation with 97 staff, followed by The Fiji Times with 80 – double that of their rival Fiji Sun (40).

The award-winning student newspaper Wansolwara at the University of the South Pacific has 40 accredited student journalists.

From New Zealand, AUT University has two student journalists from the Pacific Media Centre on the ground with Repúblika and Wansolwara – and they have been there a week already with a robust news file on Pacific Scoop and multimedia files on the PMC YouTube channel. None of the other nine NZ journalism schools have sent anybody.