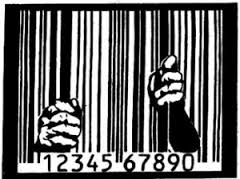 Well, at least we now know how National intends to deliver that extra hundred and fifty thousand jobs they’ve promised us. Although on sixty cents an hour, it’s not *quite* the reasonable pay packet – or, hell, living wage that National never seems to promise to match.

Yes, that’s right – National is intent on bringing back the work-house; with proposals announced this week for all of New Zealand’s prisons (assumedly including the privately owned ones) to be turned into “working prisons”.

Now for some stupid reason, the Green Party decided the best way to front-foot this issue was to announce “support in principle” for working prisons, provided the slave-labour wage rates prisoners will earning don’t have a negative impact on private sector workers more generally.

I usually expect more from the Greens in terms of their being the sensible, sane arm of our nation’s politics … so I was inordinately surprised that Clendon’s reported list of objections to the policy didn’t include some of the following:

New Zealand is unlucky enough to have a prison system already part-privatized. A nuclear weapons (and other awesome, humanitarian things) company called SERCO owns and operates facilities like Mt Eden. If you do a *teensy* bit of googling about this company and its record, then you’re left with the distinct impression it’s a bit of a dodgy operator.

Matters only get *worse* when you start to look at how they do prisoner labour over in the United States (which, let’s not forget, has a bit of a history with involuntary servitude that runs right back through Confederate cotton-fields and Framers’ plantations and on into indentured white labourers being shipped over en-masse in the 1600s).

Check how Alternet puts it: “Rarely can you find workers so pliable, easy to control, stripped of political rights, and subject to martial discipline at the first sign of recalcitrance — unless, that is, you traveled back to the nineteenth century when convict labor was commonplace nationwide”

Starting to see why private prison operators are licking their lips in anticipation about being gifted their own cut-rate slave-labour workforces?

Privatized prisons are most profitable when they’re at as close to maximum capacity as they can be. This way the prison operator is taking the most possible money from the state and taxpayer (variable revenue) to cover both the costs per prisoner (variable costs) and the fixed costs associated with running the prison. There’s therefore straight from the get-go a perverse incentive for prison operators
to frustrate attempts at parole, rehabilitation, or anything else which dents their prison population, and the concordant profitability of said operation. Ways in which this may manifest run all the way from the culture perpetuated by prison staff within the institution itself on up to lobbying the government for more punitive and incarceration-oriented sentencing legislation.

You know, like the Three Strikes You’re Out (And Some Prison Operator’s Latest “Investment”) law which we got thanks to ACT last time around.

Turning our prisons – and particularly those which are already privatized – into workhouses (particularly when some prisoners *already* have the ability to work, and especially as part of rehabilitation efforts) just adds yet another layer of perverse disincentive for the state – or the private operators it’s kicking for touch by handing responsibility on to – to actually do something about our spiraling prison population.

All National has in fact done by announcing its intent bring us “working prisons” … is they’ve managed to evolve SERCO’s view of its charges from “thing that gets put in hole for a few months or years and passively generates us a return” to “thing we can drag out of the hole and extract an actively generated return through mandatory labour”.

Privatized prisons are prisons run at a profit. Activities which generate profit are the ones which private sector operators will engage in more of. Holding as many prisoners as possible generates as much profit as possible. Making all those prisoners work for slave-wages while you pocket the revenues both from keeping them AND what they produce … is even MORE profitable.

Letting those prisoners out on parole, or otherwise facing a declining prisoner population is *not* profitable. In fact, it actively hurts profit margins. A humane and successful rehabilitation program, therefore, would be /incredibly/ bad for business, as it would hugely reduce the recidivist inmate-pool whom SERCO’s New Zealand arm is directly building its fortunes upon.

This is why I don’t trust any but the state – and even then, not them all that much – with the ability to incarcerate and take away the rights of its citizenry. Because at least the state doesn’t have profit margins (although it can be argued that the vote-seeking proclivities of politicans can, if anything, be worse).

The trouble is, even when you divorce the apparatii designed for arbitrating criminal cases and allocating custodial sentences from the organ charged with meting out them custodial sentences … while on paper this makes it somewhat more difficult for private operators to demand “profitability-at-sentencing”, you still wind up the people who have actual authority over prisoners day-to-day – and who can therefore make the greatest possible contribution or otherwise to prisoner rehabilitation (or, if they prefer, dehumanization) – drawing a profit from their ongoing incarceration.

And then we make it even MORE profitable to own and run a prison by letting the custodians extract productive labour out of said prisoners.