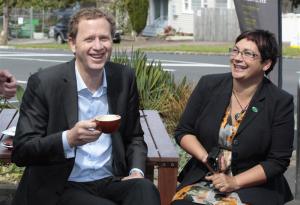 In the last couple of elections the Greens have stood Rev Mua Strickson-Pua as their candidate in Mangere. A well known personality in the Pacific community, often seen by many as a little eccentric. I’ve enjoyed seeing Rev Strickson-Pua make his case for the the party vote at the various Pacific and education functions I’ve attended. He’s a passionate individual, faithful and steadfast to the Green philosophy and message. In a number of previous posts, I’ve commented on the increasing numbers of Pasifika young people who have warmed to their ideas and considered a party vote in their favour.

It was to my shock then, that when the Greens released their Party list, I saw no Pasifika names – or at least Pasifika names who had a real chance of being elected. The messages that many of our young people are warming to are in line with better stewardship of the environment, a focus on children and eradicating child poverty, better health and educational outcomes for those on the margins. For many of our young people, the Greens offer a particular vernacular that NZ-born Pacific youth can seriously relate to and understand. But in order to cement their message, the Greens are going to need people who have Pacific heritage.

Labour have for many years been the Party that encapsulates the aspirations of Pasifika people. There are a number of Pasifika list and electorate candidates who are well known to local communities which bodes well for the Party. A number of those candidates should make Parliament because they’re in safe Labour seats including Faafoi (Mana), Sio (Mangere), Williams (Christchurch East), Salesa (Manukau East) and Sepuloni (Kelston). Jerome Mika in Papakura will undoubtedly pick up quite a bit of protest vote against Judith Collins. He’s a strong local voice and has been active in the union movement for many years. Someone to definitely watch for in the future is Upper Harbour candidate Lemalu Herman Retzlaf who is an excellent orator and practising lawyer.

Next Sunday, the Greens may well be in discussion with Labour about how to form a strong, stable and visionary coalition government. Both Partys are agreed on a number of key platforms and should be able to form a cohesive working relationship. I also expect that both Partys will have the support and strength of Harawira, Harre, Sykes and Minto to draw from too. Further, on current polling I expect that Marama Davidson will become a new Green MP next week. She is well known in the south and amongst Pasiifka communities and can perhaps begin the much needed dialogue with Pacific communities alongside Jan Logie.

In the end, if the Greens and Labour are going to be a coalition thats truly representative of the ideals and values they espouse, then the Greens cant just rely on Labour to be the partner that brings Pacific people into the coalition tent. The Greens must seriously engage with Pasifika communities and prove that they’re committed to those communities by nurturing Pacific candidates to then put on their list.