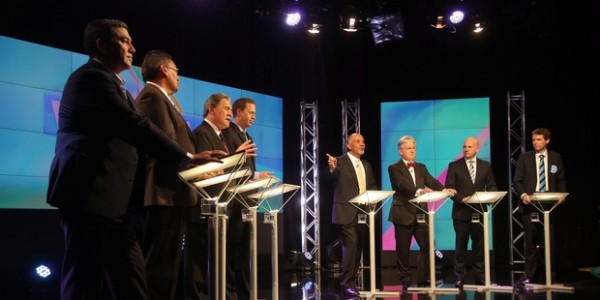 I’m kind of frustrated once again with New Zealand’s ‘Too Many Dicks on the Dance floor’* approach to politics.

When I say ‘dicks’ I’m referring to penises, I’m not trying to insult the leaders as people, and I don’t personally blame them insomuch as I feel they have a responsibility as humans to fight for greater fairness. The government won’t implement a female quota – unlike many other developed countries – with only some parties prepared to implement a voluntary quota.  A global average of women in parliament is roughly 20% – roughly 30% in our country, so we aren’t doing so great. I mean, women make up 50% of the population; this isn’t just a minority gripe.

I was disappointed to see this photo. I do wonder what organisers are thinking when they produce national-level content like this. Who thought it would be a good idea? “I know, let’s get ALL the mans to debate! Mediated by, you got it, another man!” Genius. No wonder women’s issues are barely being mentioned this election despite a huge level of public interest.  I simply do not get how this is considered normal or acceptable.

With this and the vile, casual normalised misogyny of attack-dogs Slater and Williams last week it’s all getting a bit much. I’d like us to stop pretending misogyny isn’t going on almost everywhere and playing a fundamental role in politics and every-day life. I know a few at this stage will moan “But Crusher Collins and Paula B are examples of awful women in politics!” and they’d be right, but they are an example of a minority few in what is still a male-dominated environment. I’m not saying women can’t be awful or have politics different to mine, I just think it’s important we have a better chance for square representation. The promise of democracy is greater equality, but it fails to supply us with equity – fairness.
Trolls are going to say that women should take “responsibility for themselves” and vote in more women (because women are so notoriously irresponsible, right?), but that’s hard when we don’t have the option of women to vote for, or when social pressures force women into secondary roles because men want to be leaders and see each other as leaders. Literally there is no reason for such a male-dominated political environment to exist beyond the impact of problematic values. Propose another? It’s not child bearing, there are plenty of skilled female or gender-queer leaders who don’t have children (or who have childcare worked out) who could easily participate, yet this situation abides.
When dirty politics and social pressure determine the distribution of power, there is no way you can argue with people in power who fundamentally view women as useful for sex and service and not essentially powerful or useful. There is no way you can argue with misogynists who don’t like it when women are more powerful than them. These are those who say “We believe in equality!” but have a policy of equity-blindness; they refuse to recognise that unfairness, prejudice and social pressures work against genuine equality for huge sections of society. Democracy has a good go at reducing inequity, but it hasn’t worked. I prefer we stop pretending that democracy is a sufficient fix all and just get on with the task of making things fairer.

I do not think 100 years of male political domination is an appropriate situation and it needs to be addressed and the right just isn’t addressing it, they’re knowingly perpetuating it. Preventing male domination is not the same as a “man ban” it’s just that, a ban on domination by a certain demographic. Equality (same rules for everyone) does not equal equity (fair playing field for people). Because, as we have seen in the last few weeks, we live in an environment that rewards unfair, hateful, bullying behaviour and so we need to counter that. I am more than happy to agree there are males who are unfairly marginalised in society and I’d like equity for them too, but as a woman I’m equipped to speak about women’s issues, not theirs. I can support them. However they are misled if they feel that to argue for the legitimacy of their cause they have to deny that women have a reasonable claim to discuss the issues that impact upon our group.I love heaps of guys, plenty have got my heart and my gripe isn’t with individual guys, I just think men-the-group, have too much power, power they haven’t earned and don’t deserve just because ‘penis’, or because the bible says men should be the ones who make the decisions, and that for a great deal of time our political system was based upon that outdated Christian idea. Not bashing Christians here; bashing that ideology.

I tell you what, we are powerful and we are leaders and if we need to be vociferously aggressive to get you to make some space for us then so be it. But you know it would be nice if a simple, reasonable argument would do it, and that those guys who want to hold onto their power would just say “fair enough”.

So I agree with Flight of the Concords – it’s time you guys “spread the dicks out a bit and create some lady-space”, “It’s easy to fix!”. I’m looking at you, Colin, Jamie, John, also at lots of the union/socialist groups in Auckland here too; Auckland Uni Debating Club? This isn’t just a right-wing problem. Addressing this unfair situation definitely falls to a good number of guys in power. Though shoutout to all of the left-wing parties and New Zealand first who have made concerted, thoughtful efforts to remedy the disparity whilst we wait for the right to sort out their inequity-blindness. My advice? If you’re in a position of power before you do anything public please think: If we want equality, how will we make this situation more equitable? Not just for women, but for others too, I’m not ignoring class or racial inequity here; I’m not saying this issue of gender is the only important issue. I point at the issue of gender, without denying the impact of class and race issues.

Here is a handy guide for organisers all over. Ask yourself:

I’m not sayin’ every single thing needs to be perfect and everyone needs to be represented down to the level of individual, just a good go at race, class and gender (including marginalised genders), and sexuality will do the trick. Those are big groups in society; reasonable considerations to make.

*I hear that the song is a kinda sexist and I’m being crass but you get my point, right?