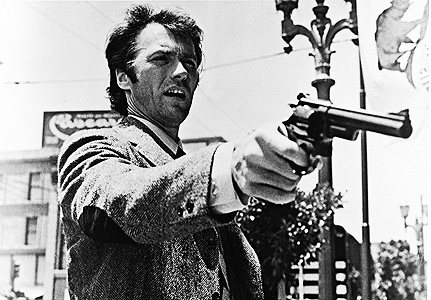 Do you feel lucky punk?

Consider this. A few hundred metres away, right in front of you, there’s a man with a very big gun — a .44 Magnum, the most powerful handgun in the world. You’re looking down the barrel. He’s just pulled the trigger, and a bullet is speeding towards you. You would very much like to dodge the bullet, but your fate depends on the actions of the political parties standing for election on September the 20th.

The Conservative Party denies the bullet exists, and will smack you if you move.

ACT says that if the bullet exists (and it’s not really sure it’s there) then the best thing to do is not very much at all because a little flesh wound never killed anyone.

The National Party says that we should wait and see what the rest of the world does before taking any bullet seriously, and in the meantime hands out stacks of money to its friends in the bullet-making business asking them to make lighter bullets.

The Labour Party says that yes, a bullet is definitely on the way, and you need to move, but first lets see if we can deflect it from its trajectory by grabbing back some of the money the National Party has been giving away.

The Maori Party wants to plant trees between you and the gunman.

The Green Party wants you to take cover while it blows very, very hard at the bullet in the hope that its trajectory can be changed.

Internet/Mana agrees, but wants to do it digitally.

NZ First wants to do something, but isn’t sure what until it’s decided who is going to be the next prime minister.

The bullet is dangerous and damaging climate change and it is certainly heading our way. Climate policy really should be a major issue in this election, but – despite the valiant efforts of the Climate Voter initiative (up to 59,000 sign ups when I last checked) – it is failing to attract much mainstream attention. As far as media coverage is concerned, there’s more interest in a mythical tax cut unicorn which might turn up in a few years (or not). There’s precious little sign of serious thought being given to the issue that is going to define the lives of everyone on the planet over the rest of this century.

If you are a “climate voter”, the best way to inform yourself about party policies on climate is to have a look at the Great Climate Voter Debate, organised by the Climate Voter coalition last week. It’s two hours of on-topic discussion, and exactly the sort of balanced coverage we should be seeing on TV and in the press.

At the moment it looks like a fairly clear climate divide has opened up between the parties of the right and the left. A future National-Led government is unlikely to do anything to tighten up NZ’s emissions trading scheme, or take any serious steps to adapt to future inevitable change, nor will any of its likely coalition partners force its hand. A Labour-led government will be much more proactive, thanks to the presence of the Greens at the cabinet table. If the balance of power is held by NZ First, the next three years of climate policy will be decided by Winston Peters and the baubles of power.

You got to ask yourself one question. Do I feel lucky? Well, do ya, punk?