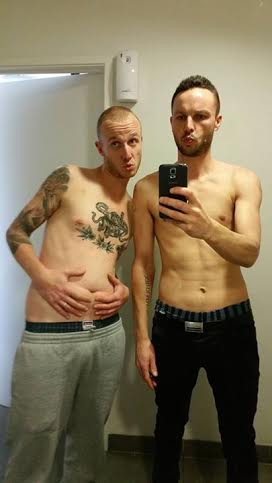 This is making me feel pretty uncomfortable.

Here we have an instance of Jono and Ben posing like “exposed celebrities”. But do you know what I’m seeing? I’m seeing two dudes who basically “roasted” a woman online (exposed pictures of her without her consent) just like the Roastbusters did, who are then making fun of the situation, just like the Roastbusters did. I know they are not condoning rape. They are, however, knowingly condoning this kind of without-consent behaviour toward women, specifically, posting photos of women online without permission.

The Rock, like many other Radio Network and Media Works radio stations yesterday posted illegally stolen and explicit photographs of Jennifer Lawrence and other celebrities. They did so with full knowledge that lawsuits were under way, they did so knowing that Jennifer granted NO CONSENT. The original photos were very obviously private and completely inappropriate for public distribution. They were stolen, and it is not her fault they were stolen, she had reasonable expectations of privacy.

People here we have it. If you ever thought rape culture wasn’t a thing it’s right here, in action. Is doing stuff to chicks without consent funny? Are women “asking for it” if they take photos of themselves naked with their partners and store that on private, password-protected spaces? No. People are actually using that phrase “asking for it” including the radio DJs. Do you realise how that sounds? Can we stop it? A woman taking private photos of herself, for her partner, is not asking for global humiliation. She is not “asking” for anything.

Remember, these organisations have been contacted by the public, some of them removed photos, some tried to post “tamer” photos or link to hosts elsewhere, some continued to laugh about posting the images because ratings are money and money is cool. It would be nice, if we did something, to stop men who have no concept of consent controlling New Zealand news media. It is 2014. The time to act is now, let’s do something. Your action matters.

The Rock are still publishing the images on their website and updating links. Let them know what you think. School them on consent and that acting without consent isn’t actually a laugh: bking@mediaworks.co.nz, jase@therock.net.nz. You can also do so on their Facebook page:

Jono and Ben:
The Rock:
You can email Jennifer’s representative and report anyone who has distributed the images here: info@id-pr.com attention Liz Mahoney.