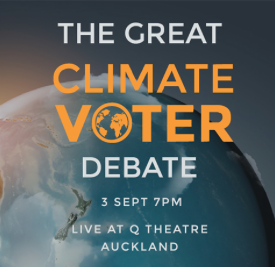 The Mana Movement like the Maori Party it sprang from, came out the environmental struggle. The dispute over the Seabed and Foreshore which gave rise to the Maori Party was a fight by the government on behalf of big business to be able to freely hand the resources of our coasts and seas to big multinationals to exploit, unconstrained by consideration of treaty rights and Kaitiaki granted Maori under the Treaty of Waitangi.

In this election the fight against the injustice and cruelty of poverty, (particularly child poverty), in a land of plenty is Mana’s focus, but the fight to protect Papa Tuanuku runs a close second.

Climate change will hit our constituency, the poor, the dispossessed, the indigenous people, those close to the land, the hardest. The wealthy, the powerful, the privileged, will be insulated from the worst effects (at least for a while).

The global struggle against climate change is anti-apartheid, anti-nuclear, anti-poverty, all rolled into one.

If climate change is left unconstrained it is estimated that the death toll will be measured in the tens, if not the hundreds of millions of human lives, mostly in the Third World and tropical regions of the planet, not in the First World where the problem was created.

Climate change will cause war as nations fight to protect diminishing resources in a world devastated by climate change.

The global effects of climate change are estimated to be as great or even greater than the effects of global thermo-nuclear war.

This is why the fight against climate change is not unlike the anti-nuclear struggle.

The fight against climate change has become urgent and will have to be fought on every front: Protest, Parliament, Courts.

In the age of climate change, activists need to become politicians. Politicians need to become activists. This is why leading political activists like John Minto and others have joined the Mana Movement. We sincerely believe that the Mana Movement with the aid of our strategic partner, the Internet Party, is the best activist and political organisation, not only in the fight for social justice, but in the fight to defend Papatuanuku.

The Climate Voter debate on Wednesday night Sept 6 at the Q-Theatre Queen Street.

Pat O’Dea is the Mana spokesperson for climate change issues. He is also the Mana candidate running in Epsom. Pat O’Dea is standing for Mana in Epsom with the express purpose of ejecting the right wing racist climate change denying ACT Party from parliament. He is number 13 on the Internet/Mana list.