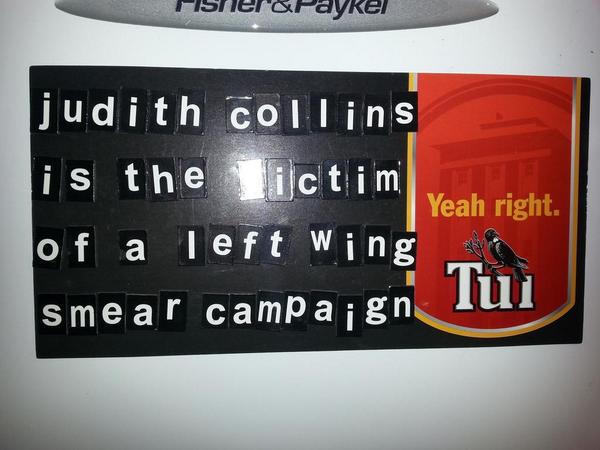 And now we get down to the final few moves before checkmate. If the following investigation is right, how could Slater and Collins have known what was in the Secret Intelligence Service Official Information Act request that hadn’t been released yet?

Former Cabinet minister Judith Collins faces being pulled into the high-level inquiry into intelligence information being sent to blogger Cameron Slater after new information from the hacker known as Rawshark.

The Herald now has information purporting to be social media conversations and emails between Ms Collins and the blogger Cameron Slater.

Among the information, which was said to be hacked from Slater’s computer, is an apparent discussion about the political demise of former Labour leader Phil Goff.

The conversation appears to show Slater and Collins discussing Mr Goff’s departure from Parliament in the context of an expected Official Information Act response just days before the unusually swift release of an intelligence briefing to the blogger from the SIS.

The Official Information Act release, made just days after it was requested, showed SIS director Dr Warren Tucker had briefed Mr Goff on Israeli backpackers the SIS had initially suspected were spies – information the Labour politican had claimed not to have been told.

Nicky Hager’s Dirty Politics book raised questions as to whether Slater was tipped off about what to ask for and when the information would be coming as part of a politically motivated attack.

The Herald is currently analysing the new information but has matched the dates of an apparent conversation between Ms Collins and Slater with the days leading up to the release of the SIS information.

In discussing Labour’s prospects for the 2011 election, Ms Collins is said to have sent a message to Slater on July 31 2011 at 8.27am saying: “Can’t imagine that they can find someone to take the fall for Phil. When Phil fails, will he then resign from Parliament so we can have a by-election so soon after the election? perhaps he should just go now and then we can save money on a by-election?”

Slater is shown responding: “Well hopefully I will get my reply to my OIA on monday. then we will see what happens.”

The conversation – if accurate – shows the blogger discussing the expected release of intelligence information with Ms Collins, a Cabinet minister, before the SIS had released it.

The blogger had made the request for the SIS information on July 26. On August 2, he is said to have sent a message to a friend saying: “OIA’d the briefing minutes and notes for Goff’s SIS briefing… it has been expedited, in the public interest. It is devastating for Goff I am told.” The information arrived on August 4.

…explaining how they seemed to know what was happening before it happened doesn’t help their claims that this is a left wing conspiracy. The more you look at it, it looks more like a right wing conspiracy.

Using the state spy agency to embarrass a political opponent by releasing information to someone who has all the ethical boundaries of a brain hungry zombie in a kindergarden demands more than a shurg and a smirk from our Prime Minister.

Key must appear at the inquiry and it must be open to the public and he must be under oath.

This Government is rapidly running out of wriggle room.