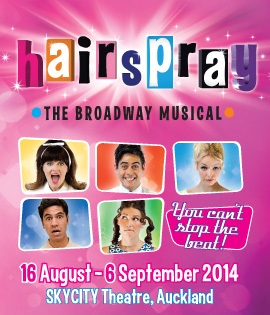 Somehow I managed to miss the movie when it came out, I had no idea really what it was about though I felt it had a vague relation to High School Musical. In retrospect, that is was  probably mostly because of Zac Efron’s presence in both. Though they are equally poppy, toe-tappy upbeat musicals appealing to similar markets. That said, Hairspray has significantly more kick and deals with much meatier themes.

The African American kids can’t dance on the t.v. show that the white kids can, there’s a whole lot of fat-shaming and body image stuff going on. It’s a very cool coming of age story with a strong female protagonist who defies peoples expectations and obsession with image to fight for what’s right.

The cast of this version is great, with particular mention having to be made of Lavina Williams (The Lion King, Australian Idol) who plays Motormouth Maybelle and has a huge voice and presence.

The costumes are fun, the set is pretty. It’s all sparkles and pastels. Completely, fabulously over-the top.

You can’t leave this show after the standing-ovation worthy finale of ‘You Can’t Stop the Beat’ without a smile on your face.

There’s a week left- I’d highly recommend you make this a priority for your teens.