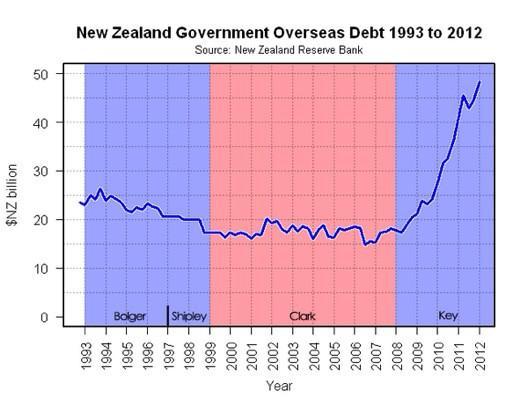 In focus group meetings, the sleepy hobbits of NZ by a staggering amount all believe that National are better economic stewards of the country than Labour, that’s why, instead of answering questions about blackmailing MPs, trawling brothels for dirt on political enemies, hacking Labour’s computer, rigging candidate selections and crucifying public servants, all you will hear from National is lots of economic jargon to cash in on that public misperception.

Despite borrowing billions for tax cuts, despite selling off our assets, despite only propping up Dairy and Casinos with crony capitalism and despite only relying on the Christchurch rebuild for economic activity, the sleepy Hobbits of NZ think Key’s vacant optimism is steering the good ship NZ towards better economic times.

The truth however is far less glowing.  Firstly their new housing package will actually drive up prices…

The problem is not primarily one of supply. People are housed. The problem is that so many are trapped in rented houses because it has become so much harder to buy one.

The rate of home ownership in New Zealand has declined because so many established home owners have bought two, three, four or 10 houses. They are remortgaging their home to buy rental property, not so much for the rent but for the capital gain when they sell. Rent in Auckland has not been rising at a rate that would be occurring if there really was a housing shortage.

The central problem is not supply, it is the demand for investment property. But National is tackling only the supply side with its efforts to have councils zone more land for housing, and the increased first home subsidy it announced at its campaign launch. These steps will do nothing to limit our appetite for investment property and may simply feed it.

…secondly inequality is far worse than most appreciate…

Economic inequality is one of the election themes, with Labour and the Greens promising to lift the minimum wage and tax the top 2-3 per cent more in a bid to build a more equal society (see sidebar).

Skilling’s research indicates that debate is taking place against widespread voter ignorance about just how unequal our society has become.

The richest 20% of us in NZ own 70% of the wealth, with 18% in the hands of the second richest quintile, and 10% in the hands of the middle quintile. Just 2 per cent was owned by people in the fourth quintile, while the bottom 20% of NZ owns nothing! Yet the mainstream media decided Pam Corkery swearing at them was more newsworthy than free education, full employment and feeding hungry children.

THIS is why we need a public broadcaster!

and thirdly, the lack of an actual economic plan beyond rebuilding from earthquakes means the economy is in deep trouble…

New Zealand’s booming economy is at risk of a hard landing once temporary factors ramping up growth wear off, economists say.

Our economy is the envy of the world with an annual GDP growth rate of 3.3 per cent and unemployment of 5.6 per cent, both near the top in the OECD.

But the current rate of growth is unsustainable, a panel of some of New Zealand’s top economists told a briefing in Auckland today.

And they said many New Zealanders are not aware how much our economy is relying on one-off boosts like the Christchurch rebuild, or how quickly it could slow down when they come to an end.

…most NZers will be horrified with the reality of that graph because the spin for the last 6 years has been National are wonderful with the economy and Labour incompetent. The sooner Labour start to focus on this illusion of Key as the great economic master, the better.