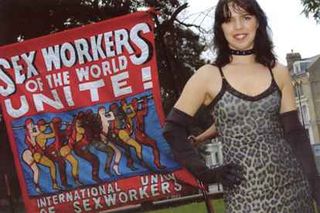 When Dirty Politics started to reference an ex-prostitute I began to get antsy. My first response was “come on Nicky, we decriminalised in 2003. Its sex worker.” My second response was “Ah oh. Who was it and what did they reveal? ”

There is and always has been an un-written code. The whores code of silence. The business relies on it. In an industry as discriminated against as the sex industry a mutual dependance on discretion is crucial. The clients are hardly going to point you out at the pub without implicating themselves.You can see how that works to everyone’s advantage.

As a person who has a long and public association with the sex industry my response to seeing someone implicated in feeding info to Whale Oil was visceral. Literally gut wrenching. Immediately I wanted to stand up and shout “It’s just one bad apple!”

The name of the ex-sex worker was disclosed last week in the NZ Herald. I wasn’t surprised. Disappointed but not surprised. I first had contact with her…but wait. That would be indiscrete. As it happens, it appears from what was printed that there was a lot of talk with little result. At one point she recommended that someone go to Mustangs and sit at the bar trying to illicit information. I know both owner and management at Mustangs. I used to work there. I am not surprised she had no ‘ in.’

We achieved Law Reform without outing anyone. When MPs talked trash, called us names and ran us down we said nothing. When opposition stigmatised us, patronised us and denigrated all women who ever participated in the sex industry we never once retaliated by dropping to the lowest common denominator and start slinging mud. The whores of NZ ( and I use the word whore in the spirit of reclamation ) never engaged in Dirty Politics.

So here I am. Jumping up and down and shouting. This is not “us” this is not how we behave I am distancing myself from this kind of abhorrent behaviour.

TDB Recommends NewzEngine.com
I want better. While I may be an out and out Lefty, I’m not so parochial as to think that no one on the right has any virtue. The problem is if we want to stop this behaviour I want to see someone stand up and shout “It’s just a few bad apples!” I don’t want us to beat them at their game, with their dirty tricks. I want to see a change the game. Actually I want people to stop referring to it as game full stop. Dirty politics is not just a book, it is a behaviour, it is PR, spin and bullshit. It is not a game.