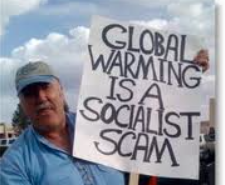 Has climate denial in New Zealand been bought and paid for by corporate interests? We already know that the ACT Party’s routine denial is closely linked to the financial support the party receives from wealthy free market fundamentalist Alan Gibbs, but revelations of potential PR “hits” by Cameron Slater’s right wing attack blog against youth climate activists Generation Zero suggest that corporate lobbying has stooped to new lows.

In the Sunday Star Times this weekend, Matt Nippert dug into some of the Dirty Politics emails obtained by hacker Rawshark that did not see the light of day in Nicky Hager’s book. One exchange in January of this year has Katherine Rich — the former National front bench spokesperson, now chief executive of the Food and Grocery Council and a key figure in directing Slater and PR man Carrick Graham to conduct smear campaigns against commercial targets — commenting on Generation Zero and its views:

“Reading their bios and twitter feeds. Some of their views extremely nutty. Eg NZ should reduce emissions to 40% below 1990 levels. I don’t know how we’d do that without shutting factories and culling stock.”

Rich’s views on emissions targets and their consequences are laughably ill-informed, but then she seems to get her climate info from Slater, and that’s not a good thing.

In the email exchange Slater tags Generation Zero with one of his favourite smears: they’re “green taliban in sheeps clothing”, and Graham notes that:

Slater and Graham’s target list, detailed in Dirty Politics, consists of people and organisations to be attacked on behalf of paying clients. Hager notes that Slater was being paid $6,500 every month by Graham for his blog services. Slater routinely republished material written by Graham unaltered and under his own name. Graham would then turn up in the comments to add even more bile to the invective.

Slater and Graham’s enthusiasm for attacks on Generation Zero seems to have petered out soon after the email exchange, and a search of Whale Oil shows little more than occasional invective against the organisation in comments there. But Slater has a long history of posting aggressive attacks on our understanding of climate science and policy, stretching back over many years.

In the past, I have been tempted to write off Slater’s denial as just par for the course for an extreme right wing blogger, but the revelation that he has been paid by commercial interests to conduct smear campaigns, and of his close ties to John Key, Jason Ede, Judith Collins and other senior members of government, prompts a serious question.

Was Slater’s climate denial encouraged by Collins, Ede, and Key? Given that there is a rump of National members of parliament openly sceptical of the need for urgent action to reduce emissions — deputy PM Bill English and Gerry Brownlee among them — was Slater helping his mates by providing cover for their policy inactivity?

All his smoke and fury (which, of course, signifies nothing) could have been designed to make Key and Groser look moderate: not accepting outright denial, but not going along with those noisy people who want steep emissions cuts. Slater helped to create the illusion of false balance, by moving the Overton Window away from reality and into lala land.

Dirty Politics shows us a political and media nexus that has spun badly out of control, and a government that has been complicit in smears and law-breaking in order to tighten its grip on power. Government attitudes to climate policy are only one part of an issue that could properly be described as a constitutional crisis. But if the National Party does manage to ride the storm and cling to power we know what expect for the next three years. More climate inaction, more emissions trading profiteering by big corporates, and the mortgaging of all our futures against John Key’s ego.