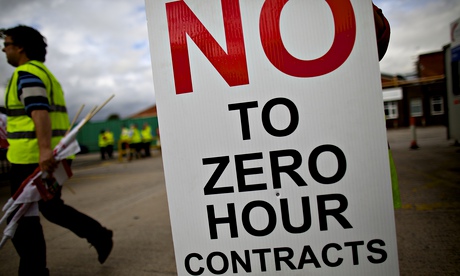 All around the world attention is being drawn to what have been dubbed in the UK “zero-hour contracts”. These are contracts that don’t have any guaranteed hours even though the worker may be regularly employed.

Unite Union has been struggling with exactly this problem since we started organising in sectors that had lost union protection during the 1990s.

What we discovered was that large sectors of the working class in this country had no guaranteed hours of work. This applied to fast food restaurants, security, cinemas, call centres and hotels. This doesn’t just apply to completely casualised sectors. The SkyCity Casino in Auckland is a 24-7 business with over 3000 staff. It knows pretty exactly how many customers it will have on any particular day of the week. It has every ability to have most workers on full-time contracts. Instead it keeps two out of three workers on part time contracts with only 8 hours of work guaranteed each week.

Having managers in control of how many hours of work you get each week creates enormous risks that this power will be abused. In the fast food sector many of the managers are also young and inexperienced in controlling people. Too often we see them choosing favourites rather than rostering objectively. Too often we see the roster being used to punish staff for minor infractions like lateness when a proper process should have been followed. Too often we have seen workers who have joined the union being discriminated against in the hours they are given.

“Insecure Work” became the topic of a major study by the NZ Council of Trade Unions. CTU President Helen Kelly commented: “Our report shows that at least 30% of New Zealand’s workers – over 635,000 people including 192,000 temporary workers – are in insecure work. We believe it may well cover 50% of the workforce because we know that 95,000 workers have no usual work time, 61,000 workers have no written employment agreement, 573,000 workers earn less than the Living Wage and almost a quarter of a million Kiwi workers say they have experienced discrimination, harassment or bullying at work. Some of these will add to the 30% level.”

In the UK the Office of National Statistics now estimates that there are 1.4 million workers on zero-hour contracts. This is more than double their previous estimate. This caused something of a scandal in Britain and the government claims that they will do something to stop employers using these contracts from tying the employee exclusively to the one employer. At the same time the government mandated their welfare agencies to cancel unemployment benefits for three months for anyone refusing a zero-hour contract job.

In the US a remarkable series of articles in the New York Times recently shamed Starbucks into announcing they were changing their shift rostering system.

American Prospect ran an article headed “No Jobs But Crappy Jobs: The Next Big Political Issue?” arguing that “The mass frustration is surely there. What’s missing is a mainstream national leader who will make this cause a prime election issue.”

A huge growth sector in employment is for workers dubbed “Task Rabbits” after a tempemployment agency of that name. The problem with this sector’s work is that it is replacing secure jobs, not supplementing them.

The fight against insecure work has merged with a fast food campaign “For $15 an hour and a union” which has led to referendum victories in Seattle and other cities for increased minimum wages. The Seattle referendum also had clauses that in addition to a $15 minimum wage, required affected employers to provide paid sick leave, promote part-time workers to full time before hiring additional part-timers and retain employees for at least 90 days after an ownership change.

A government agency also recently ruled that McDonald’s could not hide behind its franchisee structure when denying responsibility for unfair labour practises. The general counsel of the National Labor Relations Board ruled in late July that McDonald’s qualifies as a joint employer of workers at its franchise restaurant locations. “This decision —if upheld—could hold the company responsible for employee conditions and ease the fast food industry’s path toward unionisation,” saysFortune magazine.

On April 1, 2015 all of the major collective agreements between Unite Union and the major fast food companies expire. This includes McDonald’s, Restaurant Brands (KFC, Pizza Hut, Starbucks, Carl’s Jr), Burger King, Forsgren Carl’s Jr and Wendy’s. It is our intention to run a major public campaign to end zero hour contracts in the industry as part of our renegotiation of these collective agreements.

We have made progress with all the companies to moderate managers’ behaviour in rostering. We have introduced clauses into the contracts to insist that regular shifts are offered to existing staff before new staff are hired. But these clauses have proved almost impossible to police effectively given the high turnover of staff and the still vulnerable position workers are in when raising grievances. We have very few clauses with guaranteed hours.

This means that staff who have worked for these companies for many years still have their rosters changing from week to week. We still have cases of workers going from 30-40 hours regularly to only one or two shifts a week when they run foul of the store manager.

We intend to serve notice on all these companies that this situation must end – and in 2015.

Several other large private sector unions are also looking at this issue with renewed interest following global discussion on the issue. First Union is looking at how they can strengthen clauses around hours in their retail contracts in particular. Discussions have already begun between Unite and First on how we can work together on this campaign.

If a Labour-led government is elected the task will be made radically easier. The promise to implement a $16 an hour minimum wage in two steps before our contracts expire in April will largely settle the wages part of our negotiations. While the margins above the minimum wage will no doubt be an area for argument, a 12% increase in the base rate is a great place to start negotiations from.

However, even if National is returned we are confident that there will be overwhelming public sympathy for getting secure hours written into all our contracts.