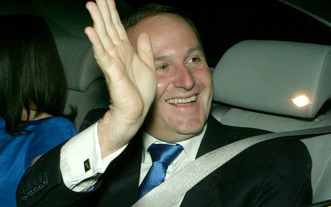 It was all set to go: Teamkey would be the cult of personality that would do Stalin, Mao, Reagan, Thatcher, or any of the Nth Korean Kim Dynasty, proud.  National and it’s “Teamkey” propaganda strategy   would cash-in Big Time on Key’s immense public popularity.

It was a popularity that seemed impervious to all the scandals, stuff-ups, and questionable economic and social policies enacted by this government over the years. Every time a minister stuffed up,  Key’s popularity remained unblemished.

People couldn’t work out how it was being achieved. Despite shitstorms surrounding so many National ministers – many of which resulted in sackings/resignations – Key walked through it, much like Superman might walk through an atomic bomb-blast, barely feeling a tickle.

But Key is no extra-terrestrial super-powered being (despite accusations to the contrary). His seeming talent for invulnerability wasn’t a preternatural super-power. It was wholly manufactured by mere mortals, working in back-rooms, funded by tax-payers, and played out with ruthless efficiency.

The plan, as outlined in Nicky Hager’s expose, “Dirty Politics“, and based on leaked emails, was that Key would be kept “above politics”. Others would do the dirty work, and he would maintain an “apolitical”, almost Presidential style. It was a form of fake neutrality.

“I don’t think it suits me as a person. I’m not a negative person and a lot of Opposition is negative.”

– he wasn’t talking about his own persona, he was reciting a pre-prepared script.

Nicky Hager’s book has stripped away the secrecy to this plan and Key’s closeness to the players in dirty politics has been exposed to public scrutiny.

Russell Norman once pointed out that there is a great deal of similarity between John Key and Robert Muldoon. Russell was half-way correct. Key’s politics was every bit as destructive as Muldoons, attacking, destabilising, and under-mining critics of the government.

The only difference is that Muldoon did his own dirty politics. He never hid behind others.

“Dirty Politics” has achieved more than simply revealing  unwholesome machinations between National party apparatchiks, ministers, and halfway-insane right-wing bloggers. The book has explained the nature of Key’s seemingly “Teflon” nature. The secret is revealed; the mystery is stripped away; and now, when Key is confronted by a media pack, the brown smelly stuff is sticking to him.

Result? Key is just another self-serving politician and his bloody-mindedness in continuing to shield Judith Collins is corroding his reputation and public standing. I am guessing this will be reflected in coming polls. It’s game over for this government.

If National loses this election, Key has already made it abundantly clear what his intentions will be;

Which then begs the question – who would replace Key?

Of the options available to National, I offer these insights;

Low points: his “debate” on TV3’s “The Nation“, with Labour’s Grant Robertson, where he continually shouted over his opponant and almost hijacked the show.  Or his veiled threats against protesting tertiary students in September 2011.

Comment: Joyce alienates people by shouting them down. It is bullying and as a political strategy makes him a liability. His pugnacity is more openly Muldoonesque than any other politician. Comment: Collins would be a gift for the Left if she were elected Leader of the National Party. She brings back memories of Jenny Shipley – and didn’t that end ‘well’? The Nats would be unelectable with her as Leader. (In simple terms, her political career is over.)

Low points: rorting the ministerial accomodation allowance (double dipping) in 2009. A silly thing to do for minimal gain. Mostly forgotten by the general public.

“I certainly wouldn’t condone an attack by a blogger on a public servant doing their job.”

If  English is positioning himself for a future leadership bid, it was a good move.

English was Leader of the National Party from 2001 to 2003, and was dumped after the Nat’s worst electoral result in decades. During that time, he’s kept his head down; focused on economic issues; and avoided public controversies.

He comes across as likeable, and the public might be persuaded to give him another shot as a Leader.

The political dramas will only be beginning on 20 September.

TV3:  The Nation – Debate: Grant Robertson and Steven Joyce on the wealth of the nation

NZ Herald: Bill English to pay back part of allowance