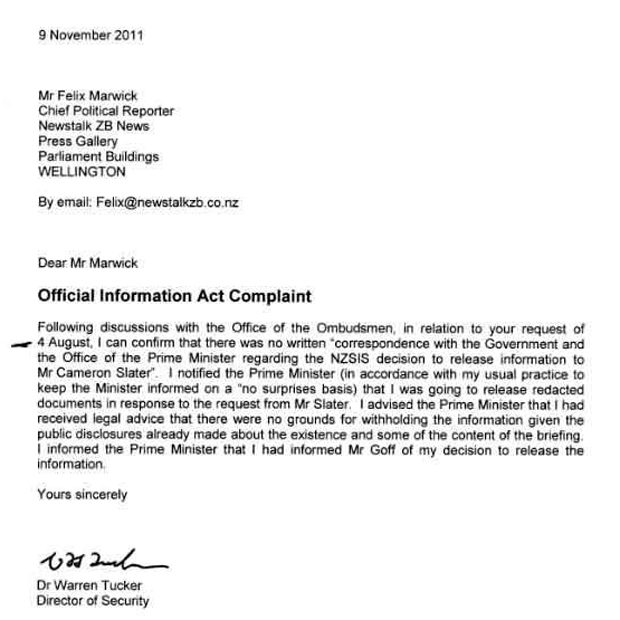 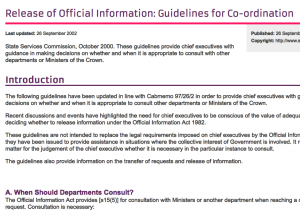 INFORMATION THAT I HAVE ACQUIRED, sourced from the State Services Commission, states in black and white the tight guideline requirements that must be followed whenever the SIS informs a Prime Minister of any pending release of sensitive intelligence information.

The official guidelines further cast doubt over the Prime Minister John Key’s version of events that the Prime Minister was not made aware that intelligence documents were being declassified and prepared for fast-track release to Cameron Slater.

Those guidelines show that it is virtually beyond belief that John Key, as the Minister in charge of the SIS, did not know highly sensitive information was being prepared for release, and to whom it was being released to.

As such, the Prime Minister’s insistence that he did not know, now looks difficult to believe.

The Government’s State Services Commission (SSC) is the authority that ensures a minister is informed of a pending or potential release.

The Official Information Act has not removed the duty on a public servant to keep the relevant Minister fully informed. It is important to consult with Ministers where release is likely to lead to public comment on a political issue. Consultation over an Official Information Act request gives a Minister an opportunity to comment on any political issues or matters relating to government management.
It would be appropriate for departments to consult their Minister when:

Beyond this, the Government’s guidelines are promulgated, or formally declared, by the Prime Minister’s office itself.

The State Services requirement stipulates: “Attention is drawn to the guidelines promulgated by the Prime Minister’s office on consultation between Ministers’ offices. Essentially these provide for the Private Secretaries and Press Secretary in each office to be responsible for the managed release of Official Information Act requests by Ministers’ offices.”

The Government guidelines do not allow a lackadaisical approach to the consultation process, but rather create a REQUIREMENT for all public servants of ministries, departments and intelligence agencies to be bound by.

While it is customary for politicians to refer to this consultation as a no-surprises “convention” as the Prime Minister recently said, this is a far too relaxed an interpretation of the reality.

The reality is that the director of the Security Intelligence Service was REQUIRED to consult and inform the Minister, who is John Key, on the release of the intelligence information. No surprises politeness, friendly observance to a convention, does not come into it.

It is known that some ministries, departments, agencies have tight protocols expanding to around 74 pages long.

There are consequences if a public servant does not follow those guidelines, and ministers are not left in the dark.

As the SSC guidelines state: “NOTE: Communication is the key factor which will assist in consultation.”

Consultation Between SIS and PM’s Office:

Consultation between the SIS and the Prime Minister’s office follows a strict protocol. It informs the chief of staff Wayne Eagleson, the chief press secretary, the press and political advisor (at the time Jason Ede), and the Minister himself, John Key.

For John Key to not be informed of this controversial sensitive intelligence information is beyond belief.

In checking out the practise of public servants observing the SSC guidelines the consensus is:

This is what public servants do. They build in consulting and no surprises in accordance with SSC guidelines. All departments develop and apply their own procedures for such consultation.

Minister’s offices frequently push back on information releases, but the department gets itself into trouble with the Ombudsman if it doesn’t apply the OIA correctly and fairly.

It is usual for those requesting information to become impatient, and for the proceed to take up to 20 working days minimum. And it is usual for the consultation period between the public service and a minister will take at least five days.

During this period, especially when information is sensitive, it is clear a robust exchange is in evidence between department, ministry, agency and minister.

Public servants say this period elevates the biggest risk in a delay.

It is therefore preposterous that a minister would not be informed about sensitive releases.

Furthermore, the consultation period empowers a minister or department to try and get on top of any damage that the release of information may cause.

Departments often proactively release the information and then referring requestors to the official website.

With regard to this specific release of intelligence information, it would be fair to conclude that a reasonably minded New Zealander would believe it likely that Whaleoil blogger Cameron Slater was used as a part of the Prime Minister’s office damage control strategy, designed to create a hit on the then leader of the opposition, Phil Goff. 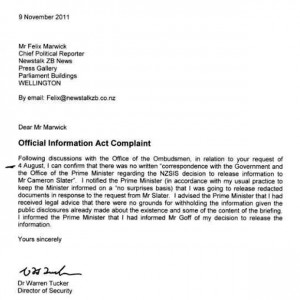 On the back of this, the New Zealand Herald this morning released an official letter from the then SIS director Dr Warren Tucker to Newstalk ZB journalist Felix Marwick, where Dr Tucker states: “I notified the Prime Minister… that I was going to release redacted documents in response to the request from Mr Slater.”

Dr Tucker goes on to state: “I informed the Prime Minister that I had informed Mr Goff of my decision to release the information.”

In a report by Nick Grant in the National Business Review this week (ref.)

I confirmed that I had received the same information as Cam Slater albeit a few days after he received it.

I had telephoned the SIS’s open phone line as a prelude to making an Official Information Act (OIA) request for both John Key’s and Phil Goff’s briefings.

As I told the NBR: “My interest was, if I got the PM’s briefing and I got the one presented to the leader of the opposition, I’d be able to compare the two and get a pretty good idea of whether they were the same or different – even if they were heavily redacted.”

“What I wanted was pretty specific … From that conversation I understood they were preparing information and that the request would probably be successful.”

I submitted my OIA request on 29 July 2011 and received a heavily redacted copy of Mr Goff’s briefing on 8 August 2011.

I remember at the time that was highly unusual. I had had dealings with the SIS previously and written extensively about the SIS and my experience suggested it would be customary, if lucky, to receive a response around 20 working days.

I received the reponse only one week later. I was Intrigued by a phrase in the covering letter from Dr Tucker that suggested I was well aware of Mr Slater’s parallel OIA request.

I later contacted Cameron about the issue. I put it to Cam: did he get a tip-off and if so who from. He denied having been tipped off.

What added to the mystery was that other journalists representing mainstream media were refused the information.

As I said to the NBR: “As I understand it, the Dominion Post put in one that was very closely worded [to mine] but didn’t get a response.”

I am left to consider whether my OIA request was in some way used to legitimise the security information drop to the Whaleoil site.

If there is a public interest element intensifying to this current state of affairs, it would suggest the Inspector General of Intelligence and Security give considered urgency to her inquiry into this matter and deliver her findings well ahead of the September 20 General Election.