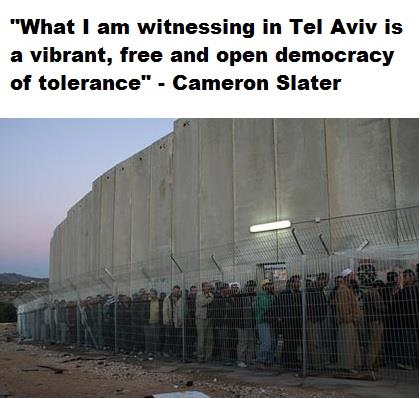 It is hard to know where to start with right-wing blogger Cameron Slater (Whale Oil), especially after the release of Nicky Hager’s book Dirty Politics. This confirmed everything many of us thought Slater to be: a snivelling pundit who serves those in power and has a vested interest in distorting the truth to serve his own agenda and those of his morally bankrupt mates like Judith Collins of the National Party.

As Hager’s book was released Slater had already boarded a plane to Israel, on a paid media trip. Yeah, you could not make this shit up. As New Zealanders begin to learn  the full extent of Slater’s corruptions, smear campaigns and how much he and his Whale Oil blog have influenced elections in the last six years, he is being paid, as I type this, to also pedal Israeli propaganda.

Slater tweeted this picture a few days ago: 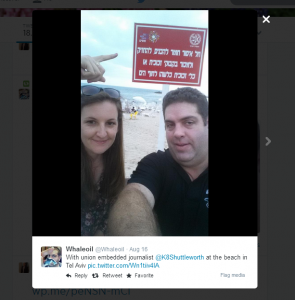 It must be nice to suntan on an Israeli beach and not have to worry about bombs raining down on you for simply existing – the Israel Government’s collective punishment of Palestinians in Gaza amount to a holocaust. Just over four weeks ago an Israeli naval ship bombed a beach in Gaza killing four children while they played, injuring others. It is impossible for me to forget the images of these tiny fragile bodies of Palestinian children whose lives were erased in the name of Israel’s security : 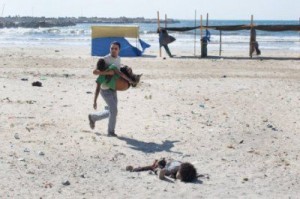 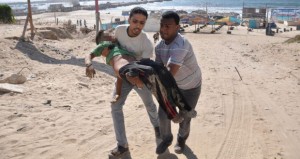 But please, Mr. Slater, sip your fucking-minted-fucking-lemonade and tell the world, “What I am witnessing in Tel Aviv is a vibrant, free and open democracy of tolerance,” as Slater reported to New Zealand’s Stuff on Sunday in the article ‘Blogging, money and burred lines’.

Unfortunately for Palestinians, this “free and open democracy” only extends the people of Israel. The body count for Israel’s latest bombardment in Gaza rests at over 1,900, while thousands have been injured in the name of this “free and open democracy”. I spoke to Julie Webb, an activist who is currently working in Gaza, who told me that an independent on the ground news source in Gaza, the Gaza Scoop, has had their headquarters bombed. They are increasingly desperate for foreign journalists to come to Gaza and bear witness to the atrocities that have been, and will continue to be, carried out by the Israeli forces.

Slater went on to say during his interview with stuff: “From the hotel I am staying at 100 metres across the road there’s a gay beach and the gay beach is 200 metres from the Orthodox Jewish beach – I bet you there’s not a gay beach in Gaza.”

I bet in Israel small children are not bombed to death on beaches while they attempt to engage in normal everyday activities – if you really want to play that game, Slater.

The Israeli propaganda machine is, of course, in full swing as it attempts to distort and cover the truth of the atrocities Israeli forces have committed against Palestinians in the last six weeks. All over the world tens of thousands of people marched and protested in opposition to Israel and in support of Palestine. They are some of the biggest protests for Palestine the world has ever seen; in London over 150,000 people marched for Palestine. People are waking up.

Israel is in full [media] damage control and it is clear Cameron Slater is happy to be complicit in creating static and pedaling propaganda on behalf of the Israeli government, as his Whale Oil blog is already a testament to.  Throughout Israel’s recent bombardment of Gaza many blog posts appeared on his site condemning Palestine – obviously Gazans deserve to be bombed and murdered because HAMAS!!!

Travis Poulson who writes for Whale Oil went so far as to call Palestinian children “devil spawn” in one blog and also said:

As a kiwi my eyes are really beginning to open up about the kind of people a lot of the Gaza Palestinians are. Not all, but as I type this I have just finished watching the news and am left with a sense of uncertainty, even impossibility as to the likelihood of any resolution. We have already seen the plight of the Palestinian, we get it rammed down our throat on every news channel or bulletin that we watch. The reasons behind it are not Israel or Israel’s actions. If the Palestinians as a whole believed in peace there would be no wall.

Slater’s blogs on his site are relentlessly aggressive.  Early this year Slater headlined a blog ‘”Feral dies in Greymouth, did world a favour” in relation to a West Coast car crash victim and has more recently engaged in sustained and ongoing attacks against sexual assault survivor Tania Billingsley and continues to deny the existence of rape culture. In the book Dirty Politics Hager reveals a conversation between Peter Smith and Cameron Slater which is a disturbing snap shot into his thinking:

When the devastating earthquake struck Christchurch on 22 Febuary 2011 … writing to his friend Peter Smith, he said, “That place is fucked … they should just board it up and close it down. Smith replied, ‘A real tragedy but it will fuck labour for the election.’ Slater said, ‘Yep blessings.’ Later his views hardened: ‘What I can’t believe … is how we have to bail out those useless pricks in the sth island, again.’ Smith  replied ‘I said to someone today that National should let then rot, after all they are useless scum Labour voters especially in the areas where the earthquake hit…” Slater added, “Those are suburbs are hard core Labour … the owners will be Nat voters though and the voters tenants, so the houses are gone and the scum are gone too, and so they should get nothing.

When this conversation was put on public display in the streets of Christchurch by the Campbell Live crew last Friday there was disgusted outcry from everyday New Zealanders – and rightly so it is a shameful example of the callous attacks Slater makes on people he has never met and will probably never know. But in contrast there has been so little outcry and condemnation of the Zionist and dehumanising language used in relation to Palestinians on the Whale Oil blog site.

Even while many in New Zealand are not understanding the links between Slater and the National Government courtesy of Dirty Politics at this point, one thing is clear to almost everyone: Slater is abhorrent.

If anything, his involvement in passing on Israeli propaganda could likely backfire, at least partially thanks to Dirty Politics. It’s certainly not ideal for the Israeli Government to be dealing with people of such … questionable repute. It doesn’t help their message when such morally bankrupt people are delivering it. Which is a wonderful piece of irony that we should all take a little pleasure in, even if it feels somewhat empty and bittersweet.