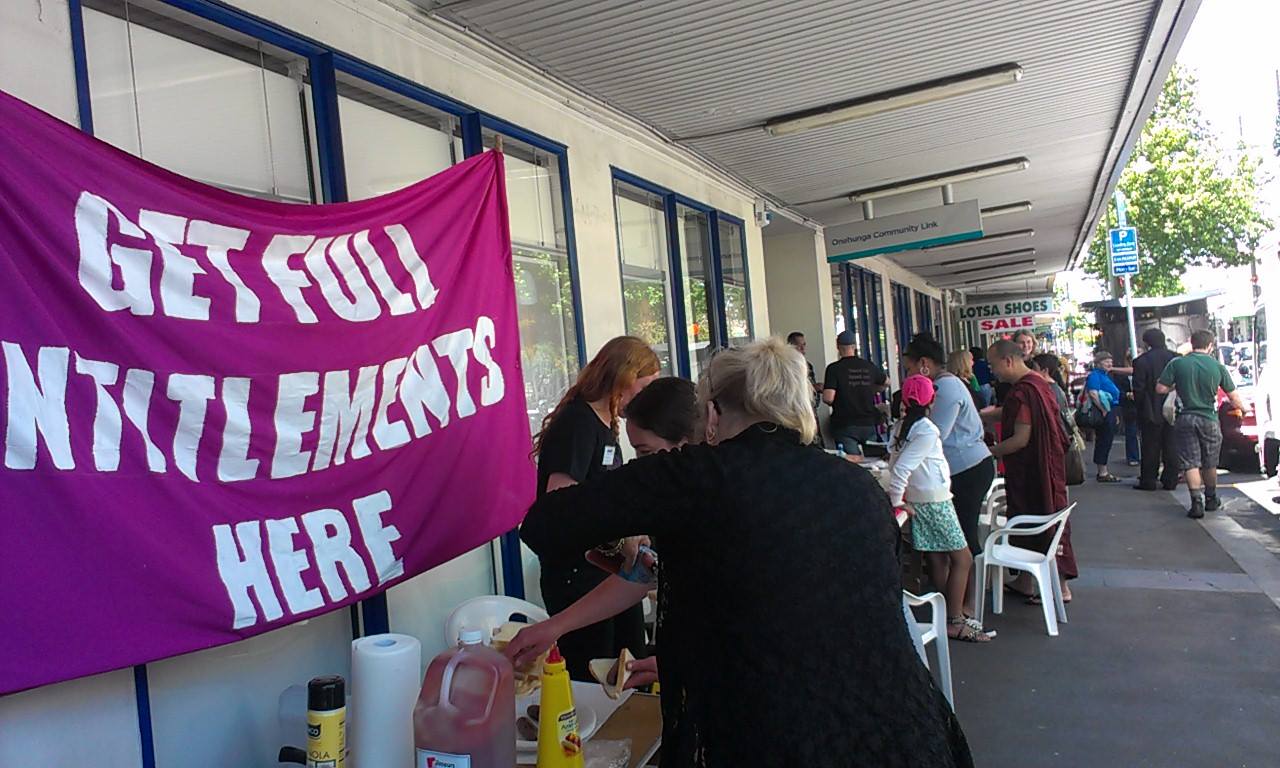 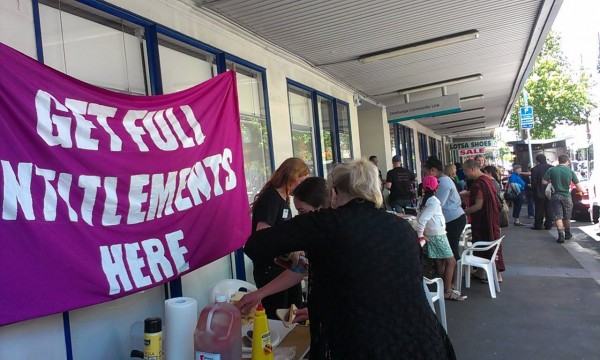 A woman had collapsed in the surging crowd in the lobby of Mangere Work and Income.  The mood was restless and hungry, faces were beet red , some people had been on their feet waiting for over four hours. Babies were crying and elderly leaned against walls for support. “This is the 3 days a year Work and Income are nice , that’s why we’re trampling on each other to get here,” a woman commented to me.

This was the second year I had volunteered for the annual Auckland Action Against Poverty (AAAP) ‘Impact’ – a three day event where a number of volunteers from all over New Zealand provide advocacy for beneficiaries at one Work and Income branch. This year was Mangere.

Of course, it wasn’t about Work and Income being ‘nice’ – it was that they knew for these days their “clients” would be made well aware of their entitlements. The Paula Bennett business-as-usual approach of wholesale declining of applications for assistance would not wash with the 40 or so AAAP advocates.

The first woman I advocated for was being made to look for work on the Jobseeker benefit. She had 4 children. She had left an abusive relationship and in doing so had lost all her familial support networks. It transpired that the only member of the family who could look after her children while she was at work, abused them. She had nowhere to put the children so had to give up her labour hire job. She cried tears of joy when we were able to argue for some money for clothes for the children, she had always taken clothes from the rubbish of others.

Another woman had got her clothes from one of those mobile clothes trucks. They gave her the clothes upfront , a few basic items , as she was in desperate need. In order to pay the $35 a week fee back to them she had to pawn basic furniture and borrow money from a loan shark.  She was so nervous because not only had she always been declined assistance from Work and Income before , but was made to feel embarrassed for asking – this was the common experience amongst the people we saw.

Another young woman was living in a two bedroom home with her 2 year old baby and 12 other people. She did not have a bed. There were no heaters in the house and people were cold. The other people in the home often got to the food before her and baby so they were hungry.

In Mangere. In Auckland. In our backyard.

These stories were not rare.

The extent of the poverty we came across should be a source of national disgrace and shame. We saw 500 beneficiaries over those three days and 500 more had to be turned away because we ran out of time. That’s 1000 desperate cases in one suburb. How many more are out there in just in that suburb let alone any other suburb in the country?

To the politicians who, in vying for our lefty vote, talk of child poverty – child poverty comes from adult poverty. Commit to the creation of secure jobs with decent wages. Commit to affordable housing and healthcare. Commit to repeal Paula Bennetts cruel, punitive and damaging welfare reforms immediately and lift the benefit rates so people can survive on them.

If beneficiaries received their correct entitlements in the first place, this advocacy wouldn’t be as necessary. However as it stands there is a dire need for more beneficiary advocacy and resources for the current groups so they can keep on carrying out this critical work. As the people of Aotearoa we need to organise alongside beneficiaries for the right to a dignified life for all – this is our struggle for a better society , one which doesn’t tolerate these levels of poverty and suffering.