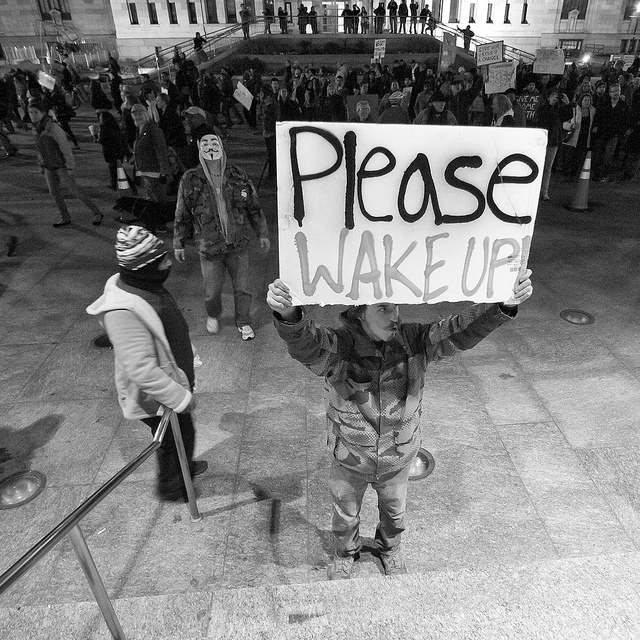 There has been major condemnation and controversy over Internet/Mana’s ‘Join the Revolution – Change the Government’ video in which Kim Dotcom is leading students in chanting “fuck John Key” at a concert put on by the Internet Party. Duncan Garner on Thursday condemned the chanting on his Radiolive show and Labour MP Chris Hipkins took to his twitter to express his outrage at the students and Kim Dotcom’s actions, “Getting a bunch of people drunk and getting them to chant abuse isn’t political leadership. It’s thuggery and megalomania intertwined” said Hipkins.

Meanwhile in Gaza and Iraq. Good to see Garner and Hipkins have their priorities in the right place.

Many New Zealand commentators and apparently MP’s are labouring under the idea that students are mindless morons who cannot think for themselves and where obviously just so overcome with ‘fame fever’ when Kim Dotcom took the stage they, without thinking, started screaming the words “fuck John Key” because if Kim does it, it must be cool? I hate to break it to Garner and Hipkins and the many other people who are condemning Kim and the students’ actions but the “fuck John Key” chanting started before Kim Dotcom even took the stage. As this raw footage proves.

Here is a NEWSFLAH for all those people who have been so mortally offended by the profanity spoken by students at a concert: the mantra “fuck John Key” has been around for a while now. Those words were said loudly and proudly at the student protests two years ago. I know because I was there.

The New Zealand media painted us as violent thugs and whingeing stupid students then too. In reality we were protesting John Key’s cuts to education. We protested privatisation, charter schools, league tables and performance pay. We felt axing allowances to post graduate students was not only a callous decision by National but also an attack on our right to higher education. Many students had to walk away from their chosen field of study and their career. At one of the first student rallies on July 21, 22 year old law student, Tessa Baker, said she would be $65,000 in debt after graduating from a five-and-a-half year degree with honours at the end of the year. “I am only able to study because my parents financially support me but I think education is so important it needs to be available to all, but it just isn’t,” Baker said.

Believe it or not, many young people in Aotearoa are fully aware of what John Key has done to this country from gutting the welfare state to selling off New Zealand’s assets – and thousands of young people care deeply about these issues. Internet/Mana is hearing our voices. This is why both these political parties are gaining such passionate responses from young people, responses that conservative right-wing parties like National could only dream of. Instead of passionate applause and fist pumping, National has been meet with their billboards being defaced and torn down. Awkward. What some people call ‘vandalism’ I call ‘art activism’.

Many young people, like me, know exactly what Key and his government represent and it is not young people, those living in poverty or the working poor. John Key has managed to alienate a massive demographic in New Zealand and if he thinks his ‘young Nats’ can bridge the divide he is dreaming.

We are not just blindly saying “fuck John Key” because we think it makes us look cool. That kind of [political] anger comes from the feeling that so many of us have been left behind with no employment or under employment. Many of us are struggling with massive student debt we cannot pay back. As the meme goes: 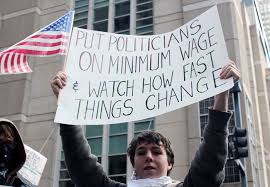 So yes, fuck John Key who thinks there is nothing wrong with hassling young, often over-qualified, people into jobs that do not exist or are underpaid and unfulfilling and thinks ‘we should just be happy with our lot’. Fuck John Key whose government’s welfare reforms have further plunged people into poverty in Aotearoa all in the name of saving a buck but is at the expense of New Zealand’s most financially desperate and vulnerable. Fuck John Key who is a snivelling cowardly Israeli apologist and who is complicit in the deaths of over 1,900 Palestinian people since Israel’s genocidal bombardment of Gaza that started a month ago. Fuck John Key and his rape apologist government who thinks the young men in The Roast Busters just need to ‘grow up’ and who made no apologies to Tania Billingsley for his government’s disgusting handling of her complaint that a foreign diplomat had sexually assaulted her. Fuck John Key for saying Kim Dotcom was Laila Harre’s ‘sugar daddy’ insinuating she is a whore – because casual sexism is cool when John Key does it and he does it a lot.

So from the bottom of my heart fuck John Key and his selfish, misogynistic, rape minimising, war mongering government that only cares for the rich, disregards the voices of young people (unless they are rich and mostly white) and has no compassion for the working poor or those suffering under the poverty line. Because hell, they just need to work harder.

I guess it would have been a mouthful for the students in Christchurch to list all their grievances they have with the National Government at a concert put on by the Internet Party so “fuck John Key” just had to do.

Students and Kim Dotcom chanting at the concert has been likened to Nazism by political marketing specialist Jennifer Lees-Marshment  who said “reminds me of propaganda, chanting-type campaigning more reminiscent of Hitler and fascism [in Nazi Germany] than New Zealand in the 21st century” and  NBR’s Rob Hosking makes this comparison about the ‘mob’ chants:

Firstly, they are being led in the chant by a German who is an enthusiastic collector of Nazi memorabilia and who thinks “nigger jokes” are funny. At this point, a detached observer has to conclude there is a bit of a Nazi-ish aspect to it, and anyone not seeing any Nuremburg-ish echoes is being wilfully obtuse.

Are you kidding me? Given the current situation in Palestine these are a misdirected comparisons to make. John Key has backed the latest assault on Gaza in which Israeli forces, who are armed to the teeth by the Obama administration, have bombed UN Shelters full of innocent civilians and injured thousands – some Palestinian people have lost most of their family to Israel’s bombs and bullets. Why don’t you take your lazy accusations of Nazism, Hosking and Lees-Marshment, and direct them at someone who is complicit in a holocaust being carried out right now? Mr John Key: you and your government have blood on your hands.

Internet/Mana has called on New Zealanders to  ‘Join the Revolution – Change the Government’. The idea of revolution and of radical social change and disrupting the power brokers of this world is at the core of what drove the Occupy Movement. And it is what is driving young students to yell “Fuck John Key” – not cheap booze as Duncan Garner reductively claimed on Thursday afternoon on his RadioLive show.

Internet Party are using open forums for people who have joined the party (membership costs $1.29) on their website. New Zealanders can create and shape policies and voice ideas through Loomio, an open source tool for group decision-making.  Anyone over the age of 18 can for a one off payment of $1.29 log on and propose policies and once posted, others can block, agree or disagree with the policies and constructively comment on them; this is democracy in action. At Occupy camps all over the world we used ‘the human mic’ to capture the voices and amplify the ideas of protesters who were part of the movement. It was an effective and powerful way of hearing each other loudly and clearly and for making decisions collectively. The use of Loomio by the Internet Party represents the same opportunity; to address a problem through public forum and discuss ways to fix and solve social issues that New Zealanders’ think are important.

Our policy development relies on the participation of our membership. Our members contribute to the policies and the general direction of the party from the comfort of their own desks, sofas, beds. People have been amazed at this as though it’s revolutionary, but for us it was the most natural and obvious thing to do. Because how can a political party pretend to represent a section of the population if the people aren’t meaningfully involved? The Occupy movement got this, the Occupy movement was also about voicing the concerns of the people. But the Occupy movement was outside the system, and we will be inside it. We have to work to bring change on every level that we can. It’s imperative that we normalise people participating actively, because at the moment it is seen as radical and threatening.

You want to capture the imagination of young people – especially poor and desperate young people? Capture their voices. Let the youth of New Zealand know you hear them.  Many young people want to change New Zealand and many of us want to change the world. We are idealistic and we are dreamers but we are also educated and determined – and we have time on our hands because we cannot work jobs that do not exist. Youth unemployment accounts for more than one third of unemployment in New Zealand. John Key, we can’t work your fucking ghost jobs. The feminist writer Laurie Penny said “The most important political battles are fought on the territory of the imagination. Young and unemployed people need to know: you are more than your inability to find a job.”

Millions of us around the world are devastated by the state of our own backyards and global communities and we are desperate to change them – the Occupy Movement was epic proof of this. Internet/Mana is offering young people in New Zealand a new political platform to stand on, just as Occupy did. And this is unnerving the establishment. As PR professional Mark Beckham said in defence of Internet/Mana’s video,

The alarmed reaction from the commentariat and twitterati reveals the extent to which the ruling elite are simply not comfortable with real people being political. And here lies the problem at the heart of the professional era of politics; the failure to understand or connect with the untidiness of real people.

As young people we have inherited a world were wars are being fought in our name, of debt and horrific violence and oppression and so many of us are determined to change and disrupt these inequities and brutalities; we can imagine better. We can imagine a country where 285,000 children do not live in poverty. Where the poor and disenfranchised are not marginalised and shamed when they need help, but instead supported and offered opportunities to lift themselves above the poverty line.  We can imagine a world that is free from inequality, racism and sexism. All of this sounds like an impossible dream but this does not mean we stop trying to achieve it. For many of us giving up is simply not an option.

“To be hopeful in bad times is not just foolishly romantic.” Wrote Howard Zinn “It is based on the fact human history is a history not only of cruelty, but also of compassion, sacrifice and kindness.”