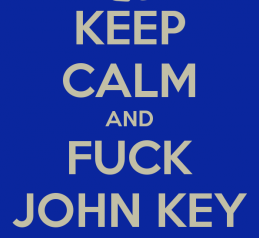 All these two very, very, very, very old female academics have shown by describing a pretty normal night out at a gig as a nazi rally, is that the last time they were out past 9pm was maybe at a Christian Youth Rally sock hop in the early 1970s.

This smear by right wing academics echoes the smears by the satanic jester Matthew Hooton and Bore of Babylon David Farrar, what’s important here is the way those under 30 will be perceiving all this media manipulation. I’ve been swamped by punters who were at the gig incandescent with rage at the manner Duncan Garner and Sean Plunkett have spun this into a neo-Nazi rally, and that’s good. Because people only appreciate the level of bias via the media when they witness an event first hand, and then see how the media spin that event. The anger at the way this has been purposely manipulated into a Nazi rally has sparked a backlash with a large tract of the under 30 demographic. It’s good for the young to see how blatantly manipulative a media organisation like Radio Live and the NZ Herald are. The video has now been seen by over 20 000 people in less than a day – the majority of them are cheering it on, not seeing it as evidence of a Nazi rally. The fact the right wing are stooping to such levels to insinuate Nazi shows how terrified they are.

The day the mainstream media claim chanting ‘fuck John Key’ is Nazism is surely final proof we live in a post irony world.

Personally I can’t see what all the fuss is about, after September 15th, most NZers will be chanting ‘Fuck John Key’.