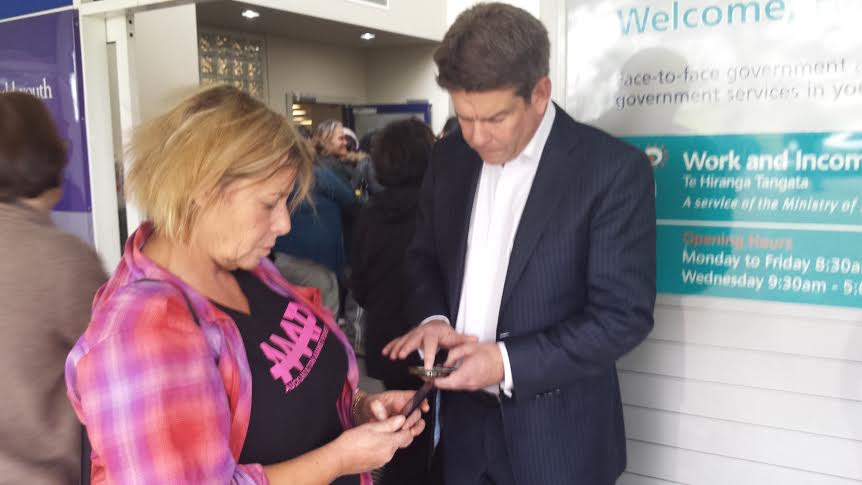 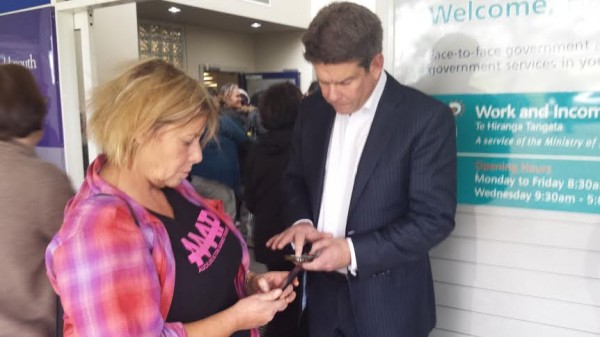 Queues stretching around the block. Crowds flocking to enter a building on the hope that their meagre subsistence can be increased by an uncaring Government Department, whilst the Minister, resplendent in luxury as an Apparatchik, claims that there is no issue. People getting frustrated as there are hundreds of people to be seen by a handful of volunteers and not enough time to see everyone

We are not talking about North Korea. This is not Soviet Russia. This is New Zealand today, 7 August 2014.

I came in late today as I had other appointments. I had to fight my way through the crowds outside the Mangere Community Link to get through the door. Having got in, the WINZ office was more crowded than when the All Blacks play Australia. I grabbed a spare desk as one of two Lawyers who are assisting Auckland Action Against Poverty’s Impact Day, and my day began helping predominantly single mums who cannot name dad.

Before we begin, let me clarify. Last year when I was helping at the New Lynn WINZ office, I had the single mum who was sexually violated. She had her child, and WINZ wrongly started deducting the $20 per week for not naming the father. This was an error, as rape is the exemption, but this error had deducted $20 per week for ten years for being a victim. We managed to secure her a $10,000 rebate at a time that she needed the break!

As we work hard alongside the WINZ offices, we keep getting snapshots of compassion and real, genuine concern from the Case Managers and the clients. As I watched, a Case Manager got up and gave her client a hug. As a beneficiary, I asked my own Case Manager, who I had never met, if I could reschedule an appointment today as I was helping here. He just came up to say hello, having conducted my appointment over the ‘phone this morning.

The media interest is also growing. If Paula Bennett is correct and there are no issues, how come many hundreds of people were here this morning from as early as 7am, willing to wait all day for resolution of their issues? Like the woman who was sitting in a corner, waiting to be seen, when clearly she needed a Doctor and a bed as she was so unwell. The atmosphere is great – people who are struggling with adversity caused by our current Government, about to have their issues sorted on one hand, and the Government Department trying to relieve the situation fairly and efficiently (for a change) on the other.

Almost a party atmosphere prevails, but one caused by hardship, and arrogant thoughtlessness on the part of those in power causing this hardship. This is helped with the media coming and going. John Campbell poked his head around, and has just returned. Lots of people surrounding him, taking ‘selfies’. Maori TV has passed through, as well as others such as TVNZ.

This Impact is really wonderful, but I have two questions.

The first question is why? Why is this needed? Why is it necessary for hundreds of people to swamp a WINZ office to ensure their entitlements are paid and correct? Why is it necessary for John Campbell to come by and do a story on WINZ staff and Beneficiaries working together for a change? Why do people have to come in sick, hungry, thirsty and desperate, when all is well according to this Government? Why is AAAP even needed?

The second question is where? I know AAAP is trying to keep it non-political, but where are our Politicians? Metiria Turei swung by yesterday, much to the horror of the WINZ office. I am here as a private person, though I am on the Labour Party List. We have Green and Labour interest, which is fantastic, but if all is well in the Kingdom of Benefit, where is the Minister to tell us and John Campbell that all is well? Where was the Minister when about a hundred people had to be turned away as we have three days to conduct the Impact? Where is John Key to promote his idea of a fair New Zealand to these voters? Where is Colin Craig and Jamie Whyte to tell these people that they are bludgers? We have had the mouth, so where is the money?

Simon Buckingham is New Zealand’s first diagnosed Autistic Spectrum lawyer. He is a social justice activist and passionate about politics.