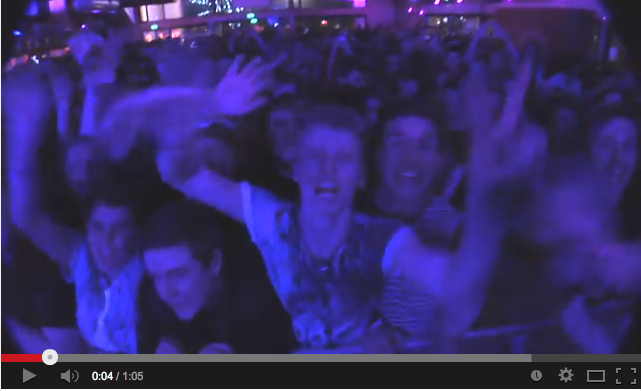 How quick the satanic jester of spin and architect of the Death Star, Matthew Hooton was to insinuate this was evidence of fascism…

…and Government online mouthpiece and special envoy for the Israeli Embassy, David Farrar had the audacity to combine the Internet MANA event and anti-semitic graffiti while gurgling with empty fury.

As for Claire Robinson and her so called expert opinion…

…Claire has spent the last 6 years on a semi-permanent job interview for the National Party ever since they came to power so for her to tut tut and finger wag is more tedious than it is insightful.

The rank hypocrisy of all this is the crocodile tears of how awful and abusive Kim Dotcom is for having these students chant ‘Fuck John Key’ when John Key speaks regularly with far right hate speech merchant Cameron Slater all the time, and Slater only recently was trying to insinuate Tania Billingsly is some sort of Green Party honey trap who lures men to her home as bait so she can scream ‘rape culture’.

And that’s Slater on a good month.

You want to get angry about something, get angry about the grinding inequality and quarter of a million kids in poverty and the demise of our environment and the fact we’ve locked out an entire generation from home ownership. Get angry about privatisation of our assets or the $10 billion Key has borrowed in tax cuts or National signing away our economic sovereignty under the TPPA while creating a mass surveillance state – but don’t bring us your fake outrage at students telling the Prime Minister to fuck off, because after September 15th, I suspect most of the country will be saying that.

Farrar and Hooton are speaking to NZ First voters, trying to spook conservative dear old Winston away from these scary uncouth radicals towards smiling John Key, problem for Farrar and Hooton is that Winston might not get over 5%.

As the election gets closer, the Right will get shriller. The song goes ‘Fuck you I won’t do what you tell me’ not ‘please Mr Key can I have some more’.

The Youtube clip now has over 11 000 views. Internet MANA probably just went up .5 of a percentage.

I think the moralistic over reaction by many old pundits to the Internet MANA gig will be a sharp lesson to youth on how reactionary the mainstream media are to an issue they have direct experience of. What was posted was what normally happens at a gig, youth hearing how that normalcy is being turned into evidence of neo-nazism in NZ will slap many in the face.