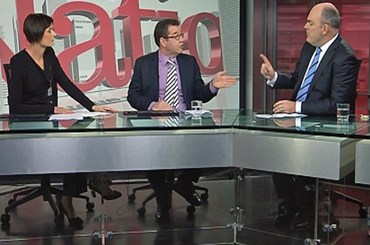 Over the weekend at TV3’s The Nation we saw conclusive evidence of National’s 2014 Election Strategy: DO NOT TALK POLICY.

Steven Joyce was bullying and boorish. He consistently interrupted and talked over both Grant Robertson and the host, Lisa Owen. At one stage, Joyce would not let Owen cut to a break and continued talking like a spoilt child angry at his Christmas presents.

Grant Robertson also interrupted Joyce. In my view, he had no choice – he could not allow the bullying to stand. He had to be assertive and challenge this aggressive and adversarial behaviour. I was impressed at the way he stood up to this bully – kudos to Grant, but how disappointing he had to do it.

Make no mistake, the disappointing tone of the “debate” was set by Joyce. He made it impossible for either Robertson or Owen to speak without shouting. As a result, the “debate” itself was a complete mess. It was terrible to watch and did nothing substantive to contribute to any reasonable discussion around policy and the role of government in economic development. That, after all, was the point of having both of them on the programme.

I found the panel after the “debate” more helpful in terms of thinking about our economic development. Both Selwyn Pellett and Fran O’Sullivan brought real analysis to how we leverage our greatest assets and think longer term about injecting more value throughout our economy.

Along with diversity, the question of foreign ownership of our assets is a serious question. We cannot be flippant in how we deal with this issue. We need to find the correct balance between creating foreign direct investment to supplement our own lack of cash while ensuring a reasonable share of the profits and benefits from such investment stay in New Zealand.

There is nothing xenophobic about having a clear and articulated regime around foreign investment. The Chinese do it. The Aussies do it. We need a stronger and more comprehensive regime focused on developing our economy, not some laissez faire approach ignorant of our realities.  This is actually a critical plank of any economic development strategy.

Yet, none of this was actually discussed in any intelligent way in this “debate” around our economic development.

But, of course, this is a deliberate and planned outcome from the debate consistent with National’s strategy this election. It is straight from the Crosby/Textor playbook. We have seen examples of it before, such as when Simon Bridges came out swinging against John Campbell throwing more angry combinations than most Commonwealth boxers. Lead out aggressively, make the attacks personal, do everything you can to avoid being held to account, speak loudly and quickly while certainly making sure to do nothing around discussing your actual plans for the future.

Some of you might say: “who cares? Only politicos watch this show anyway.”

Well, it does matter. First, because we are entitled as an electorate to have an open and transparent discussion around the direction we are heading as a country. This is especially so given our reduced manufacturing and over-reliance on dairy. Second, the bite size lines do stick and go further than the viewers watching this show. The headline on The Herald website was that Labour was accused of being xenophobic. It is deliberate, and plays into our superficial analysis of our country’s direction.

What is clear is that National does not want to talk policy. Because the reality is that National is still mired in a disproven ideology meaning that their overall policy is to have no policy.

The free market mantra remains their catch call and they are happy to leave things to the “invisible hand” of the market. Well, that hand is pretty invisible. Despite this ideology being fundamentally disproved by the Global Financial Crisis, the economic elite have no reason to abandon it. It continues to serve their purposes with no serious accountability for the failure of that ideology as seen in New Zealand through this government’s corporate crony capitalism and the windfall of the sale of public assets.

The problem is that this theory follows completely false assumptions. The free market theory, adopted to organising our social structures, depends on individuals being inherently suspicious of each other and driven only by self-interest.

But, that is not how we work.

Humanity works best when we are compassionate, collective, and caring. Who would deny that? Look at our most concrete social structure: the family. Do families work best with members inherently suspicious of each other and driven only by self-interest?

This theory of self-interest and individualism assumes a lack of faith in humanity. We need to reject that assumption, reject thirty years of neo-liberalism, and work towards recreating Godszone reflective of the values we share as New Zealanders.

When people say that there is no difference between Labour and National, I challenge that. Look at the policies of the respective parties – go to their websites. Labour has policies covering a range of issues: housing, education, youth employment, raising the minimum wage, regional development… Actual ideas. National wants to bring a corporate model to education, build more inefficient roads in their Minister’s electorates, and spy on all of us.

Labour’s policies directly acknowledge the role of government. Along with the other progressive policies on the ticket, we are starting to see – albeit at snail’s pace – a response to the failures of neoliberalism resulting in our developing inequalities.

Actually, if you really want to know National’s policies, take a look at ACT’s website. That’s where you’ll find ‘em.