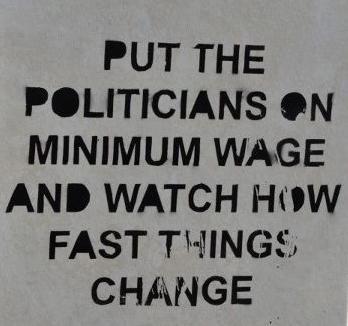 Labour recently announced a policy which evidence strongly indicates will impact positively on every low-wage earner in this country; families;  as well as benefit small-medium businesses;

The knee-jerk reaction from Dear Leader Key and his little wannabe side-kick, Simon Bridges, was as predictable as the sun rising;

Key hit back at the announcement.

New Zealand already had the highest minimum wage relative to the average wage in the developed world, he said.

Pushing it up too too fast would cost jobs.

“It’s pretty well documented around the world that, yes, you can make changes and do that over time but if you think about the mass of employers in New Zealand they’re not the big companies like Fletcher Building or Fonterra they’re actually the hundreds of thousands of small businesses around New Zealand and they simply will employ less staff, fire people or ultimately not take on staff in the future.”

“Labour’s policy to immediately increase the minimum wage to $16.25 would cost at least 6000 jobs … If you want to make people unemployed this is a good way to go about it,” he said.

So how true is it that raising the minimum wage “would cost 6,000 jobs”?

As far back as November 2011 (the previous election campaign)  Key repeated the mantra  that  6,000 jobs would be lost if Labour increased  the minimum wage to $15 an hour.

However,  those bright young things at Treasury  seemed to hold a radically different view;

“The Department of Labour says the rise will cost 6000 jobs. But Treasury has a counter view; “This has not been true in the past. The balance of probabilities is that a higher minimum wage does not cost jobs.”

Indeed, according to a report on the Australian Business Insider, the notion that increasing minimum wages led to unemployment was “exploded as a myth”, after it was revealed that;

“…  a November 2011 study from Barry Hirsch and Bruce Kaufman of Georgia State University and Tetyana Zelenska sheds light on how businesses respond to increases in labour costs, and the results were surprising.

The group surveyed managers of fast food restaurants in Georgia and Alabama as they contended with three annual increases in the federal minimum wage between July 2007 and July 2009.

They asked the managers if they were taking any steps to offset increases labour costs.

…only 8 per cent of managers surveyed thought that firing current employees was at all important to make up for lost wages.

Indeed, raising the minimum wage allowed management to extract more performance from current employees in more than half of all cases.

Higher labour costs weren’t only offset from cuts to total labour cost, either. Management also took several steps to increase efficiency and productivity to compensate for the higher costs… “

Further, our study does not find evidence of clear-cut employment losses – even
over three years and a 41% increase in the MW. Possibly over a still longer time span, or with a larger
sample of restaurants, a negative effect might appear. Discussion with owners and evidence outside our
study period suggest that negative effects may manifest through reduced store openings and increased risk
of store closings. Given this important qualification, the message from our study, along with other results
in the literature, is that employment effects in the short-to-medium run are small, perhaps near zero in
many settings, and certainly smaller than expected based solely on the competitive model. It would be
surprising (at least to us) were an important reason for this result not the behavioral dimensions of wage
setting and human resource management (e.g., discretionary effort, equity concerns, management heterogeneity)
that the standard competitive and monopsony models largely ignore.

Here in New Zealand, the minimum wage has risen fifteen times since March 2000;

So how do those increases compare to our employment/unemployment rates? Let’s superimpose the dates for each increase in the adult minimum wage with numbers of  employed persons. (Red vertical bars indicate increase in minimum wage. All data courtesy of Dept of Labour/MoBIE.)

The above graphs reveal the following;

So would increasing the minimum wage benefit every low-wage earner in this country; families;  as well as benefit small-medium enterprises (SMEs)?

Why do critics – usually adherents of neo-liberal dogma and National Party ministers, supporters,  and fellow-travellers – vociferously deny the advantages of raising the minimum wage?

Neo-liberals who maintain that increasing the minimum wage creates job losses see only one half of the Grand Picture. They see money flowing from employers to employees – and that’s as far as they see what is happening.

What they are missing is the second half of the Grand Picture; those employees do not bury their extra pay in the back yard, forever consigning it to the earth as compost.

Instead, employees spend their pay increases.

There are currently 54,600 workers currently on minimum wage in this country.

That’s a whole lot of extra groceries, clothing, shoes, appliances, medication,  and other essentials and  consumer goods being purchased in our economy.

All of a sudden, small-to-medium businesses will have 54,600 potential customers spending an extra $227,136,000 annually(gross). Plus additional tax-revenue gained by the State. Plus less paid on welfare, as more people are employed.

Right-wingers will make the oft-parroted, plaintive cry, “But where will the money come from?”

The answer; from the productivity created by those 54,600 workers. They just get to keep more of that productivity, instead of  into the bank accounts of invisible share-holders or disappear off-shore to corporate owners.

The logic is clear-cut; increasing the minimum wage increases spending power; generates more economic activity; and achieves the same goal which Key & Co used to justify their 2009 and 2010 tax-cuts;

“…The tax cuts we have delivered today will inject an extra $1 billion into the economy over the coming year, thereby helping to stimulate the economy during this recession. More important, over the longer term these tax cuts will reward hard work and help to encourage people to invest in their own skills, in order to earn and keep more money.”

If  tax cuts for the rich can help “stimulate the economy“, then so can a livable wage increase for 54,600 low income earners.

It cuts both ways.

Even as Key has stated on numerous occassions,

“I don’t want our talented young people leaving permanently for Australia, the US, Europe, or Asia, because they feel they have to go overseas to better themselves.” – John Key, 15 July 2009

“Science and innovation are important. They’re one of the keys to growing our economy, raising wages, and providing the world-class public services that Kiwi families need.” – John Key, 12 March 2010

Evidentially speaking, the data above shows;

Key’s assertion that lifting the minimum wage would lead to “6,000 jobs lost” is therefore patently false, and electioneering with peoples’ lives.

Australian Business Insider: A 2011 Study Exploded One Of The Biggest Fears About Raising The Minimum Wage