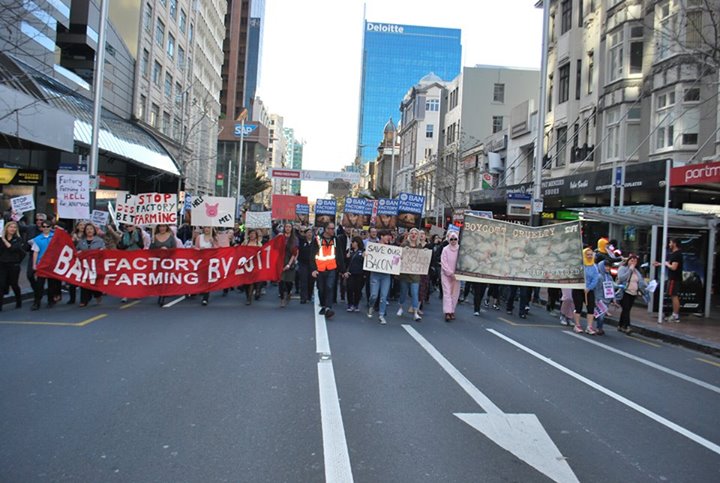 Revelations that the Pigcare Accreditation scheme is still failing animals despite protestations from the Ministry, resulted in a day of national action across the country last Saturday. Thousands rallied in the centres against factory farming for a historic outcome for animals. For the first time in New Zealand history all of the left-wing parties and the major animal advocacy organisations spoke out in unison. Labour, the Greens, the SPCA and SAFE stood side-by-side and powerfully echoed the sentiment of thousands of Kiwis. The message is clear; factory farming isn’t our future.In Auckland Labour candidate Clare Szabo addressed the crowd and informed us of something of pivotal importance. She told us to stay tuned for new policy from Labour that would see an end to all intensive factory practises. Labour acknowledged once and for all that these abhorrent confinement industries are not what New Zealanders want. And we know the Green Party would also see an end to forms of industrial cruelty.We want to see all New Zealand political parties on the same page with this, yet John Key and National have been shamefully flippant about the importance of real change and Nathan Guy keeps spinning the same nonsense. They say the accreditation scheme is “working fine” and these are “one-off” instances. If they are “one-offs” why is the Ministry so reluctant to properly legislate against confinement and such conditions? Why does the Ministry keep pushing back the date to end all cage practises and make no substantial changes? The answer is this, they are absolutely aware that these instances not “one-off” and if they do outlaw these practises it would cost farmers whose financial interests are deemed more important than welfare concerns. Every day Kiwis know that we do not want such cruelty to exist and we damn well know that ethical considerations matter. We are not devoid of compassion and know that money isn’t the only consideration that must be made. We do not want animals raise in hell holes that have no right to exist. We do not want animals to be caged. Animals deserve safety, freedom and protection, just as people do and other countries have legislated against such practices. It’s a travesty that these issues keep being ignored by the right.It’s time National got on board. Our welfare system is anything but “world class” and the public have no more interest in this spin. It’s time for action. Here the flaws in our careless animal “welfare” system areoutlined by Catriona MacLennan, co-ordinator for the Animal Agenda Aotearoa, a project that would see MPs alterted to the voice of the people.We need to continually apply pressure on this issue and you can do so here. Please never underestimate the power of your voice; of talking about these issues actively, and of contacting your MP. Better still, take radical action, become an advocate, boycott pork or simply stop eating animals altogether. It’s up to us to take a stand and be the voice of the voiceless, because if we don’t stand up for these animals, who will?