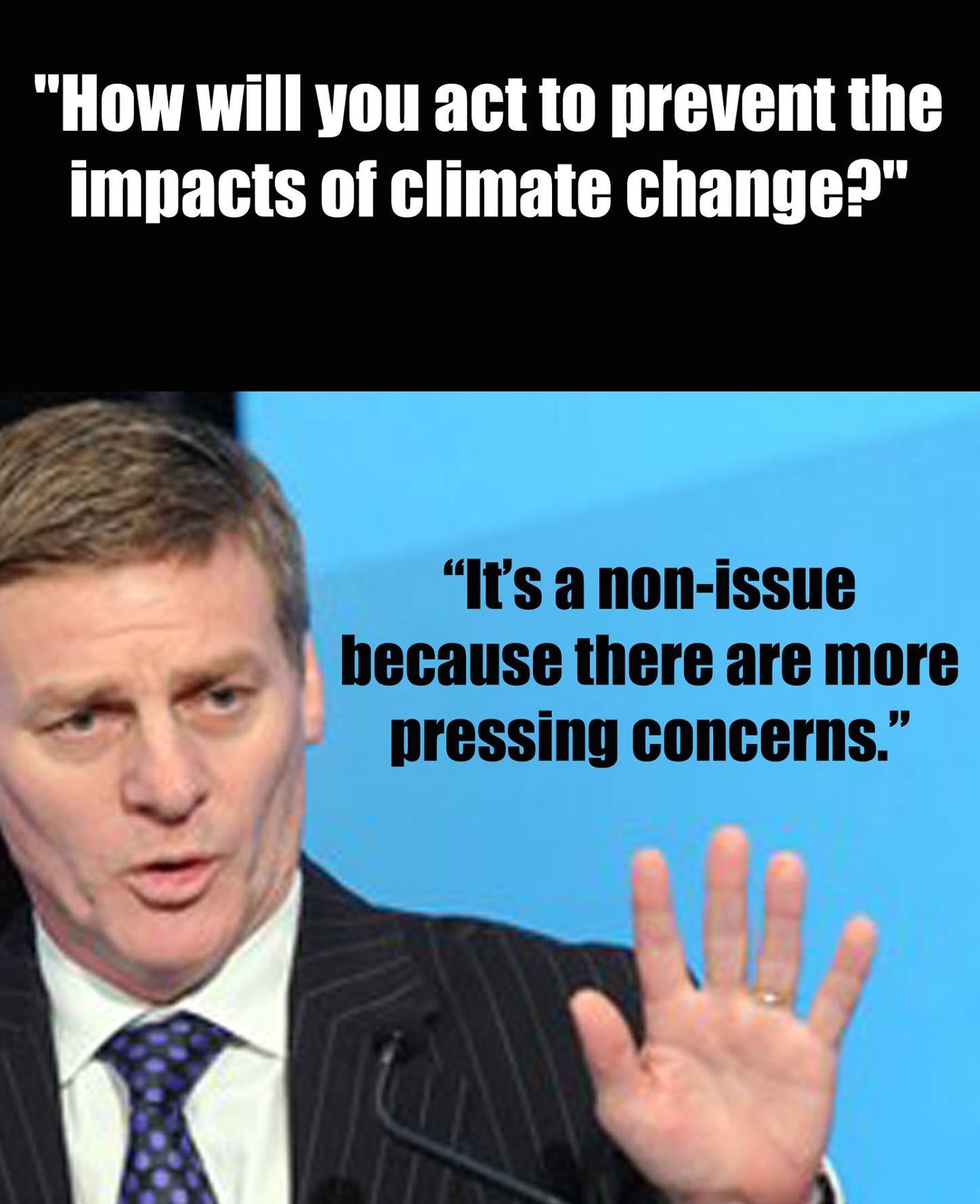 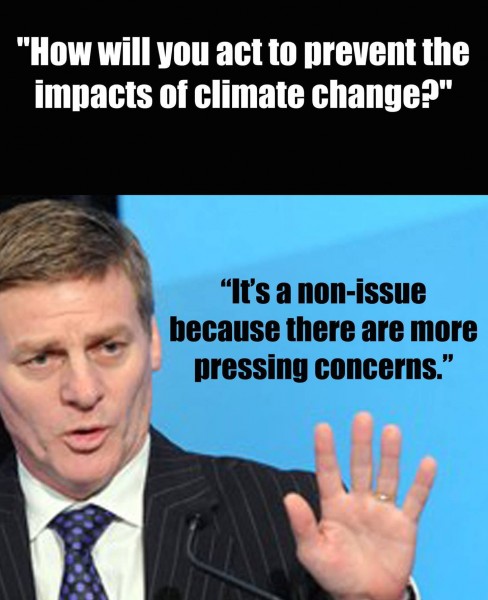 Bill English’s unguarded statements on climate change demonstrate just how out of touch the National Party leadership really is, and how important it is that they should be forced to face facts.

A couple of weeks ago finance minister Bill English told a public meeting in Kelston what he really thought about climate change. According to a Generation Zero member who took notes, English didn’t bother with the usual lip service to climate action.

He claimed that recent reports “show that the way the world is moving is increasingly towards climate change adaptation rather than mitigation”, and said adaptation policy was “more prudent” than mitigation strategies.
As best as I can recall, National’s approach was described as: “Business as usual for us in terms of climate change policy; the incentive to act will only be determined by the effects on the constituents, i.e adaptation when the time comes.”

It’s difficult to overstate just how stupid English’s statements are. They are the views of a man — a powerful man, a man at the heart of government — who does not understand the first thing about the climate problem, but who is quite happy to pontificate as if he were an expert.

There is no either/or when it comes to mitigation (cutting emissions to prevent future damage) and adaptation. We have to adapt to the changes that are happening now, and that are inevitable for the next half a century, but if we fail to cut emissions at the same time we commit the world — and future generations of New Zealand voters to wholly unnecessary extra damage.

English is either misreading what is really happening in the world — handily summarised by the IPCC and the latest “state of the climate” report — or wilfully misrepresenting it. A charitable observer might allow him his ignorance, and ascribe his comments to self-serving hubris. A cynic might point to the National government’s lip service on climate policy and the environment, and believe that English had let slip what the government really thinks.

English doesn’t bother to pay the usual lip service to doing our bit, or being in the forefront of action — the platitudes that Tim Groser and John Key offer at every opportunity. There’s only the glib certainty that other issues are more pressing, and that climate and the environment should take a back seat to economic growth at all costs.

Even on economic issues, where the finance minister might be expected to know a thing or two, it appears he’s out of touch. A new report by President Obama’s council of economic advisors finds that delaying action to cut emissions increases the cost of climate impacts by 40 percent over ten years.

The government’s disinterest in climate policy is evidenced by their complete failure to front up to the weekly questions posed by the Climate Voter campaign. With eight weeks to go to the election, the National Party’s polling must be telling them that climate is not an issue that their core support or target voters care about.

That’s a failure of governance and a failure of the political system as a whole. What’s needed is a generation of politicians who are prepared to stand up and confront reality, and provide real leadership on this issue. Only the Green Party shows any systematic understanding of what’s required in the run up to the election. But climate change is not an “environmental problem” or a “pollution problem”, an issue to be shoved into one policy portfolio or another, or relevant only to one party.

It’s not a left wing or a right wing thing; it’s an existential crisis, and we should not be playing party politics with it. If we don’t cut our carbon emissions quickly and steeply, we run the risk of consigning our civilisation — or at the very least, the way of life we have come to enjoy — to a very large and commodious dustbin. Ask the focus groups what they think of that, Bill.

That’s what English doesn’t understand, and that’s why his glib nonsense makes me despair. I know there are sensible people in the National Party. Will they not stand up for the future of New Zealand and the planet? Or are they just another bunch of time-serving politicians climbing a greasy pole erected in the wrong place, at the wrong time, by the wrong people?