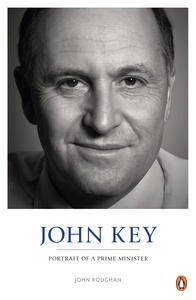 Aspiring national leaders need a popular narrative of their rise to power.  Once in office, the narrative can be refined to fit the requirements of leadership and re-election.  Such is the purpose of John Roughan’s John Key: Portrait of  a Prime Minister.  The portrait is superficial and selective yet inadvertently revealing.  Key’s attributes, as Roughan describes them, can also be perceived as shortcomings from a more critical standpoint.  There is also another, less palatable side to the Prime Minister which his apologists neglect to mention.  So, with these initial observations in mind, let us begin our dissection.

From Roughan’s narrative and my own evaluations, John Key’s attributes/shortcomings translate into three rules of conduct.

John Key’s first declared ambition was to make a million dollars and become Prime Minister.  He was driven by the need to compensate for the failings of his distant and troubled father, George, and to honour the fortitude of his mother, Ruth, who raised the family, often in straitened circumstances.  A Jewish emigrē from Nazi Europe, she insulated John and his sisters (Liz and Sue) from the trauma of their family past.  In retrospect, Key’s early ambitions are understandable yet disquieting.  There was no indication as to how this fortune might advance the New Zealand economy.  An earlier generation of businessmen had built the agricultural, forestry and manufacturing sectors before contributing to public life.  Key’s business career was forged within a finance culture of speculation; money was traded to make money rather than finance the productive economy.  During the 1990s, when Key made his fortune, individual aspiration was synonymous with financial success.  Neo-liberalism had already decimated the Bretton Woods currency system and Keynesian social democracy.

In this context, John Key’s political ambitions did not require any thought-out declarations of ideology or national calling.  Financial success, political smarts, televisual presence and general affability would do the job.  No-one else in the National Party had this package of attributes.  Politics, like business, was about results not overthinking.  As Roughan observes, Key has cut his cloth superbly for the political career he had in mind; others might ponder the absence of any higher purpose.

John Key is truly made of teflon, as a financier and politician.  During the mid-to-late 1990s, his employer Merrill Lynch was mired in corruption.  In 1994, they were prosecuted by the US Securities and Exchange Commission (SEC) for securities fraud in connection with the 1994 bankruptcy of Orange County in California.  Basically, Merrill Lynch invested the county securities into an investment pool that failed, resulting in a US$1.6billion loss.  Investors and county officials were not forewarned of the danger.  The SEC also indicted Merrill Lynch executives for aiding and abetting American energy company Enron’s violations of the anti-fraud and internal controls provisions of Federal securities laws.  Although Key was not directly involved in such matters, they reflect an organizational culture which generated ethical controversy.  Key’s evaluation of this situation is nowhere to be found in Roughan’s biography.  Fast forward to the 2005 election campaign and the Exclusive Bretheren scandal.  Nicky Hager has argued that on May 24, the sect’s plans for a $1million pro-National “Wake-Up New Zealand” campaign were put in writing to party leader, Don Brash, and finance spokesperson John Key.  Brash’s knowledge of the Exclusive Bretheren’s intentions became a live election issue and effectively ended his political career, after Helen Clark’s return to office.  John Key’s role in the controversy became a non-issue as his political star rose.  Similarly, Teflon John was left untainted by scandals surrounding the international convention centre deal with Sky City Casino and the Government’s subsidization of Rio-Tinto Alcan (owner of the Tiwai Point aluminium shelter) in 2013.  And, the Government’s support for Chorus and intimidation of the Commerce Commission concerning their decisions on copper and fibre optic pricing has not damaged the Prime Minister’s standing at all.  More recently, Donghua’s donations to the National Party and Judith Collins’ associations with Oravida have raised ethical concerns about ministerial conduct without affecting John Key.  All of these examples attest to Key’s political adroitness and media skills, yet a certain uneasiness remains.  He prefers to ignore or downplay the ethical controversies which have surrounded him.  His signature response seems to be “I’m comfortable with that”.

Roughan candidly admits that our Prime Minister is uninterested in philosophy, social sciences, economics or history:  ‘Key is not a reflective man, given to dwelling on his own past, or that of the country he governs’ (pp 14-15).  This is a salutary rather than a critical judgment.  Although ‘history matters for lessons that need to be remembered’, it seems that ‘the past is less important than the present and the future is made by what a government does today’ (p 15).

For John Key and the National Party, this a-historical outlook has worked a treat.  Why relitigate ideological battles from the 1980s and 1990s?  Major economic reforms had to be made, what’s done is done.  The New Zealand economy is tracking well under the sound stewardship of John Key, Bill English and Steven Joyce.  All oppositional viewpoints are anachronistic and dangerous by definition.  This is a difficult orthodoxy to break down if the electorate itself has a diminishing sense of the national past.  As the percentage of overseas-born New Zealanders increases so does national amnesia.  Thus, it scarcely matters that John Key can’t recall his position, say, on the 1981 Springbok tour, if much of his support base wasn’t even here then.  For the purposes of re-election, a-historical and a-political sentiments are pandered to rather than criticized.  John Key makes this strategy work by embracing national mythology.  As Tourism Minister, he has advanced New Zealand’s ‘clean, green’ image against sad-sack Greenies who moan on about polluted waterways and dirty dairying.  The aspirationally successful Key family appears in The Women’s Weekly and other popular media.  John’s political success is equated with New Zealand sporting success.  A recent Rugby News front page deliberately positions John Key as one of the All Blacks.  Their recent unbeaten record merges with the Prime Minister’s political supremacy.  At the same time, strategic appearances at gay and lesbian pride events signals a tolerance for social diversity (so much for the Exclusive Bretheren).  This is a man who feels comfortable anywhere; at the beach, the barbecue, the rugby, or social minority gatherings.  He is an everyman for every occasion where no-one asks pointy-head questions about the future of the country.

On Roughan’s account, John Key is equally at ease playing golf with Barack Obama as he is at a family barbecue on the Queen’s Balmoral estate.  The hosts are willing and happy to converse with our Prime Minister.  ‘Local boy made good’ is the obvious message here, an ordinary New Zealander, one of us, mixing with the truly elite.  However, there is an unstated reason for John Key’s popularity – his subservience to power.  Obama would have welcomed Key’s unquestioning support for the Afghanistan campaign.  In 2009, with the security situation worsening, the government complied with a US request to redeploy the SAS in a frontline role, notwithstanding the dangers involved.  In February 2011, Key extended the deployment for another 12 months.  In the year previous, Key had acceded to American corporate power.  Warner Brothers forced amendments to New Zealand labour laws as a prerequisite for filming the Hobbit here.  In January 2012, pressure from both music and film companies compelled the government to facilitate a SWAT-style raid on Dot-Com’s Coatesville mansion.  For Obama, this must have been worth several extra rounds of golf with the New Zealand Prime Minister.  The Queen’s hospitality to John Key and family is also understandable.  Pleasantly surprised she must have been in August 2009 with the reinstatement of Knights and Dames to the New Zealand honours system.  Further Royal Tours are in prospect.

Although none of these initiatives has dented John Key’s domestic popularity, New Zealand’s national autonomy has certainly declined.  His subservience to the US Presidency and English royalty is redolent of the 1950s rather than the early 21st century.

John Key, Bill English and Steven Joyce portray themselves as rational economic managers even though their initiatives are designed to protect the wealthiest of their supporters.  There is no other way to explain the 2008-10 tax cuts, the refusal to consider a capital gains tax, taxpayer subsidies for South Canterbury Finance and Rio-Tinto, the low-interest loan for Mediaworks, the sweetheart deal with Sky City Casino, and the partial privatization of Mighty River Power and Meridian.  Correspondingly, the Government refuses to address clear evidence of structural inequality.  Job creation, housing initiatives for poorer families and an increased minimum wage appear nowhere on their policy landscape. Indeed, if National is re-elected new anti-union legislation will threaten the living standards of many working families.  None of this should be especially surprising given that the John Key narrative privileges individual aspiration over equality of opportunity.  It is worth remembering though that John Key’s own accomplishments were made possible by a fairer economic system; namely, Keynesian Social Democracy and the Welfare State.

Russell Norman’s comparison of John Key and Robert Muldoon is partially true.  For a neo-liberal politician, John Key’s advancement of executive state power at the expense of democratic processes is remarkable.  Lindsay Perigo and Jamie Whyte are no doubt aware of this.  Back in 2010, Environment Canterbury’s 14 elected councilors were summarily dismissed.  After the September 2010 and February 2011 earthquakes, Christchurch became a government fiefdom administered by Gerry Brownlee, the City’s de-facto Prime Minister.  The 2010 re-writing of New Zealand employment law, courtesy of Warner Brothers, effectively subverted New Zealand’s parliamentary sovereignty.  The systematic collusion between Sky City Casino and John Key’s administration during 2013 precluded future governments from cancelling or relitigating this arrangement, a legally questionable dictate to say the least.  Furthermore, Sky City was promised seven years of protection from taxes.  The recent passage of the GCSB Bill and the Telecommunications Interception Bill constitutes the biggest threat to individual liberty since the Public Safety Conservation Act of the early 1950s.

Another term of National Government will advance executive power further.

As the preceding discussion suggests, John Key is not invulnerable and his carefully packaged biography is open to dispute.  The real question is this:  who has the capacity and kudos to take the Prime Minister on?  No such person exists in a Labour Party which is thoroughly compromised by neo-liberal economics and racked by internal division. In my estimation, two political figures in particular have the intellect and street smarts to seriously challenge John Key:  Russell Norman and Hone Harawira.  Not surprisingly, the Prime Minister loathes each of them in equal measure.  They both have the capacity to publicly dissect the official portrait of John Key.  If they and their supporters can do so, the election night result may yet stymy the Prime Minister’s carefully laid plans.