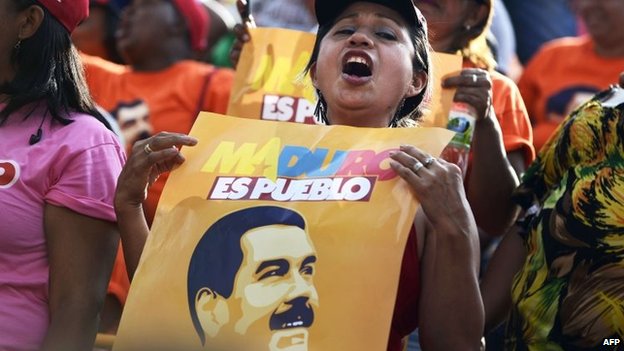 Since the 1980s we have had drubbed into our heads that there was no alternative to the economic and social policies unleashed at that time. It even had it’s own acronym – TINA.

The brutal reality was that wherever these policies were applied with force and rigour the growth rates declined and inequality and poverty grew massively.

This was true for New Zealand, the US, the UK, and most of Latin America.

Unfortunately for the Anglo-Saxon world there has not been much change. But in Latin America we have seen dramatic shift to the left in governments across the region. This includes Brazil, Argentina, Venezuela, Bolivia, Ecuador, Uruguay, Nicaragua, El Salvador and Chile. Left wing presidents in Honduras and Paraguay were overthrown in 2009 and 2012 respectively in US supported coups. There has beeen a flowering of social and economic policies that have recalimed national resources and directed social supports to the poor. As a consequence economic growth rates have improved (despite the 2008-9 world economic crisis) and poverty and inequality has been reduced in country after country.

We have the relatively mild left seen in Brazil under President Lula and now Dilma Rouseff from the Workers Party (WP). The WP never had a majority in their congress so it is hard to know what they would have done in those circumstances. However, they did preside over a major decline in extreme poverty rates from a relatively simple policy called bolsa familia which provides a cash payment family benefit to millions of poor families with the only condition being that the kids go toschool and get health checkups. Paying cash directly to families with children met stiff opposition. New Zealand also used to have a universal benefit that paid a cash benefit for all children. That was eliminated in the 1980s and been replaced with in work tax credits for the working poor.

At the further left of the spectrum we have the governments of Bolivia and Venezuela. In both cases the governments have emerged out of mass struggles over many decades that have provided a tested leadership determined to lead a mass democratic revolutionary transformation of their societies. They have challenged the corrupt elites, nationalised large swathes of the economy, empowered indiginous communities and are trying to create a real peoples power to replace the old state machine.

In Venezuela growth rates more than doubled in the period of the presidency of Hugo Chavez. More importantly the revolutionary government siezed control of the ostensibly state-owned oil company in 2004 which was being used to siphon wealth off to a corrupt layer in the state and business into an instrument to fund social programmes that benefited the poor. Poverty rates radically declined, income inequality declined, education enrollments exploded, illiteracy was eliminated, health care was established free for all and available through clinics being estab lished in all communities. Even inflation which remains stubbornly high was halved on average. However the last two years has seen a surge in inflation once more and the debate on what steps are need ed to advance the revolution has broken out publicly. The government remains committed to protecting the low paid and poor so social programmes and large increases in wages and pensions continue to be mandated by the government.

In Bolivia, the nationalisation of the giant natural gas fields brought a dramatic improvement in government income that has been ploughed into improved social programmes. Health and education have become rights for all not a luxery for the few. Illiteracy has been eliminated. (See Bolivia: A glance at the most important achievements of the new economic model).

A key facftor ensuring popularity for some tof these governments has been the solidarity and support of revolutionary Cuba. Thousands of doctors and teachers were able to be sent to provide immediate and tangible improvements in the lives of the majority while new infrastructure was being built and doctors trained for the long term.

Because Venezuela has substantial oil wealth it has been able to use this wealth to assist other left wing governments in the region. This was true in particular in the very poor countries of El Salvador and Nicaragua where former revolutionary guerrilla movements now hold elected office. The remarkable election in El Salvador last month are discussed here. A review of the comeback for Daniel Ortega and the Sandinista National Liberation Front in Nicaragua see Nicaragua Vive! 35 years since the triumph of the Sandinista Revolution. This alliance between the most progressive and revolutionary governments has been formally constituted as the ALBA (formally, the Bolivarian Alliance for the Peoples of Our America – Spanish: Alianza Bolivariana para los Pueblos de Nuestra América). 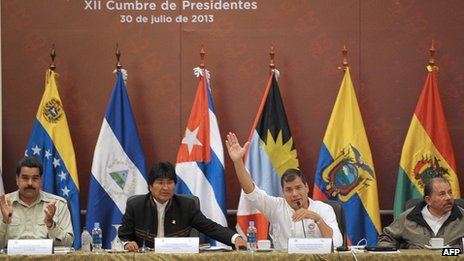 Also important to progress being able to be made in the face of US pressure and hostility has been the ability of China to provide alternative trade outlets to that of the US. Just this month the BRIC nations (Brazil, India, Russia, China and South Africa) announced the establishment of a financial system outside the control of the Western dominated Bretton Woods system. The US continues to insist on free investment protections in so-called “free trade” agreements before opening up their markets. These investment protections would have made it impossible for any country to take control of their resources if they were already controlled by foreign capital.

What would have happened if these countries had followed the neoliberal model is also demonstrated by what happened to that of the rest of Latin America. In 1993 Mexico signed a free trade agreement with the USA and Canada. Since then “while countries like Brazil and Venezuela have lifted millions out of poverty, Mexico’s stagnant poverty rate and growing population meant that an additional 14.3 million people were left below the poverty line in 2012 as compared to 1994, the first year under NAFTA”. (SeeNafta Advocates continue to make misleading claims).

The different governments of the “left” have mant different approaches to the challenges they face. What they have in common is a rejection of the so-called “Washington concensus” that proved to be such a disaster for their individual countries and their region for most of the 1970s, 1980s and 1990s. One difference that has emerged in recent years has been governments being elected to office that openly declare that their objective is to overthrow capitalism and create a new peoples power based on conscious mass involvement. This experience is discussed theoretically in a 2010 article by Marta Harnecker called “Ideas for the Struggle” and a new book called “A World to Build

New Paths toward Twenty-first Century Socialism”. In these develops the view that is it important to win government through elections if possible. But winning an election is not winning power. It is the beginning of a “process of peaceful, institutional transition, with many limitations that have to be understood.” To succeed “a broad national majority is needed in order to advance in a democratic manner towards a new society…. Therefore, not only is the unity of revolutionaries fundamental; we must also be capable of convoking all those who share a common vision for a more just and solidarity-based society.” (See an interview with Marta Harnecker on El Salvador, a new progressive hope in Latin America.)