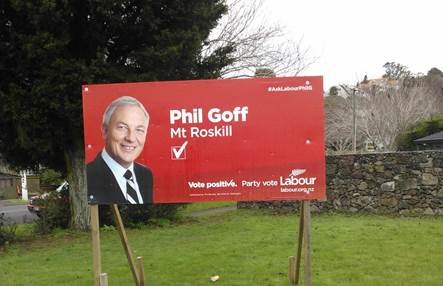 IT’S A LITTLE TRIANGLE of grass at the corner of Rewa Street and Mt Eden Road, ideal for election hoardings. Wandering along Mt Eden Road last Saturday morning to our weekly appointment with the brunch menu at Orvieto, my family and I couldn’t help noticing that overnight an election hoarding had gone up.

The prize for the first of these public symbols of electioneering to appear in the Auckland suburb of Three Kings went to Internet-Mana. But only just. As we walked along, two teams of young men bearing armfuls of timber and Korflute® poured out of cars and vans and into the triangle. By the time we emerged from the café National and Labour had also staked their claims to our attention.

Well, I say “Labour” but, really, the hoarding facing us was all about Phil Goff. It was his ugly mug and buck-toothed smile that confronted the viewer, and his name in bold sans-serif that somebody had helpfully placed a big tick underneath. Oh sure, right down the very bottom you could, if you squinted hard enough, make out the Labour Party’s slogan “Vote Positive”, and yes, there was even an exhortation to “Party Vote Labour”. But, seriously, nobody driving by is going to have time to register anything other than the local MP, Phil Goff, is soliciting their vote.

I’m told this is happening all over the country. That the hoardings erected by Labour electorate MPs are, overwhelmingly, self-promoting. Not the party (unless you have very good eyesight). And certainly not the Leader. (God forbid!) In spite of delivering the worst result in 90 years, the so-called “election strategy” of 2011, promote the candidate – not the party, is being idiotically repeated – by the same idiots!

The contrast with National’s hoardings could not be more stark. They all proudly include a photograph of John Key – either alone or included alongside the local candidate. And there, directly below the party’s 2014 election slogan: “Working For New Zealand” is the concise instruction to “Party Vote National”. 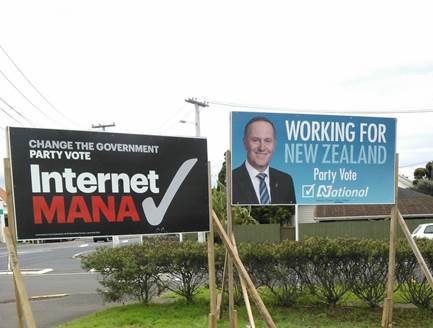 Not that Labour has nothing to match National’s unashamed promotion of party and leader. I have seen a handful of hoardings bearing just David Cunliffe’s image alongside the slogan “Vote Postive!” But when the local candidates’ images outnumber their leader’s by 10 to 1, the priorities are pretty obviously personal and local. The fundamental message of the MMP system: Only the Party Vote matters! is, once again, being studiously ignored by MPs whose only concern is to retain their seniority in Labour’s faction-ridden caucus.

What this will produce, just as it did in 2011, is the absurdity of Labour plummeting to 27 percent in the Party Vote, but capturing 32 percent of the Electorate Vote. Had those figures been reversed on Election Night three years ago, Phil Goff would now be Prime Minister.

The sad fact of the matter is that Labour’s old guard of deeply entrenched MPs no longer appears to care if National walks away with the Party Vote – or the General Election. Just so long as they keep their seats.

I’m old enough to remember the days when the honorific “The Honourable” actually meant something. Back then, MPs were referred to as The Hon. So-and-So because “honour” was presumed to be the one indispensable attribute of every person elected to represent their fellow citizens. Nobody cared whether or not an MP liked or disliked his or her leader. Nobody wanted to hear an MPs’ opinion about the party slogan or manifesto. Once all those decisions had been made, the voters expected their MPs to go out and promote their leader, their party, and their manifesto as hard and as often as they possibly could. And they did.

That Phil Goff is promoting himself alone, that his leader’s image is being relegated (as his own was in 2011) to the back streets, adds up, in my opinion, to just one bleak message.

Labour is heading for the worst defeat in its 98-year history.