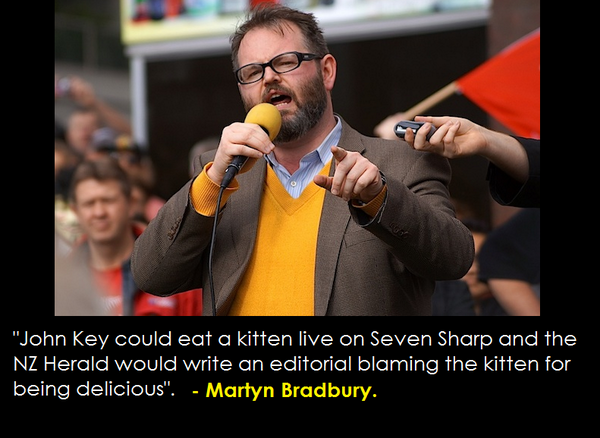 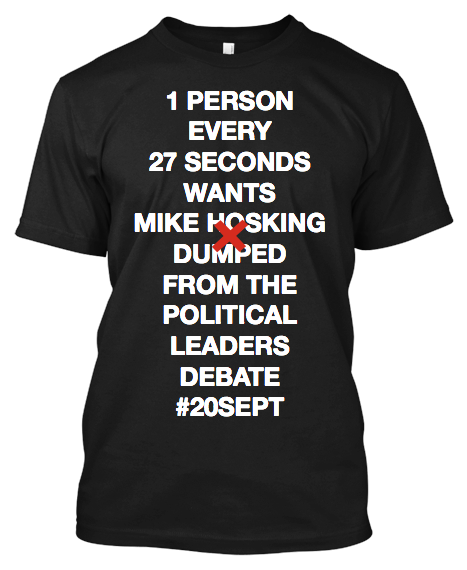 In just a day the petition calling on TVNZ to replace Hosking as the election moderator has jumped to over 2500, you can sign it here.

The defence that the Right are trying to run here is that John Campbell is also biased and Key isn’t complaining about that. There are a couple of glaring problems with the defence that Farrar, Whaleoil and the Government are trying to use here, the first is that TVNZ is the National Public Broadcaster where as TV3 is a private media company. TV3 can do what they like BECAUSE they are a private company, TVNZ however have a far wider and larger obligation for balance in the election year BECAUSE they are the National Public Broadcaster. The fact that this seems to have escaped everyone trying to compare Campbell to Hosking shows how weak and pathetic this line of defence really is.

“We have bright prospects for the future, so long as you keep them in Government.” – Mike on National
“He’s a “moron” for giving his state of the nation address on Auckland’s Anniversary Day” – Mike on Cunliffe
“Very few people worth $50 million get the real world better than Key.”
“Is David Cunliffe incompetent or mad?”

…see John Campbell has NEVER been that openly biased and as such is beyond scrutiny in terms of his professionalism as a Journalist and as a Broadcaster, Hosking on the other hand has become a commentator, not a Broadcaster.

We deserve balance from our National Public Broadcaster in an election year. We certainly haven’t had it all year, but we should demand it for the Election Debates. TVNZ has plenty

Yesterday I joked on Twitter that the Press Gallery would attempt to twist this entire story into one about Labour putting together dossiers on Journalists and I’m told to my immense pleasure that was exactly what some Press Gallery Journalists were trying to claim yesterday in Wellington.

Unfuckingbelievable – demanding TVNZ pretend to be balanced for two debates isn’t about the ego of the Press Gallery, it’s about the quality of our democracy you sanctimonious clowns!

…if the opposition win the election September 20th, real quality public broadcasting must be one of the top issues, and whoever in TVNZ thought appointing Hosking as an impartial election debate moderator should be the first one sacked.