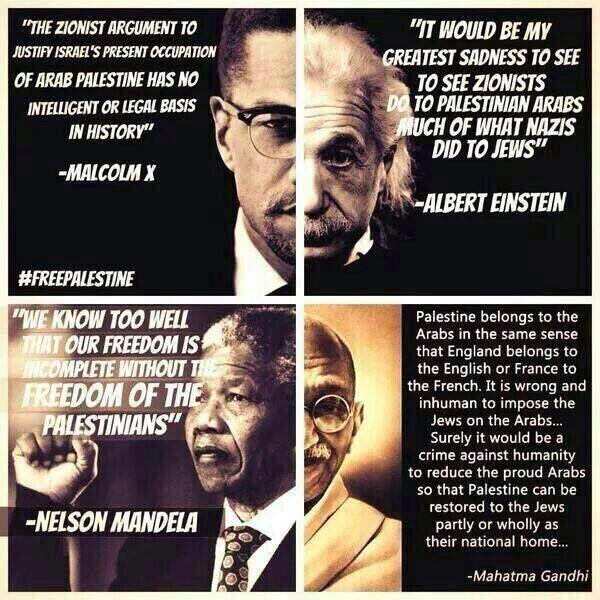 70 years ago the Jews of Europe suffered as much as any people can suffer. The Nazis set about ethnic cleansing and sent 6 million to their death.

Today we watch in horror as Israel, the Jewish homeland created after the Second World War, orders its military to bomb Palestinians who are refugees in their own land.

The use of a technologically superior military machine to kill and injure people living in their own land is a sickening violation of human rights. The current actions of Israel cannot be compared to the holocaust and the historical suffering of the Jewish people can never be dismissed. It is also wrong to excuse the current actions of Israel because of the past suffering. Murder is murder, dead is dead.

World leaders look for the conditions that will allow a ceasefire to prevail in Gaza and while that is an essential first step, there can be no lasting peace without economic and social justice. Israel is a land grabber and the land stolen is now deemed to be part of Israel.  This state of affairs is sanctioned by the United States and other Western powers.

In Israel and Palestine we have the juxtaposition of one of the richest and most technologically advanced nations on earth alongside people living in overcrowded slums with no resource base to forge their own destiny. Can we seriously expect a lasting peace in a situation where people are dispossessed of their land and live in poverty under siege while those who now occupy their land live privileged lives?

Achieving  a situation where all people living in the region lead dignified lives with access to human rights and decent work, good housing, healthcare and education is the recipe for peace.

The rationale for the recent slaughter of innocent civilians is the rockets being fired by Hamas into Israel. This is akin to boys throwing stones at a thug armed with an automatic rifle. The rockets are fired from desperation and anger at the gross injustice of the current situation.

Israeli PM Netanyahu refers to these rockets as a ‘mega terror attack’ and dismisses criticism of the number of civilian deaths by saying that this is what Hamas want to further their cause. Even if this were true, is this a justification?

It has already been commented on by Keith Locke in The Daily Blog and by the letter to the NZ media by Palestinian support groups that there is strong bias in favour of Israel in the reporting. It is not surprising that the media owned by the rich and powerful should side with the rich and powerful.  Palestinian fighters are referred to as ‘terrorists’ and ‘militants’ while their opponents are Israeli soldiers. Those fighting the State in the Ukraine are referred to as rebels or resistance fighters and they allegedly shot down a commercial airliner and killed 298 civilians who had no connection to the war zone. Why are the Palestinians not referred to as resistance fighters, soldiers or rebels? The ground invasion of the Gaza is a militant action and the bombing of hospitals is a terrorist act by any objective definition. Israel claimed Hamas hides weapons in hospitals when it was revealed on 21 July that Al Aqsa hospital became the third hospital to be struck by bombs or shelling during the current offensive.

For some Israelis the war is entertainment. On 20 July, ‘The Guardian’ reported that Israelis gather on hillsides to watch and cheer as the military drops bombs on Gaza. Near the border town of Sderot, locals assemble each evening to drink, snack and pose for ‘selfies’ against a background of explosions as the Palestinian death toll mounts. They drink beer, whoop and whistle as if it were a sports event as bombs rain down on a hellish warzone a few miles away.

An Israeli soldier posts an Instagram image of a Palestinian child in the crosshairs of a rifle.

Nobody knows where all this will end but of one thing I am sure. The world is about to become an even more dangerous place as we go about our daily business as more young men are attracted to Jihad. The war on terror multiplies the terror.

If we recognize injustice, we cannot claim to be innocent bystanders.