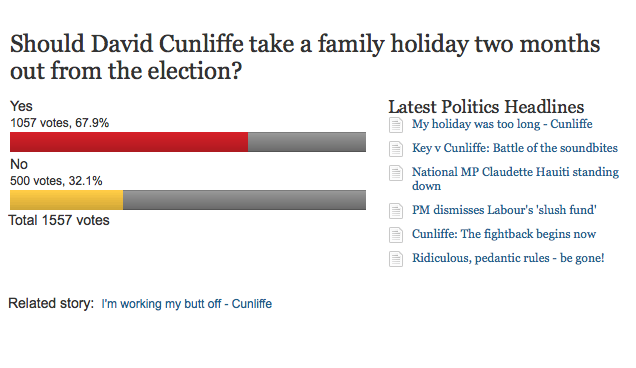 I’m not sure who the bloody hell is advising Cunliffe to apologise about a 3 day holiday, but it’s stupid. If you want to know what angry white reactionary NZ thinks about anything, go to a stuff.co.nz poll. Here’s their latest  sideswipe at Cunliffe… 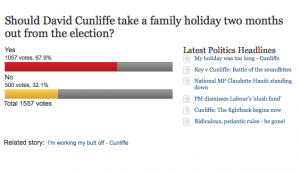 …angry white reactionary NZ says it’s fine for Cunliffe to take a holiday with the family.

Cunliffe is doing poorly in the polls because of a vicious character assassination by the media that isn’t helped by some inside Caucus sitting on their hands out of spite because the party members and affiliates forced Cunliffe as leader upon them. The right wing within Labour are desperately screaming for centrism despite Labour polling highest just after Cunliffe’s appointment and on the coat tails of some decent policy like the neo-nationalisation of the electricity industry.

Now is not the time to panic, now is the time to accept wall to wall negative headlines by a corporate mainstream media whose loyalty lies with National will impact the polls and that the real fight is during the campaign.

The narrative changes when Cunliffe finally gains a platform in the media during the campaign and front foots it with Key in the debates. The reality is that this election it will all be on Cunliffe’s ability on the campaign trail to win it and his performance will decide if he remains as leader.

As for the Labour Party insider who attacked Cunliffe, you best hope the blogs don’t publish your name before the election.