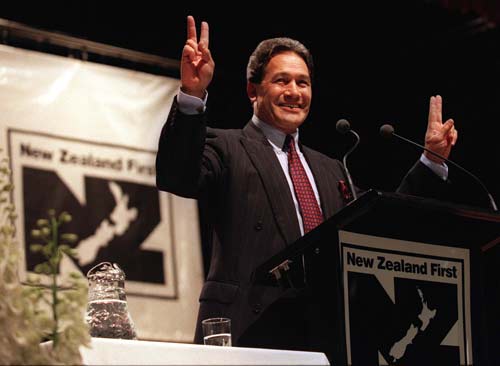 One of the rules of NZ punditry is to NEVER count Winston out.

The silver fox has snatched victory from the jaws of defeat so many times he seems immortal with a dislike for sunlight.

I love Winston, the way you love a slightly racist older member of your family whom you have deep enough affection for to overlook their more ugly personality traits. His mark upon the political landscape has been profound and at times brilliant (while also sometimes being horribly xenophobic), so it gives me no joy to suggest the following, but I don’t think NZ First are going to get over 5% for a couple of very specific reasons. I am sure that my learnerd blogger Curwen Rolinson can helpfully correct me on some of these points, but it seems to me that the energising factors that propelled NZ First over 5% last election are not prevalent this time around.

1 – Phil Goff’s candidacy was one of the most wooden in recent political memory. He made C3P-O look like a ballet dancer. Cunliffe’s talent is his oratory, expect Labour to woo back more voters from NZ First than it lost.

2 – This elections Tea Pot Tape scandal will be the Kim Dotcom Town Hall meeting, and there’s nothing in that for energising Winston.

3 – Winston the man himself. At 69, the great campaigner ain’t the boxer he was. One need only reflect on his terrible swing and miss with Judith Collins this year in Parliament to see that Winston is a tad punch drunk. He has set the bar so high in terms of his performances to date, it will be difficult I think for him to match his own high standards.

4 – Lack of a future. Beyond Winston, who does NZ First have? Tracey Martin is the only MP worth keeping, the others contribute little more than Parliamentary Tie updates on twitter. Now if that smart young Curwen Rolinson was in the running to be an MP, you’d have some type of future arrangement, but the cavalcade of stiffs currently crowding NZ First benches looks like it has about as much future direction as the Titanic.

It is this last point that suddenly breathes life back into Key needing to hand East Coast Bays over to Colin. If Conservatives can cannibalise NZ First votes to drop Winston under 5% while building the Conservatives up to 3%+ then dumping Murray in East Coast Bays becomes the only strategy.

If National were to pull Murray, my suspicion is that Labour’s response may well be to do the same and allow Winston to stand unopposed. Such a deal however would require a private understanding that Winston would set his bottom lines at a level that National could never meet. If Winston won East Coast Bays, he wouldn’t need 5%.

Coat tailing, a feature of MMP the Right have exploited mercilessly with ACT since MMPs birth may well decide the fate of NZ First, Conservative Party, ACT, United Future, the Maori Party and the Internet MANA Party as well as the next Government this election.