Headline: A Push to Give Steadier Shifts to Part-Timers

Reprinted from the New York Times Sharlene Santos says she and other workers at a Zara store got two days’ notice of their shifts, ranging from 16 to 24 hours a week. The company has promised to give two weeks’ notice.

As more workers find their lives upended and their paychecks reduced by ever-changing, on-call schedules, government officials are trying to put limits on the harshest of those scheduling practices.

The actions reflect a growing national movement — fueled by women’s and labor groups — to curb practices that affect millions of families, like assigning just one or two days of work a week or requiring employees to work unpredictable hours that wreak havoc with everyday routines like college and child care.

The recent, rapid spread of on-call employment to retail and other sectors has prompted proposals that would require companies to pay employees extra for on-call work and to give two weeks’ notice of a work schedule.

During the recent recession, those working part-time but preferring to work full-time skyrocketed. That number has slipped, but is still almost double where it started in 2007. The trend has been even more pronounced for retail and restaurant workers. As employers require ever more flexibility, part-time workers are often given short notice of their schedules — less than for full-time workers.

The new laws and proposals generally require an employer to discuss a new employee’s situation and to consider scheduling requests, but they do not require companies to accommodate individual schedules. Many businesses have opposed these measures, arguing that they represent improper government intrusion into private operations.

In a referendum last year, voters in SeaTac, Wash. — the community near Seattle that also passed the nation’s highest minimum wage, $15 an hour for some workers — approved a measure that bars employers from hiring additional part-time workers if any of their existing part-timers want more hours. The move was a response to complaints from workers that they were not scheduled for enough hours to support their families. Some San Francisco lawmakers are seeking to enact a similar regulation.

Representative George Miller of California, the senior Democrat on the House Committee on Education and the Workforce, plans to introduce legislation this summer that would require companies to pay their employees for an extra hour if they were summoned to work with less than 24 hours’ notice. He is also proposing a guarantee of four hours’ pay on days when employees are sent home after just a few hours — something that happens in many restaurants and retailers when customer traffic is slow.

That happened to Mary Coleman. After an hourlong bus commute, she arrived at her job at a Popeyes in Milwaukee only to have her boss order her to go home without clocking in — even though she was scheduled to work. She was not paid for the day.

“It’s becoming more and more common to put employees in a very uncertain and tenuous position with respect to their schedules, and that ricochets if workers have families or other commitments,” Mr. Miller said. “The employer community always says it abhors uncertainty and unpredictability, but they are creating an employment situation that has huge uncertainty and unpredictability for millions of Americans.”

While Mr. Miller acknowledges that his bill is unlikely to be enacted anytime soon — partly because of opposition from business (and a Republican-controlled House), he said the bill would bring attention to what he called often callous scheduling practices. His bill, similar to one in the Senate sponsored by Bob Casey, Democrat of Pennsylvania, has a “right to request” provision that would bar employers from denying requests from workers with caregiving or school-related conflicts unless they had a “bona fide” business reason.

Corporate groups protest that such measures undercut efficiency and profits. “The hyper-regulation of the workplace by government isn’t conducive to a positive business climate,” said Scott DeFife, an executive vice president of the National Restaurant Association. “The more complications that government creates for operating a business, the less likely we’ll see a positive business environment that’s good for the economy and increasing jobs.”

Mr. DeFife pointed out that the daily ebb and flow of customers necessitated flexibility in scheduling.

David French, a senior vice president of the National Retail Federation, said many people chose careers in retail because of the flexible work hours.

“These proposals may sound reasonable, but if you unpack them, they could be very harmful,” Mr. French said. “Where employers and employees now work together to solve scheduling problems, you’ll have a very bureaucratic environment where rigid rules would be introduced.”

While many of these workers are not unionized, the labor movement has often battled against part-time work and ever-changing schedules. But as unions have grown weaker, employers have felt freer to employ part-timers and use more volatile scheduling. Unions still push for workers to get more hours — and those pressures are one reason Macy’s and Walmart have adopted programs letting employees claim additional, available shifts by going onto their employers’ websites. 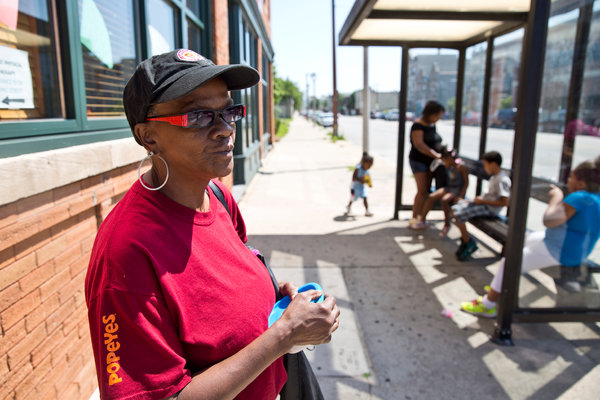 After an hourlong bus ride, Mary Coleman arrived for her job at a Milwaukee Popeyes restaurant, and was told to go home without clocking in, even though she was scheduled to work.

In a climate where many retailers, restaurants and other businesses are still struggling after the recession, economists point to the increased uncertainty faced by employees. About 27.4 million Americans work part time. The number of those part-timers who would prefer to work full time has nearly doubled since 2007, to 7.5 million. According to Bureau of Labor Statistics data, 47 percent of part-time hourly workers ages 26 to 32 receive a week or less of advance notice for their schedule.

In a study of the data, two University of Chicago professors found that employers dictated the work schedules for about half of young adults, without their input. For part-time workers, schedules on average fluctuated from 17 to 28 hours a week.

“Frontline managers face pressure to keep costs down, but they really don’t have much control over wages or benefits,” said Susan J. Lambert, a University of Chicago professor who interpreted the data. “What they have control over is employee hours.”

Ms. Lambert said flexible, not rigid or unpredictable, hours would become as important an issue as paid family leave. “The issue of scheduling is going to be the next big effort on improving labor standards,” she said. “To reduce unpredictability is important to keep women engaged in the labor force.”

David Chiu, president of the San Francisco Board of Supervisors, has created a business-labor group that is trying to find the middle ground.

“We’ve learned that predictability in hours is important not just to help workers juggle their lives, but for economic security — to help workers take a second job to live in expensive cities like San Francisco or New York,” Mr. Chiu said. “We’re confident that we can move forward with policies that work for workers as well as business’s bottom line.”

Sharlene Santos says her part-time schedule at a Zara clothing store in Manhattan — ranging from 16 to 24 hours a week — is not enough. “Making $220 a week, that’s not enough to live on — it’s not realistic,” she said.

After Ms. Santos and four other Zara workers recently wrote to the company, protesting that they were given too few hours and received just two days’ notice for their schedule, the company promised to start giving them two weeks’ advance notice.

Fatimah Muhammad said that at the Joe Fresh clothing store where she works in Manhattan, some weeks she was scheduled to work just one day but was on call for four days — meaning she had to call the store each morning to see whether it needed her to work that day.

“I felt kind of stuck. I couldn’t make plans,” said Ms. Muhammad, who said she was now assigned 25 hours a week.

A national campaign — the Fair Workweek Initiative — is pushing for legislation to restrict these practices in places including Milwaukee, New York and Santa Clara, Calif. The effort includes the National Women’s Law Center, the United Food and Commercial Workers union and the Retail Action Project, a New York workers’ group.

“Too many workers are working either too many or too few hours in an economy that expects us to be available 24/7,” said Carrie Gleason, director of the Fair Workweek Initiative and an organizer at the Center for Popular Democracy, a national advocacy group. “It’s gotten to the point where workers, especially women workers, are saying, ‘We need a voice in how much and when we work.’ ”