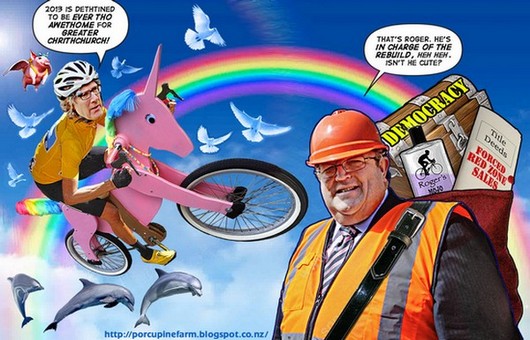 Labour announced that we would return decision-making to local organisations by immediately beginning to wind down CERA and cancelling its extraordinary powers.

The significance was lost on many, because many people assumed that what Labour announced was existing policy.  But that couldn’t be further from the truth. Roger Sutton and Gerry Brownlee have both been talking about a “progression plan” for CERA rather than a “transition plan”.  An interesting use of language that tells us a lot!  And they have made it clear that while the emergency powers of CERA may expire in 2016, that CERA will continue as a Government department overseeing the rebuild.

Labour’s plan is radically different.  A Labour Government will wind CERA down, with a view that it will no longer exist in 2016.  It’s current roles and responsibilities will instead be transferred to democratic local organisations – CDHB, Councils, ECan – with Government playing a support role.

Alongside that Labour announced an immediate return of democratic elections for ECan, probably in early 2015.

Equally significant was Labour’s announced that it would look at the cost-share agreement with fresh eyes and work in partnership with the Christchurch City Council to find solutions to the financial crisis created by the cost-sharing arrangement imposed by the current government on the previous council.

We said we wouldn’t prejudge the outcome of those discussions – but obviously that means the various cost-share projects could be delayed, cancelled or scaled back.  This is very significant, because it could release the Council from its binding cost-share agreement and help dig the Council (and therefore the ratepayer) out of a massive financial hole.