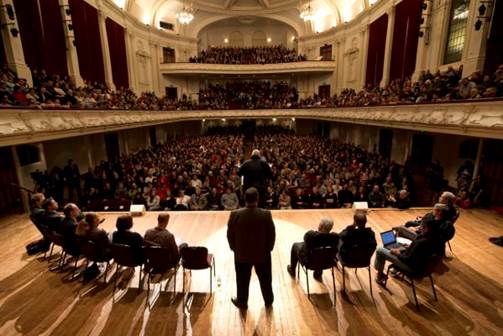 IT IS THE EVENING of Monday, 15 September 2014. The General Election is just five days away and the Auckland Town Hall is full-to-bursting. The Internet Party has made certain that every one of the 1,250 seats is occupied by making free tickets available to people online on a first-come, first-served basis. Many hundreds more are packing the rooms adjoining the chamber and, outside, Aotea Square is rapidly filling with people eager to follow proceedings on the giant video screen supplied by the man of the hour – Kim Dotcom.

The unprecedented public interest has been carefully nourished by the Internet Party’s constant drip-feeding of information to the news media. Week-after-week Laila Harre and her team have told the story of a small but proud Pacific nation transformed into the willing lap-dog of an overbearing super-power. At the centre of the narrative stands the Prime Minister of that nation: a man who stands accused of turning over to that super-power not only his country’s national security apparatus but its police force as well. Not simply to curry favour with the super-power, the United States, but to expedite the commercial agenda of the giant media corporations making up the Motion Picture Association of America (MPAA).

As the story has unfolded, other individuals and organisations have been drawn into the action. In the light of everything that happened afterwards, New Zealanders have been invited to examine afresh the events of late October 2010. The anti-union hysteria whipped up by Sir Peter Jackson and his movie industry allies over alleged “threats” to The Hobbit, and how this was used to justify the Government’s legal de-unionisation of the entire Kiwi movie industry has come under particular scrutiny.

Union leaders and spokespeople from the New Zealand Council for Civil Liberties are also in the Hall. They will draw the linkages between John Key’s willingness to let the core institutions of his country be used to the advantage of foreign corporations and the dramatic erosion of union and citizens’ rights. They mean to show how transforming New Zealand into a desirable destination for direct foreign investment necessarily entails the elimination of every civil institution and law capable of challenging those investors’ priorities.

But it is Kim Dotcom himself that thousands of Auckland voters have come to hear (and that many more thousands will follow on the Internet).

The Internet Party leader, Laila Harre, pulls no punches in her introduction. She does not ignore Dotcom’s past convictions and pokes gentle fun at his childlike delight in spending money. But then, having acknowledged these failings, it is to his unlooked for and unwanted role as the symbol of what can happen to an individual when all the malignant powers of big business and the state are ranged against him that she turns. What he proposes to tell New Zealanders, she warns, may sound like a grudge-match between two men, but it is much more than that.

If the Prime Minister of New Zealand regards telling his people the Truth as a mere option, as just one more weapon in the arsenal of political spin, to be used whenever it serves his purposes and which possesses no greater or lesser moral weight than a more politically convenient lie, then New Zealand’s democracy is at risk. And what does “National Security” really mean if it can only be defended by such duplicity and falsehood? What could possibly require such ethical surrender to keep safe?

The Town Hall and the now overflowing Square outside erupt in thunderous applause.

Kim Dotcom rises from his seat and walks towards the microphone …