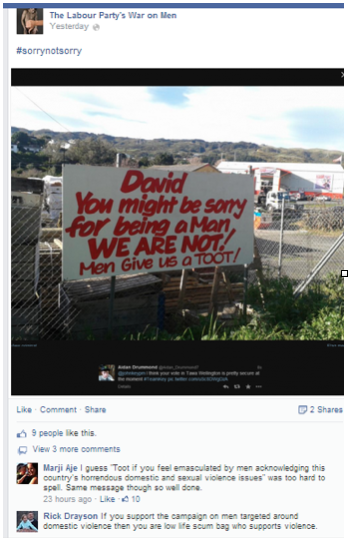 Men’s masculinity is under attack in New Zealand and four people, one of whom is a woman (it always stings that little bit more when a woman is pushing anti-feminist ideas), have created a Facebook page to do something about it. Sound your battle cries: 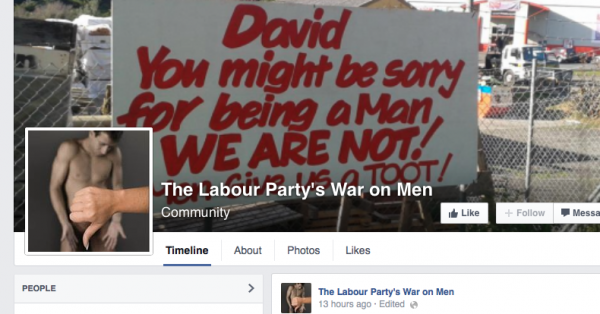 I don’t know why I was surprised to see this page pop up on my Facebook feed? After all David Cunliffe’s apology for being a man in relation to the epidemic of violence that women face has caused a lot of men (mainly white men) to get pretty upset . Then to add insult to some men’s injuries, the Labour party recently announced it will undertake a monumental shift in how rape cases are reviewed in court if it gets into power. As The Independent reported, “Political party wants to reverse the burden of proof in rape cases if it gets into power, making defendants prove their innocence to reduce the trauma suffered by victims”. Labour’s actions, according to ‘The Labour Party’s War on Men’ Facebook page, are obvious attacks on men’s rights, masculinity, and perhaps even their cocks as the page suggests:

“It’s only a matter of time before a penis tax is proposed by Labour in their war against men.  Let the nutters know men are more than just potential rapists”

O.M.F.G! First of all, I am not even going to bother with the “penis tax” comment for obvious reasons. And secondly, this is the “not all men” argument again, only worded differently. Sneaky! Guess what, fuckknuckles? Men can be raped too! Labour’s law reversal, where the burden of proof would fall on the accused, not the victim, does not just apply to women who have been raped. It protects all rape survivors, making the court process for victims less brutal.

Perhaps this Facebook page was started by four people who think men cannot be raped? NEWSFLASH: it is estimated 15% of adolescent boys will survive sexual assault and as .mic reported, the time of disclosure for male rape survivors is usually 20 years after the assault. This is a long time for millions of men in the world to remain silent about the trauma they have survived. As Martyn Bradbury pointed out this morning in relation to this Facebook page “How insecure in your masculinity must you feel to buy into believing Labour are declaring a war on men?”

Labour’s law reform brings up the murky topic of “consent” – something many people seem to have issues defining or even explaining.  Instead of giving knee jerk reactions to Labour’s law reversal – like the ‘The Labour Party’s War on Men’ Facebook page – we should take this opportunity to discuss issues around sexual consent. After all people seem to be confused by what the word “consent” actually means? David Farrar explains,

“Think about all the times you have had sex with someone, and how often could you *prove* consent”.

David, when I have sex with my partner we ‘check in’ a couple of times with each other during sex to make sure we are both ok – this does not interrupt sexual intercourse, it lets me know my partner cares about me and my sexual needs and boundaries. This is called sexual consent.  When we first got together we had extensive conversations (also known as ‘mental foreplay’) about what we would like to do with each other sexually. This is called sexual consent. After a year and a half together we still ‘check in’ and make sure we are both comfortable with some of the sexual acts we are performing, even if we have performed these acts before. This is called sexual consent. These conversations also lead to more orgasms because we have become acutely aware of what gets each other off – conversation around consent can be sexy.

If you are too embarrassed to discuss consent and what gets you off sexually with your partner (David Farrar I am looking at you) then you are obviously too immature to be having sex in the first place. So do the world a favour and keep it in your pants.

The main issue commentators and those posting on the facebook page in question, have with Labours proposed law reversal, that will only apply in rape cases, is they believe it is an attack on the presumption of innocence until proven guilty beyond reasonable doubt, it is not.  As the New Zealand Herald stressed, being innocent until proven guilty would, obviously, remain.

New Zealand has one of the lowest conviction rates for rape in the western world, only 1% of all rapes result in a prosecution. Our justice system is failing rape survivors. Labour’s law reform is a monumental step that, if passed, will make the court process for survivors less harrowing and humiliating. Broadcaster Rachel Smalley points out, “If you look at the percentage of sexual violence cases that result in a conviction, it’s pathetic. The system is not working. Something needs to change. Rapists walk free every week.”

To say this law reform is an attack on men’s rights, as the facebook page ‘The Labour’s war on men’ makes claim, is to deny the reality men are survivors of rape to, further silencing their voices.

Here are just some of the *facepalm* comments and posts on ‘The Labour’s War on Men’ Page:

I could not have said it better myself than this response: “Toot if you feel emasculated by men acknowledging this country’s horrendous domestic and sexual violence issues”. Hint: don’t toot unless you want to look like an uneducated jackass.

A small minority of women do falsify rape claims however, it is estimated to be between only 2-8%. Displayed below is what I, and many feminists friends call “perpetuating rape myths.” 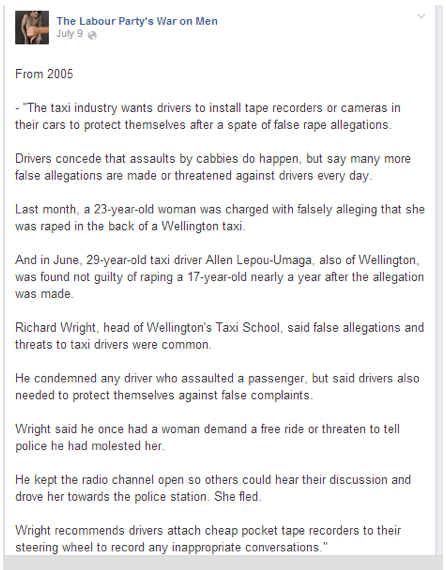 Feminism is evil and obviously sexist (yes, the poster is a female – women can be anti-feminists too):