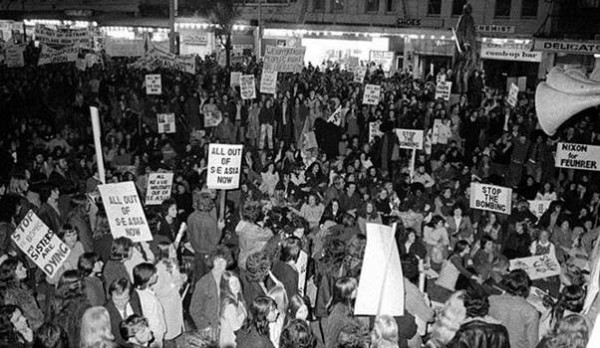 A DECISIVE FACTOR in New Zealand’s left-wing electoral victories has been the upsurge in progressive civil engagement which preceded them. In its turn, this increased politicisation has lifted the level of electoral participation. In circumstances of heightened civil engagement the ordinary citizen experiences a growing feeling of politics being “in the air” and the act of casting a vote is more easily presented as “making a difference”. At length, even the politically disengaged begin to take an interest, and since political disengagement is disproportionately associated with the young, the poor and the socially marginalised, it is hardly surprising that an up-tick in participation from these groups can make a crucial difference to the electoral efficacy of the overall “Left Vote”.

Let’s flesh out this proposition by examining the three periods immediately preceding the decisive Labour victories of 1972, 1984 and 1999.

This confidence was boosted by the widespread public perception that “the times they were a-changing”. Young people – especially the tens-of-thousands who were yearly taking advantage of New Zealand’s “free” tertiary education system – were making their political presence felt on the nation’s streets in protest demonstrations of unprecedented size and impact.

The 1971 “mobilisations” against the Vietnam War featured simultaneous demonstrations in the university cities of Auckland, Wellington, Christchurch, Dunedin, Hamilton and Palmerston North. The combined turnout of these protest marches represented roughly 1 in 4 of the country’s university students. They were joined by thousands more progressive New Zealanders from the churches and the trade unions. On Friday, 30 April 1971, more than 30,000 citizens participated in anti-war protests across New Zealand.

The trade unions themselves were increasingly by-passing the now discredited Arbitration Court and deploying the strike weapon against their employers. Acute labour shortages left employers with little option but to settle and wages rose accordingly. Working-class New Zealanders’ political confidence grew by leaps and bounds. The Federation of Labour’s conservative National Executive struggled to keep pace with the jaunty aspirations of the unions’ rank-and-file.

In 1970, 264,907 people (10 percent of the country’s population!) signed the “Save Manapouri” petition – imprinting the issue of environmentalism on to the nation’s political consciousness for the first time. This potent example of “post scarcity politics” was followed by the creation of the Values Party. In 1972 this plucky political arriviste, chock-full of visionary inspiration, so spooked the Labour Party that their full-page election advertisements featured a graphic of the New Zealand environment (including a forest-destroying deer) safely bottled up in, of all things, an Agee preserving jar!

By the time the election rolled around, politics wasn’t just “in the air” – it was filling the air. The 1969 turnout had been a very respectable 88.94 percent and crucially for Labour that number – three percentage points higher than the turnout in 1966 – held firm in 1972. This time, however, the Norman Kirk led Opposition won 677,669 votes or 48.4 percent, and National 581,422 votes or 41.5 percent. The massive upsurge in civil engagement described above had challenged the complacency of the old and politicised the young. Labour’s winning slogan: “It’s time for a change” was resoundingly endorsed.

The three years separating 1981 from 1984 saw the huge outpouring of progressive energy occasioned by the Springbok Tour channelled into a series of long-term hegemonic projects that have yet to end.

The turnout in 1981, at 91.4 percent, was even higher than 1969 and 1972. The near record number reflected the extraordinary politicisation of the country which the Tour had effected. That it failed to secure Muldoon’s defeat saw progressive politics bifurcate into the largely extra-parliamentary “New Social Movements” (Feminism, Anti-Racism, Gay Rights, Pacifism and Environmentalism) and the more traditional, class-based movements (trade unionism and the working-class political parties). There was, of course, a lively intercourse between the two which saw the Federation of Labour endorse the Working Women’s Charter and the Labour Party establish its enormously influential Women’s Council.

The 1981-84 period also marked the high point of the “New Cold War” and its answering response – the movement for a Nuclear-Free New Zealand. The extent to which this movement permeated the New Zealand population is extraordinary – as evidenced by the succession of county, borough and city councils (representing two-thirds of the population) which declared themselves nuclear-free between 1980 and 1984.

Finally, there was the creation of the unemployed workers’ rights movement. Astonishingly, at least to younger politicos, this movement was state-subsidised. Unemployed Rights Centres received grants not only from the trade unions but also from government agencies, and their full-time staff were paid courtesy of government work schemes. For the first time since the 1930s, the poorest and most marginalised citizens had a voice. (Interestingly, the Fourth Labour Government very quickly eliminated this kind of state support for the unemployed workers’ rights movement.)

This mobilisation of New Zealand’s most marginalised citizens probably explains the truly extraordinary turnout for the 1984 General Election. At 93.7 percent it holds the record for the greatest percentage of registered voters ever to have participated in a general election. Labour was swept to power in what should have been an undiluted triumph for the Left. The full explanation for why it very quickly turned into something else must wait for another occasion.
1999

The Neoliberal Counter-Revolution which remade New Zealand in the years that followed 1984 reached its zenith in 1991 with Bill Birch’s long-prepared Employment Contracts Act and Ruth Richardson’s savage “Mother of All Budgets”. Had both been answered as they should have been, with a General Strike from the unions and mass demonstrations by the unemployed and beneficiaries, the following decade could have been one of unprecedented and radical politicisation culminating in the eventual election of a government committed to rolling back neoliberalism in toto. Tragically, the 1990s turned out to be anything but.

In April 1991, the treachery of the state-sector union bosses (actively encouraged by the officers of the Council of Trade Unions) put paid to the General Strike motion advanced by the private sector unions – immediately condemning hundreds of thousands of wage workers to the steady erosion of their workplace rights and the relentless deunionisation of their industries.

And because the unions did not rise, the sympathetic effect of a general strike upon the other groups under attack from Jim Bolger’s National Government never eventuated. The natural alliance of wage workers and beneficiaries which had already begun to take shape as tens-of-thousands took to the streets in late-March and early-April 1991 was brutally aborted by the CTU’s treasonous failure to effectively resist the Employment Contracts Bill.

The inevitable and entirely predictable result of this historic failure on the part of the New Zealand labour movement was a steady decline in the turnout of registered voters at general elections. Twenty-seven years after that record 93.7 percent turnout in 1984, the number of registered voters participating had slumped to just 74.2 percent – the lowest turnout recorded since the advent of universal suffrage in 1893.

There were, of course, a succession of bold and extremely sincere opponents of the neoliberal counter-revolution – the most effective being those heroic champions of the MMP cause who, by securing a narrow victory for proportional representation in the referendum of 1993, successfully resisted the corporate sector’s well-funded campaign to preserve the manifestly unfair FPP system.

But not even MMP could undo the terrific damage inflicted upon New Zealand’s political system by the Fourth Labour Government’s abandonment of social democracy in favour of neoliberalism in the 1980s. This fundamental political derangement not only split the Labour Party but, by driving National sharply to the right, inspired its more moderate elements to form NZ First. Subsequent to Labour’s ideological apostasy, all politics in New Zealand has been about how best to navigate around the black hole where the centre-left used to be.

The NewLabour Party, which soon became the Alliance, was the best effort to rebuild an electorally viable alternative on the Left. By 1996, however, its relentless struggle against what remained of the Labour Party had severely shaken the electorate’s faith in the entire Left’s ability to govern. It is for this reason that the first MMP coalition government was the one formed between National and NZ First.

Turnout for that first MMP election, at 88.3 percent, was the highest since 1984, and between them National and NZ First secured 47.2 percent – more than enough with the votes of the avowedly neoliberal ACT Party to form a government.

Racked by internal strife and the insuperable contradictions inherent in any attempt to merge the neoliberal and conservative ideologies into a single project, the National-NZ First Coalition Government was soon reduced to an incoherent collection of rabid ideologues and disreputable turncoats. Seizing the moment Labour and the Alliance announced their intention to govern together in a loose coalition and the scene was set for a “left-wing” victory in 1999.

But the Labour-Alliance victory (augmented by the electoral success of the Green Party which had left the Alliance in 1997) bore almost no resemblance to the victories of 1972 and 1984. Yes, there had been some protest activity – mostly centred around tertiary student fees and, to a lesser extent, environmental issues – but it paled in comparison to the mass actions of 1971 and 1981. Overwhelmingly, politics had become a matter for organised parties. The extra-parliamentary impetus which an effective trade union movement, peace and environmental activism, and the struggle against Apartheid had given to Left politics as a whole in the 1970s and 80s was absent.

The 1999 turnout, at 84.1 percent, represented not a rise but a falling away in political enthusiasm. Bluntly, Helen Clark became Prime Minister because she was not Jenny Shipley. And when Big Business complained about the radicalism of her Alliance partner she was quick to reassure the bosses that socialist measures would pass only over her dead body.
2014

As the General Election of 2014 approaches, the signs of any sort of upsurge in civil engagement are few and far between. Certainly, the kinds of mass protest and the forcing on to the agenda of wholly new political issues and priorities which were the precursors of the great electoral transitions of the 70s and 80s are almost entirely absent. A dreadful inertia pervades the body politic: an unwillingness to be moved by any cause or even any outrage. It is hard to believe, looking back at the conscience-driven civil eruptions of our recent history, that we are the same people.

The National Prime Minister, John Key, recently told Radio New Zealand’s Morning Report that when Labour was last in power, National voted for two-thirds of its legislative programme, and that since he’s been Prime Minister, Labour has voted for two-thirds of his. It was an extremely shrewd statement, because the only New Zealanders who could possibly object to such a cosy arrangement are those who desperately need politics to be about difference. And the only way to secure the success of transformative politics is for the young, the poor and the socially marginalised to, once again, become engaged in the processes of change.

The very thing that, currently, they are either unable, or unwilling, to do.