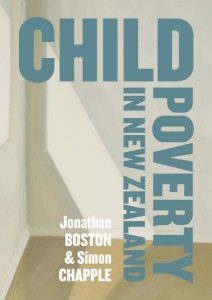 Child poverty is best tackled by tackling poverty as a wider whole. New Zealand has many single people, and other poor households without children, who are also in poverty. Unlike children, we tend to class impoverished adults as the deserving poor; we write their poverty off as a consequence of their own imperfect choices. Nevertheless, in more sanguine moments, most of us realise that the impoverishment of any reflects badly on all. We have a collective duty of care to all; no exceptions.

Intractable individuals aside, poverty is a result of unequal market power, an unprincipled tax-benefit system, and our own lack of imagination. It’s accentuated by debt, which is also, for many, the only solution to a problem where immediate needs outstrip our financial resources.

One of the main targets of the anti-child-poverty campaign is the ‘In-Work-Tax-Credit’ of $60 paid to most “working families” with children. The IWTC is income-tested only for such families who earn too much to receive any other component of the ‘Working for Families’ income-support package.

The problem is at the lower end of the income scale. The IWTC is payable to non-employed parents whose partners work at least 30 hours per week, but is denied to parents without partners who do less than 20 hours a week of paid work. Some working parents no not get it while many nonemployed parents do get it.

As I understand it, the view of both the present government and its predecessor is that ‘beneficiary’ parents do get this payment, but under another name. The basic Sole Parent Support Benefit (formerly the DPB) is $299 per week, $90 more than the Jobseeker Support Benefit (formerly the Unemployment Benefit). We could easily say that the last $60 of a beneficiary’s benefit is in fact the IWTC; just under another rubric.

However some beneficiaries with children receive no more from public funds than do “working” families. Where there is a liable parent paying Child Support, the ‘benefit’ is funded firstly by that Child Support. If the father (say) of a child whose mother is classed as a beneficiary pays Child Support of $239 per week, then the (probably hard-working) mother’s $299 is equal to the Child Support plus the de facto IWTC. She’s not actually a beneficiary at all, even though she is presented in the government statistics as a beneficiary, and hence as a burden on the state. We can be quite loose with our accounting when we want to make a political point.

In previous postings (here and here) I have noted that we have an implicit public equity benefit (of $9,080 per annum paid in full to about half of all adult New Zealanders (and not much less for most of the rest) embedded into our tax-benefit system. In essence, every adult New Zealander has, as a right, an entitlement to a payment from public funds of about $9,000.  (For most New Zealanders, this is currently paid in the form of tax discounts; it is implicit, but could be accounted for in an explicit way, as a public equity benefit or dividend. The difference between an implicit benefit and an explicit benefit is an accounting issue only; not a policy issue.)

One of the key proposals to address child poverty is to extend the public equity concept to that of a universal benefit to children, a benefit payable as of right, not charity, to that child’s caregiver(s).

Much scepticism surrounds this proposal because a universal benefit is payable on behalf of children from poor and rich families alike. How then can it be a solution to poverty, the media proclaim?

Labour has announced that it will raise the trust tax rate to 36%, and bring in a new 36% marginal tax rate for personal incomes in excess of $150,000 per year.

This is what I think a Labour-led government should do instead. Certainly they should raise the trust rate to 36%. But they could simply raise the present 33% rate to 36%, at the present threshold of $70,000. And they should allocate the funds from the present IWTC, plus some of the extra revenue from the 36% tax rate at the lower threshold, to create a Universal Child Benefit (UCB).

The new child benefit should be at least $25 per week, thereby restoring the purchasing power of the $6 Muldoon Family Benefit. This would be a welcome addition to the disposable incomes of our desperately needy ‘beneficiary’ families. It would however reduce the disposable incomes of some ‘working’ families with just one child; families who currently receive this windfall of up to $60 a week.

The UCB would acknowledge the extra costs that all parents face, vis-à-vis non-parent households. Higher-earning parents would however face higher taxes with higher incomes, so those who really do not need this benefit would not receive more disposable income. Those on high incomes without children would contribute most to the replacement of the IWTC with a UCB.

Further, such a tax policy, if implemented, would do what Labour governments should be doing: levying slightly higher income taxes, and paying a higher public equity dividend. If the proposed 36% tax comes in at $70,000, the tax system itself would change from one with a 33% core (ie undiscounted) rate and an implicit public equity benefit of $9,080, to one with a 36% core rate and a public equity benefit of $11,180. This $11,180, if properly universalised, could make serious inroads into the wider problem of poverty in New Zealand.