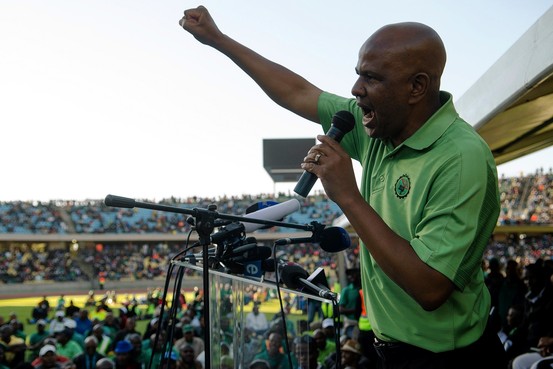 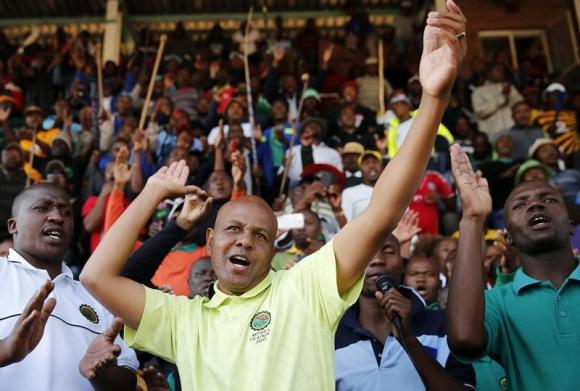 A five-month strike by 70,000 platinum miners in South Africa concluded at the end of June with the miners declaring victory over both the mine bosses and the ANC-led government. Both has sought to starve the workers into submission and failed. This has been followed by a strike by 220,000 members of the National Union on Metal Workers of South Africa (NUMSA) beginning July 1. NUMSA has also called for the formation of a new socialist political movement for working people to be established next year and is preparing to lead that process.The platinum mine strike hit 40 percent of global production of the precious metal and has cost Lonmin, Anglo American Platinum and Impala Platinum a combined 24 billion rand ($2.5 billion) in lost revenue. The country’s economy shrank 0.6% in the first quarter from a year earlier, the first quarterly contraction since 2009. The agreement will apply only to members of the the Association of Mineworkers and Construction Union (AMCU), which accounts for roughly 80% of employees at the main platinum companies. AMCU was formed following a split with the ANC-led National Union of Mineworkers (NUM) which was increasingly seen by many miners as a pro-boss union made up predominantly of skilled workers and managers.The political transformation of the ANC from an instrument of struggle for the liberation of the people of South Africa to an instrument for big business domination is exemplified in the history of one man, the current deputy president of South Africa and of the ANC Cyril Ramaphosa. Today he is a billionaire mine boss who was formerly the secretary-general of the NUM in its initial period of mass growth and militant strikes following it founding in 1982. In 2012, during a previous strike at the Lonmin platinum mine of which Ramaphosa was a director and shareholder, he called for the police to take action against the miners. Subsequently dozens were shot – most in the back, in what came to be called the Marikana massacre. The current ANC Secretary General Gwede Mantashe is also a former NUM secretary-general. In that role he tried to sack the current AMCU President Joseph Mathunjwa in 1999 from his role as local chairperson of the NUM following a sit-down strike by 3000 miners in his area. This action led to the formation of AMCU.The Guardian newspaper headlined the results of the most recent strike as: ‘End of South Africa’s platinum mine strike signals end of ANC domination’. The article by Stephen Grootes noted: “This strike has its roots in politics, in inequality, in poverty, in apartheid, and in the Marikana massacre. It’s about the lack of change, a lack of trust, and a lack of something to lose. Workers and their families lived with no money, believing that this was a fight they had to win for the future. It was funded, if you like, by their hope for change. That is really what is needed here, change.”Grootes concludes: “Perhaps the biggest lesson, that we kind of all know and sort of ignore, is that our country has simply not changed enough over the last 20 years. It is simply not good enough that we still send thousands of unskilled black people under the ground, knowing that if they break their bodies for 20 years they will still be in the same desperate position afterwards. It’s also not good enough that the communities they come from are probably poorer now than they were 50 years ago. It is often claimed that apartheid is over. Not for these miners; they live it every day. We have to end it for them too.”Gillian Schutte and Sipho Singiswa reported first hand of the sense of euphoria among the striking miners and their families. They are filmmakers and social justice activists who work at Media for Justice. They wrote:“The stadium in Phokeng outside Rustenberg exploded in jubilation when the end of the longest strike in South African history was announced on June 23. Men and women waved their arms victoriously in the air and resounding ululations and cheering reverberated as a great burden of domestic hardship lifted. Workers had changed history. They had valiantly resisted the dogged state and corporate attempt to smash their strike despite the personal hardships that they had to endure to reach this point. It was they who dealt a blow to capital because it was they who held out determinedly and who accumulated five months of unpaid accounts, became black listed, kept their kids out of schools through necessity and went without food. They are indeed, the central heroes in this story.

“Five months is a long time to go without – but it is what you do when you want to change history,” says Andile, a community leader. “We had told ourselves that we will not give up – that united we are going to break this economic hold over us, and we did.” He thrusts his fist into the air defiantly.

Outside of the stadium a group of women are dancing and singing under a tree. Their ecstasy is palpable as hips are flung around joyously. We approach them and they gather around us all talking at once. We single out Nomzi Jikane whom we interviewed a week earlier in the long queues waiting for food parcels from Gift of the Givers. She is breathless and excited, but when we ask her what this means for her she lets out a long and exhausted sigh.

“The stress levels have been so high here,” says Jikane. “It is us women who have suffered, watching our children starve…but we supported our husbands’ choice to stay in this strike. And we were not starving because of the strike – we were starving when they were employed also. How do we work for nothing with nothing to show that we are employed? We only ‘survive’ on the money he is paid – we do not live. And we know that the government owns these mines too. Ramaphosa is a mine boss. But today we are showing them who is the boss…and it is us.”
The NUMSA union conference in December last year also called for the formation of a socialist political movement independent of the ANC and its uncritical ally the South African Communist Party. That would also mean an end to the formal “Tripartite Aliance” of the ANC, SACP and the Congress of South African Unions (Cosatu).The December NUMSA Congress resolutions affirmed the following points:2.1There is no chance of winning back the Alliance to what it was originally formed for, which was to drive a revolutionary programme for fundamental transformation of the country, with the Freedom Charter as the minimum platform to transform the South African economy.

2.2 The South African Communist Party (SACP) leadership has become embedded in the state and is failing to act as the vanguard of the working class.

2.4 In the struggle for Socialism, the working class needs a political organisation committed in theory and practice to Socialism.

3.1 In light of the above as NUMSA, we should call on COSATU to break from the Alliance. The time for looking for an alternative has arrived.

3.2 As NUMSA, we must lead in the establishment of a new UNITED FRONT that will coordinate struggles in the workplace and in communities, in a way similar to the UDF of the 1980s. The task of this front will be to fight for the implementation of the Freedom Charter and be an organisational weapon against neoliberal policies such as the NDP.

For this to happen it requires:

3.1.1. That our members and shop stewards must be active on all fronts and in all struggles against neo-liberal policies, whether these policies are being implemented in the workplace or in communities.