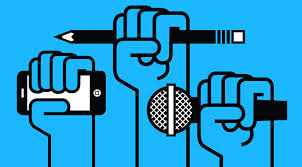 Café Pacific is on holiday with the publisher looking for “summer” somewhere in western Ireland. But this blog couldn’t stay on hold any longer with all the current shenanigans going on at Fiji’s University of the South Pacific.

Beleaguered journalism academics Pat Craddock, the acting regional media programme leader who is a New Zealand broadcaster and has long experience at USP and is widely respected on campus, and Australian author, educator and journalist Dr Matt Thompson, have stirred a hornet’s nest in administration circles over the past week because of their frank and defiant talking about media and freedom of speech issues in Fiji.

The controversy has stirred condemnation by Amnesty International and sparked a column by Roy Greenslade in The Guardian. In the latest statement by Craddock, published by Fijileaks, he has refused to be “silenced” by the university:

I WILL NOT be signing the letter sent to me as I do not accept that I have broken any codes, ethics or regulations except that I did not make it clear on the Media Release (MR) that it was my personal viewpoint.

“However, I have issued many MRs in my media work here [at USP’s Laucala campus] , which dates back to the early 1990s, and not one MR has ever been questioned by the USP except this last one. Future media releases will be clearly identified as coming from myself.

“I stand by my view that the original MR was accurate, balanced and a response to items that were already in the news arena.

“Before giving an interview to any media I advise them that the views are my own. I have followed the procedure during my many years at the USP and working for other NGOs and media.

“You and Dr Williams betrayed me. We had an informal conversation. That is on audio tape, yours and mine. There was no mention of further action.

“That night, the USP issued a strong and inaccurate statement. Next morning we met and I was asked to write a draft for the basis of a new media statement. I received no comment on the draft and then received your letter, which I consider a threatening statement. I acknowledged that I signed that I read the code of ethics. I did not say I broke any.

I have issued a Media Release today.

‘We don’t live in a normal democratic government situation’

This is a personal statement by the writer. It does not reflect the views of the USP.
THE UNIVERSITY of the South Pacific has issued an ultimatum to Patrick Craddock of the USP Journalism programme to sign a statement that would effectively silence him from talking to the media.

Craddock alleges that Dr Williams is frightened of upsetting the military government of Prime Minister [Voreqe] Bainimarama. He quotes Dr Williams saying during their only meeting:

“All of us understand that we don’t live in a normal democratic government situation.”

“…whatever we put out in the news media we are very careful..”

Craddock says Dr Williams told him during their meeting that the University of the South Pacific is a government institution and does not operate in a democracy.

Craddock alleges the USP letter is intended to intimidate him by suggesting that his actions may put the work permits of new staff at risk. The letter also asks him to refrain from making any adverse comments about the USP even after his contract ends.

The letter implies that he has behaved in a manner “prejudicial to the peace, good order, good government or morale” in Fiji by publicly criticising the military for justifying torture of dissenters and by criticising recent unfair treatment of journalists. Craddock believes his statements, made with a belief in academic freedom, are in the public interest.

The USP letter, which is released with this media statement, says there was a complaint from outside the USP. Who complained – was it the army, the police, MIDA, the Attorney-General? Craddock asked and was not told. The letter does not say if the complaint was upheld or even detail any due process to be followed.

In the informal recorded discussion, Heather Stadel of USP Human Resources says that the complaint came from inside the USP. She refuses to name the complainant.

The letter implies that there were inaccuracies in the Media Release. There were none. The army has admitted that they have tortured and beaten people. Samisoni Pareti, a Fijian journalist was denied accreditation to the recent Pacific Islands Development Forum. After the original media release was published he received an apology from the Ministry of Information. Another journalist, Netani Rika says he was visited by special police.

Craddock also alleges he was personally insulted by a fellow USP academic, Ashwin Raj [who is concurrently chair of the Media Industry Development Authority (MIDA)] during an interview with Radio New Zealand International. Ashwin Raj also commented on both USP journalism academics on the blog Fijileaks.

Raj signed his name and position on the blog as being on the staff of the USP. Craddock has lodged a formal complaint against Aswhin Raj with the USP Human Resources Manager, Heather Stadel.

IN: All of us understand …

OUT: we are a government institution funded by them.